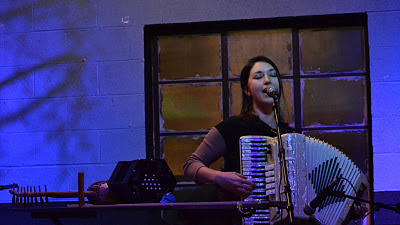 I love it when you go to see a band -- this time, my hometown compatriots Dirty Bourbon River Show -- and in the process discover something entirely new and unexpected. In this case, as is often the case, it was the opening band. But it's more than just the musical excitement that comes with finding a new band. It's the more general revelation, yet again, that there are... simply... still... entirely new and unexpected things to discover in the world. Even after, personally speaking, a rough year or two. Even after a jaded life of way too many live shows and bands.

I enjoyed DBRS immensely, and there's more on them below. But I had listened to and read a good bit about them already. However, I had only just heard of the opener, reading about the show earlier in the day. Crystal Bright and the Silver Hands are from Greensboro, NC, and led by (again, as I had just read) "multi-instrumentalist" and "ethnomusicologist" Crystal Bright. So I expected something rather interesting, maybe a little staid, a pleasant warm-up to the raucousness that is DBRS.

Crystal started by teaching the crowd, then asking us to join in singing, a simple, falling, melody. It was the opening melody for "Especially Your Mother" (from the upcoming release, "Muses and Bones"), which the band promptly kicked into as everyone sang. So we were literally made a part of the performance from the very beginning. What a wonderful way to engage the audience! This instantly set the tone for a friendly, comfortable, fun night.

Her bio rattled off a plethora of instruments to be expected -- accordion, musical saw, a Ugandan harp called an adungu, piano, various percussive instruments -- with the concomitant international influences. But what was unexpected was her main instrument: her voice. And WHAT a voice! 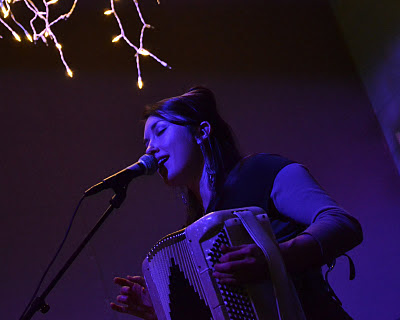 After the show, she told me she was just finding, or had only recently found, her voice. Are you kidding me? Despite all of the interesting, complex, novel things going on with this band, Crystal's voice was clearly the focus. Think Kate Bush with an earthier, less artsy, and more worldly bent. Like Bush, she has range and demonstrates it. Also like Bush (but unlike many female vocalists with range), she uses it creatively in ways that don't sound like she's just showing off. Crystal's voice is captivating and mysterious. 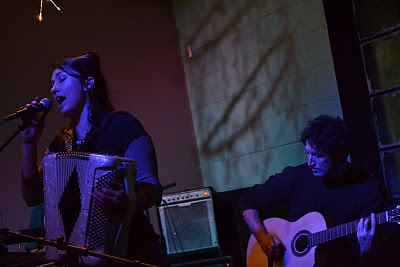 Meanwhile, she was usually cranking on the accordion, or bowing the saw, to danceable Eastern European, cabaret, or Spanish-flavored melodies, or to dark fairy/folk tales. Also meanwhile, the "Silver Hands" were being just that. Diego Diaz playsed electric slide and an excellent guitar, notably on the long Spanish traditional song, "Malagueña Salerosa". On other songs, such as "Toy Hammer" (see video below, tuba player from DBRS sitting in), he played the slide like a theremin, and its eerie sound harmonized with Crystal's vocals, adding to the effect. The standup bass and percussion were great as well. I've seldom heard a bass make so many different sounds, from high "electric" tinklings to tuba-lows. 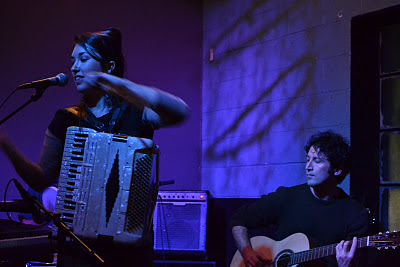 ">
Crystal Bright and the Silver Hands' show was a warm, welcoming, circus-like atmosphere, with a bit of a dark edge. Which could just as easily describe Dirty Bourbon River Show's performance immediately following... after adding a lot of brass (and a little drunken debauchery) to the mix. 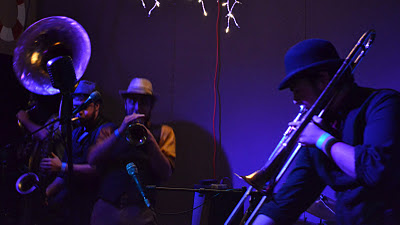 Both bands had the circus/cabaret thing going, with DBRS sounding perhaps a bit more vaudevillian. Both bands reminded me at times of Paris Combo -- who, like Crystal Bright, also mix Eastern and Western European sounds in the blender. But DBRS brought that down-home jazzy soul that I miss so much from my home. They mixed older styles with New Orleans funk, soul, and brass to get the crowd on their feet. 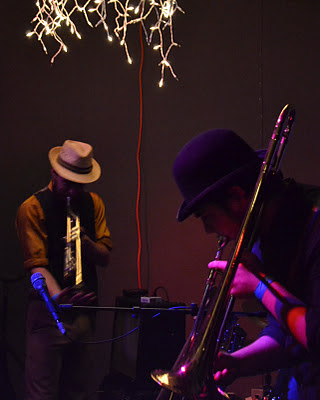 The multiple singers' vocals ranged from downright operatic to a soulful sound remininding me of Tom Waits or NOLA's Alex McMurray (ex-Royal Fingerbowl, now Tin Men). A full brass contingent complemented sometimes multiple guitars, turning the night into more of a "rock/revival" show, not unlike those of NC's Holy Ghost Tent Revival, with whom they have been known share a stage or two (and, I'm sure, a tailor). 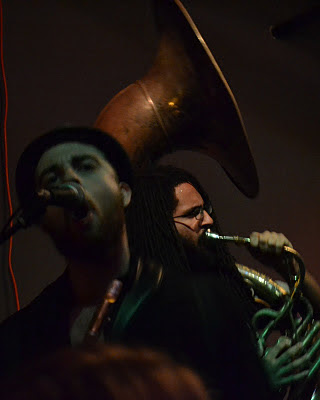 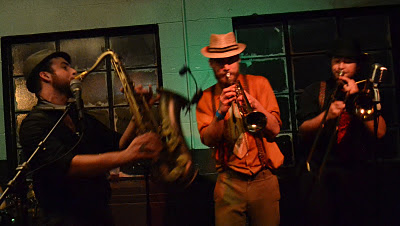 Their songs were often of women, and drink, and deals with the Devil... subjects so intertwined in that any one can, of course, lead to the other two. Late in the show, they encouraged a little audience participation of their own (though in a way more befitting their style). They quickly stomped out, then asked the audience to stomp along, to the thunderous intro beat to "Train Is Gone" (see video). We all happily complied. Near the end, their version of "Iko Iko" had me back home again.

">
That's what both of these bands did for me, and the crowd... they took us to other times and other places, some real and some surreal. It was a great, somewhat unexpected, show to start the new year. While each band has released excellent CDs, you're really not getting the full experience unless you see them live. I'm not sure when DBRS will be up in these parts next, but Crystal Bright will be performing with dancers (a performance art piece of some sort) in early March, at FlowJo in Carrboro.
Posted by Brother John on 1/14/2012