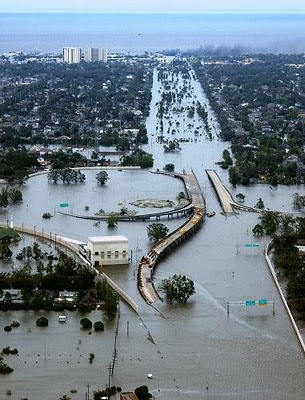 Five years ago today. I'll never forget hearing Jeanne Meserve's emotional report on CNN the night the storm hit, letting many people know for the first time just how bad things were. They were heroes, along with a handful of State Widlife and Fisheries personnel, local police, and firefighters, out there rescuing the few they could while thousands were stranded and hundreds drowned.

I'll never forget listening to my hometown drowned. And I'll never forgive the lack of federal response. These CNN reporters, and me, and anyone who was listening, knew then that many thousands were in immediate need of the most dire kind. They were DROWNING! I knew this. Anyone watching CNN knew this. (http://www.dailykos.com/story/2005/9/12/221834/305)

But apparently, Brownie, Chertoff, and yes Bush, were otherwise occupied. Can't blame them, right? They had TIVO. They could catch it later.

Yes, there was incompetence on the state and local level to a degree. Yes, they should have used their grant money and gotten radios that worked. Blah blah blah. But the newly written (after 9-11) National Response Plan explicitly provided for the Dept. of Homeland Security to take over all rescue and relief activity the moment they decided that it was an Incident of National Significance (triggering the Catastrophic Incident Annex to the plan), the moment it was clear that state and local authorities were swamped. I think we can all agree that state and local authorities were swamped. (http://www.firedupamerica.com/incident_of_national_significance (the link to the actual plan as written then no longer exists, as it's been re-written since; I thoroughly read it then and it DID say everything in this post).

So Bush stonewalling and trying to lay it on Blanco, saying she didn't formally request them to take over, trying to get her to sign over control of the LA National Guard: TOTAL BS! And I will go to my grave defending the evacuation (all other incompetence of Ray Nagin aside). It was much more efficient than FEMA predicted it ever could have been in a study done just a year earlier, and was the likely most thorough evacuation of a major city in the history of the United States.
The Republican-controlled congress at the time issued a report entitled "A Failure of Initiative" (http://www.gpoaccess.gov/serialset/creports/katrina.html) that, as anyone who was paying attention at the time would have, concluded that Chertoff should have declared an Incident of National Significance days before -- the Saturday before the storm hit as a matter of fact. This was the day Katrina ramped up to Cat 3 and the projection shifted to hit NOLA as a Cat 4 or 5. This was the day that National Guard General Russell Honore is on record as saying they were ready to move out and deploy IN New Orleans. This was the morning I called my parents to make sure they were getting outta Dodge.

If those in charge, at the federal level, had been at all competent and paying attention, hundreds who drowned could very possibly have been saved. It would not have been up to a few local officials (who had also lost their homes), and news reporters, and scattered New Orleanians who could get to their boats, to save thousands. Tens of thousands would not have sunk into anarchy and despair as the city flooded throughout the subsequent days.

And I won't even bring in the poorly (and federally) designed levee system.

Along with all of the victims, my brothers home was being deluged, as well as those of many friends and relatives, and my mother was evacuated, never to return, from her beloved New Orleans.

I will never forget this, or forgive this.
But I am so proud of the renewed civic pride in New Orleans, and of the way my hometown is rebuilding. It's not what it was. Of course in some ways, it's worse. But in many ways, it's better. I would urge anyone who can to visit, spend time there, and realize what we as a country almost lost.
(photo from Wikimedia Commons: http://upload.wikimedia.org/wikipedia/commons/9/9f/KatrinaNewOrleansFlooded.jpg)
Posted by Brother John on 8/29/2010 2 comments: