On the Anniversary of Katrina, and the Birthday of Isaac 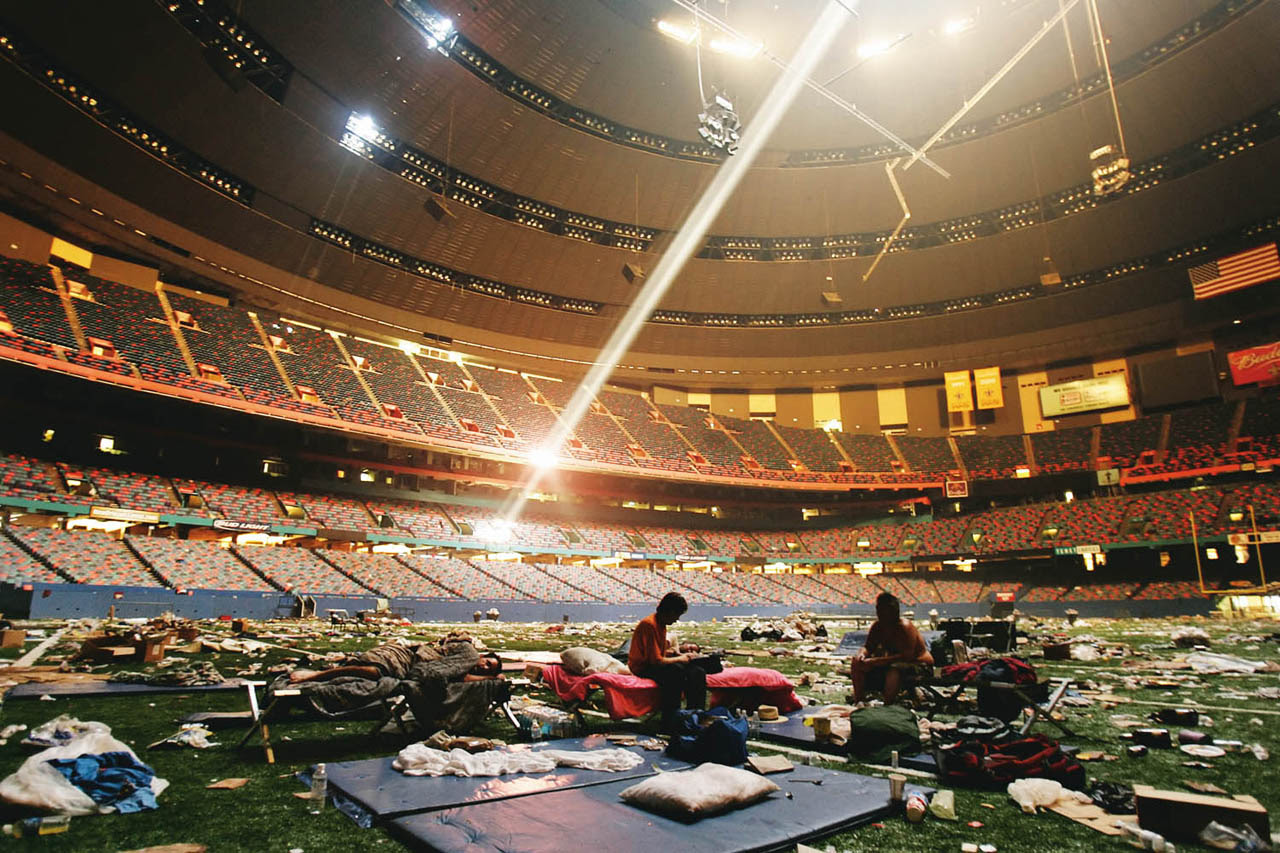 As my hometown New Orleans gets it's most direct hit since "the Thing" (as NOLA Pulitzer Prize-winning NOLA author Chris Rose called Katrina), ironically on that event's 7th anniversary, I find myself contemplating my own history as a hurricane survivor.

I'm just realizing that I've had direct experience with several of the very worst hurricanes in US history.  I've felt the only two Category 5 hurricanes to ever hit:  Camille from a distance in NOLA as it slammed Mississippi with 190mph winds, and Andrew when it came up to Louisiana, still packing Cat 2 winds at my house in Baton Rouge, 100 miles inland.  I visited both the Mississippi Gulf Coast and Miami days after each of those storms wiped communities off the map.  I still remember the pile of debris in Homestead that seemed 10 stories tall.  I remember driving through Mississippi pine forests -- whole forests -- where every tree was bent at a 45-degree angle... a Seussian nightmare.

I was rescued by boat from my home in the 9th Ward when I was only 3, by a young boy/guardian angel who took us to the local school.  No, I'm not 10 years old!  I'm talking Cat 4 Betsy, the worst in NOLA until K.  Here are my very earliest memories:  falling down in the stairs from the attic into the floodwater on the first floor, and looking out the attic window at the ocean in our neighborhood.  This is the history that informed who I was to become, as is the case with everyone else from a Gulf Coast town.

The education continued into adulthood.  My first hospitalization resulted from surgery made necessary by the clearing of tree debris (chunks of giant oaks) that had "settled" onto my front yard after category 3-4 Ivan landed a direct hit to my home of Pensacola.  That was the first time I saw an interstate taken out by a storm, the I-10 bridge blocks from my house (a feat Katrina would repeat in NOLA a year later).  Now, that long, nervous night in the closet will probably serve as my son's earliest memories, informing who he becomes.

We were smart and left for Dennis, which graciously provided us with a second direct hit from a Cat 3 in less than 10 months.  No one remembers Dennis, since he was so small, but CNN repeatedly re-broadcast Anderson Cooper watching the sign at my neighborhood Holiday Inn collapsing in front of him.  Then, just a month and a half later, came Katrina.  I felt in in Pensacola, but nothing like my family and countless others just to the west.  My brother lived -- still lives -- 4 houses from the big levee breech in Lakeview.  Luckily, they evacuated, as did the vast majority of New Orleanians.  But a flash flood made its home in their living room, and relegated them to the impromptu diaspora of scattered WhoDats, only to return to the comforts of a FEMA trailer after months in exile.  I resumed my tree removal service weeks after the storm, for my father, as he moved back to NOLA a widower.  My mother had died as an evacuee in Shreveport, never able to return to her beloved home.  We couldn't hold a proper funeral for her.  We held a memorial service many months later, when the city was safe and most had returned, and interred her ashes at historic St. Louis Cemetery No. 2.  Literally and figuratively, she now rests as part of New Orleans' history.

It is with no sense of narcissism that I relate these events.  That horrible fall 7 years ago, hundreds of thousands went through worse than the sum total of my experiences.  If anything, this is simply a cheap therapy for what is a sort of "barometrically-induced PTSD".  But these experiences have fostered in me an even greater appreciation for the capriciousness of life, and the awesomeness of nature, which I already had.  While they were a source of some excitement in my youth, they have since since revealed their true faces to me: tragedy and history and resilience.  This night, as little Isaac continues to batter NOLA with high winds and rain (and taking its good ole' damned time about it, I might add!), those in the path are calm, collected, and even better prepared than the last time.  And contrary to some opinion, they were very prepared for Katrina, and handled one of the worst man-made* catastrophes in US history with fierce determination and self-sufficience.

Tonight, those in New Orleans are steeling themselves, protecting their children, rolling with the punches, and planning to pick up the pieces.  I guess that really sums up how we should all live our lives.  Perhaps that's what my own hurricane experiences have taught me. 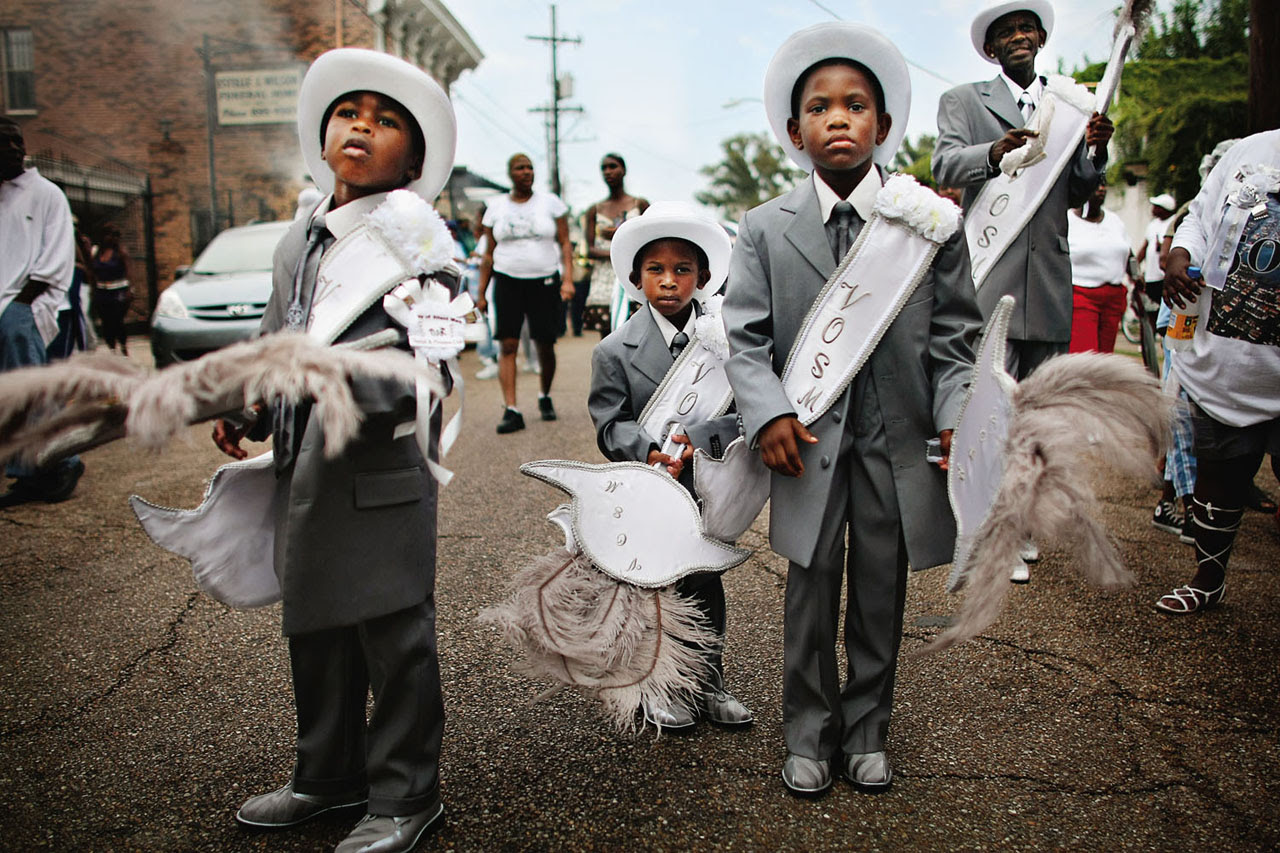 * Yes, man-made, not natural.  Most of the flooding has been unequivocally shown to be the result of catastrophic design failure of the floodwalls, a fact to which the Army Corps of Engineers has admitted.  To those who say "But why live below sea level?"  I would respond "Why live in the air?  Engineers design and build skyscrapers so that you can.  If they fall, you don't blame gravity."
Posted by Brother John on 8/29/2012 1 comment:

Here's a few photos of the Lollipops from the Pinhook two weeks back.  Iggy Cosky is onto something here.  Lollipops are very fun:  pop-rock-dance-indie... a regular festival of genre-bending.  Their new CD, Pop Narcotics, ranges from Stooges-swagger to 60's Wall-of-Sound to Elephant 6 weirdness...  and that's just in the first 6 minutes.

I had hoped to write more now, but it's been a hella couple of weeks (auto accident, autistic son struggling).  I really hope to make their show next Thursday at Local Beer Local Bands night (Tir Na Nog, 8/23/12).  But if I don't, at least you should.  They're playing with Greensboro's Estrangers and John Lindsay.  It should be a great show. 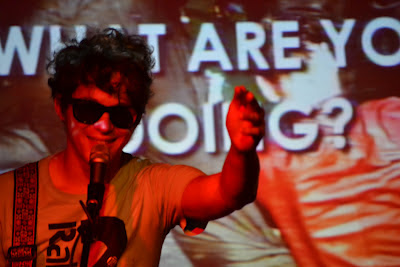 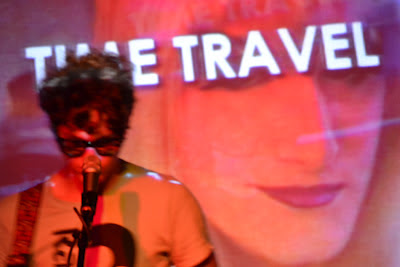 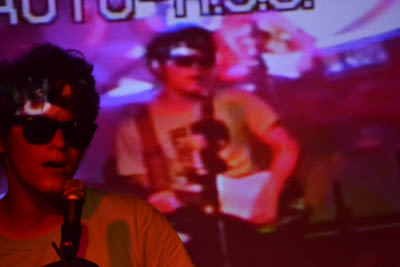 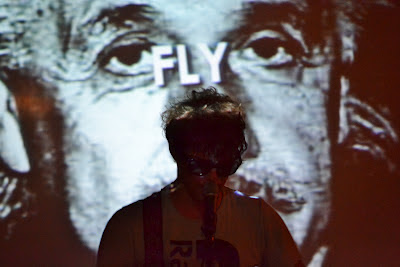 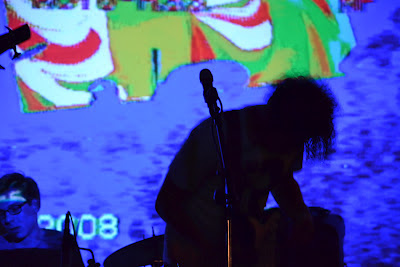 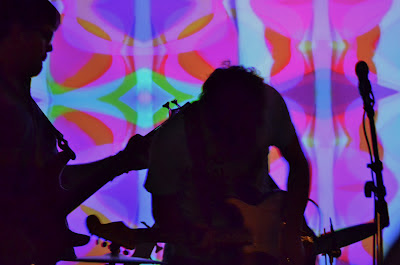 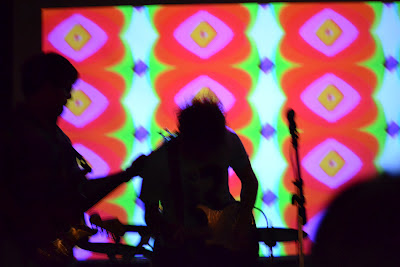 This is a video of Lollipops.  They are, unequivocally, my favorite new local band.  I will be writing about them more (and posting some show photos soon). But for now, here's You're Too Young...

(and DAMN! DiggUp Tapes knows how to find them some good music!)

Future Islands scheduled a last-minute show at Local 506 a couple of weeks back.  They asked locals Lilac Shadows to join them... a very appropriate opener.  I've written a couple of times about Lilac Shadows and their great EP, A Shallow Madness.  Suffice it to say their dark, dreamy pop is getting better and better live.  I heard a few new songs in there, and hopefully, they'll be recorded soon.  Here's a few shots of them, and more on Future Islands below.  Thanks to Adam Graetz for the great projection, which has made for some of my best photos in the past (Lilac Shadows, T0W3RS, Jenny Besetzt).  ﻿ 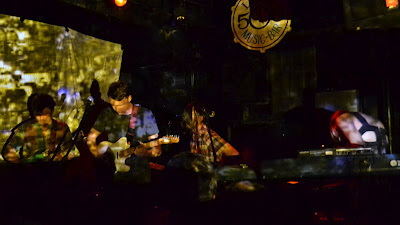 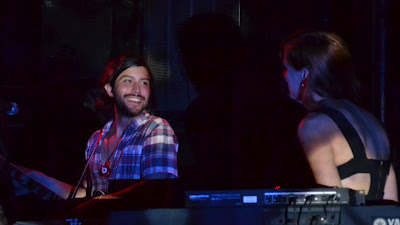 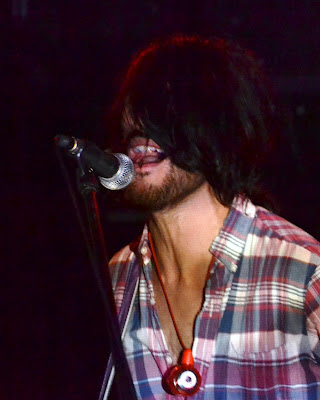 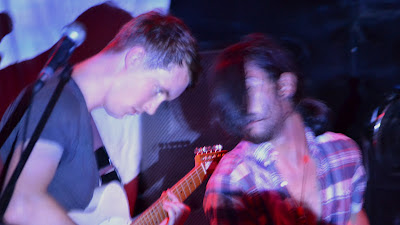 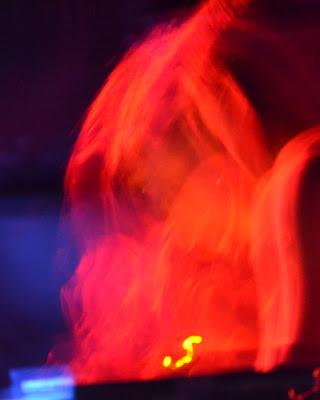 I hadn't gotten around to seeing Future Islands live.  This band with coastal NC roots now resides in Baltimore, and are usually bunched in with the techno/dance/pop crowd.  Not my usual thing, which probably explains my neglect.  But live, they are some other kind of animal altogether.  Heavy, emotional, almost sinister.  Harsh white floodlights from below added to this effect (as did singer Samuel T. Herring's choice of outfit, intentionally I'm sure).

Herring's vocals are operatic, romantic, and sad... a Pagliacci for the indie masses.  They're an acquired taste to be sure.  I hated Morrissey once upon a time, and only gave the Smiths a chance because of Johnny Marr's inventive and catchy guitar.  But it didn't take long before I couldn't see one without the other.  And Herring's voice has already grown on me.

In this setting -- despite minimal instrumentation of bass and electronic miscellany -- he is undoubtendly a ROCK singer in a ROCK band.  This is hard, heady stuff.  He speaks... nay, preaches to the audience, in between hyper-energetic, somewhat awkward jumps and dance moves.  It's an aggressive performance, almost with the feel (though not sound) of hardcore.  Future Islands have a big sound, for sure.  All the more unexpected considering the recent, rather muted, On the Water.  But I LOVE the ocean sounds and overall atmosphere of that album.

Anyway, here are some photos of Future Islands.  Shades of Joy Division on the last one (well, for the whole show). 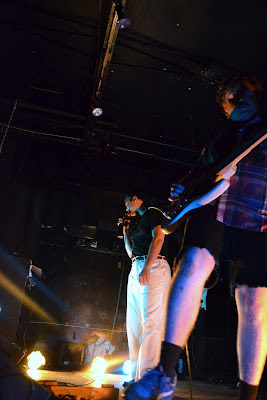 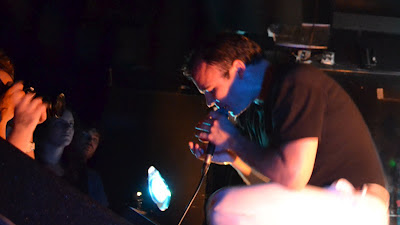 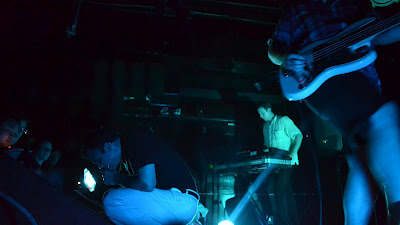 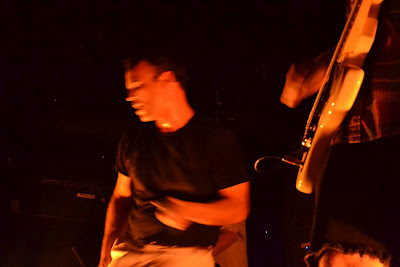 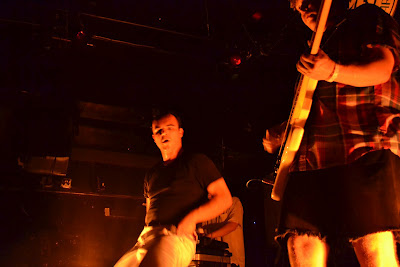 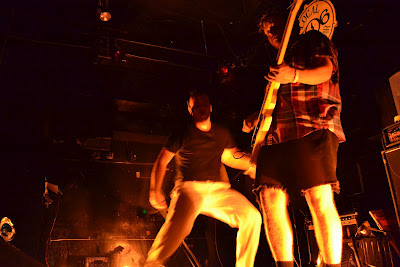 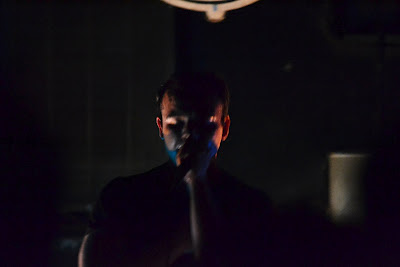