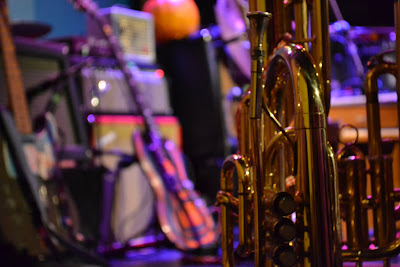 The Elephant 6 Holiday Surprise Tour passed through Raleigh Saturday night, playing Kings Barcade downtown. For the uninitiated, the Elephant 6 Collective is a group of musicians and artists loosely based in Athens, GA. It was started by members of the bands Neutral Milk Hotel, Apples In Stereo, and others, back in the mid-late 90s, when those bands were starting to make waves. It wasn't so much a label as a place for members to play together and support each others' art. Many Elephant 6 bands share or have shared members throughout the years. Some of the other bands falling under the umbrella of Elephant 6 include Of Montreal, Elf Power, Olivia Tremor Control, Circulatory System, The Gerbils, The Music Tapes, and The Sunshine Fix.

I remember back in the mid-90s, we at KLSU (Baton Rouge) were obsessed with Pixies, Superchunk, Sebadoh, GbV... the usual indie thing. But down in NOLA, WTUL was taking a more pop tack. They were playing these odd little happy/quirky records by acts like Of Montreal and Apples in Stereo. These bands were so far ahead of their time, college radio was even a little slow to pick up. But they just kept releasing and producing album after album of great psych/pop/weirdness. Today, I'd venture to say that more bands are influenced by Elephant 6 than by Nirvana and Green Day combined (okay, recording, touring bands, not 13-year-old kids in their garages). 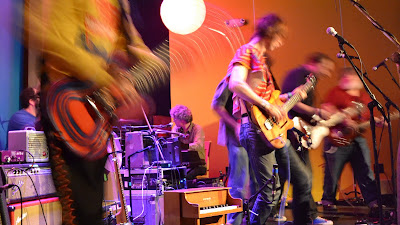 I always felt like I missed the boat somewhat on Elephant 6, and Neutral Milk Hotel in particular. There they were starting in Louisiana as I was hosting a college radio local/regional music show on just a few dozen miles south. I remember hearing about this obscure little album from a Ruston band called "On Avery Island", but by that time, I was no longer on the air. For those unfamiliar with NMH, their CD "In The Aeroplane Over the Sea" is widely considered one of the best albums in the past 20 years (or best ever by many, myself included). I asked NMH-members Scott Spillane and Julian Kostner after the show why I may have missed them (only Scott was with them at the time), and they said basically that they only played house parties and in North Louisiana for the first couple of years. After 2-3 years, they realized they could/should start touring. Jeff Mangum (NMH's front man) may have played a couple of shows in NOLA, but I never caught wind of them, much to my chagrin.

But there's always time to catch up, and this tour was a great opportunity for that. The reunion/supergroup/whatever tour that is Holiday Surprise was more like a family event than a show. These people know each other well, having played together on many an album and in many a band. They're all multi-instrumentalists, and they're also very much into having fun. They started in the audience, as the performers (scattered among the crowd) sang/chanted "You're going on a trip / your mind is not quite fit / your brain circuitry's abnormalities have brought you this...", making their way to the stage in the dark, and kicking into the first number. They bounced around from song to song by various E6 bands, leaning a lot towards Olivia Tremor Control... several members of that band were represented. "White Sky" (from the Gerbils), with Scott Spillane singing, was a standout. So was the poppy "Holiday" (OTC). Julian Kostner demonstrated his mastery of the musical saw, for which he is apparently quite well known. It provided an element of mystery and magic, just as it has on several Elephant 6 releases. 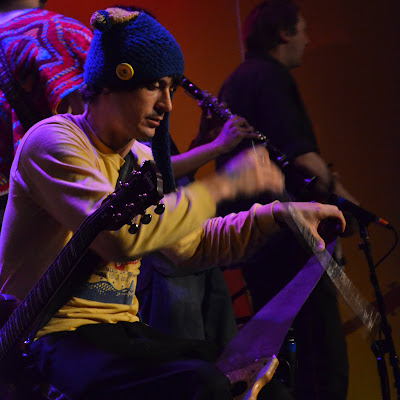 Wonderful stories were told, winter's end foretold (via a giant snowman throwing a snowball through the moon, with the help of an audience member), and the crowd was serenaded by a Mechanical Organ Playing Tower. Violins and various brass instruments were everywhere, the latter played especially sublimely by Scott Spillane. 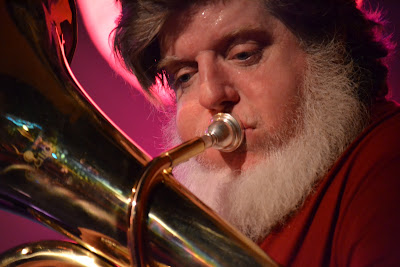 But mostly, Elephant 6 just rocked out... in the high-energy, neo-psychedelic, mode that is their penchant. The closing (Sun Ra's "Enlightenment") was another "kumbayah" moment. The band stepped back out into the audience and encouraged us to sing along, repeating the words to teach us. It must have gone on for 20 minutes before the members of the collective marched out, parade-style... tubas, trumpets, saws and all. The show clocked in at over 3 hours. 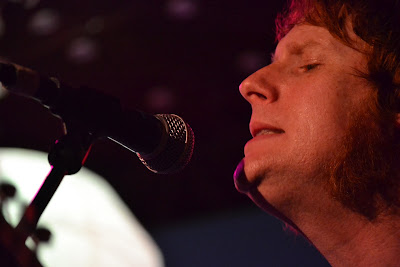 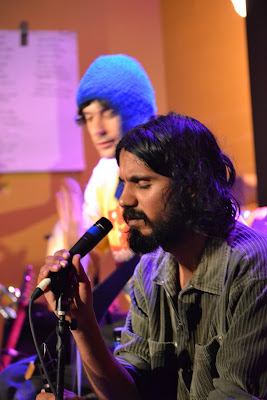 Although most indie-hipsters would never admit to playing the game de riguer of the night (and every night of this tour), they all were at least wondering: Would the notably reclusive Jeff Mangum show up, and maybe even play? No, he didn't make an appearance Saturday, as he did on the tour a couple of years ago. It's probably better for this tour, as his music is darker and of a different tone than most of the material they were playing. And the band didn't play any NMH (or Of Montreal, or Apples In Stereo) songs, either. The night didn't suffer for it, though. This bunch has a very deep catalog of good music to draw from, and it was a rollicking good time! Besides, for those into the Apples, frontman Robert Schneider will be playing a rare show in Durham (at the Casbah) in April.

So, all-in-all, the 2011 Elephant 6 Holiday Surprise Tour lived up to it's billing, and demonstrated that this collective of artists that has inspired so many already still has inspiration to spare. 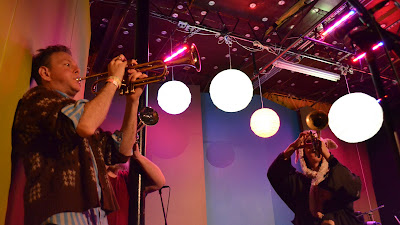 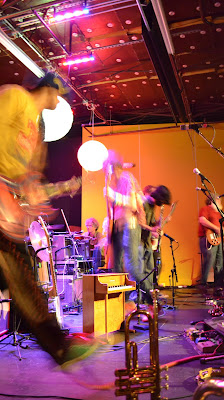 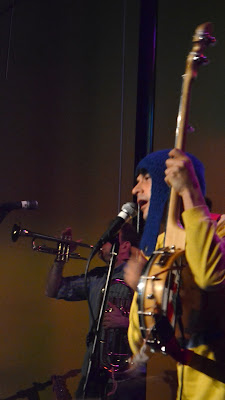 It was "Yip Jump Music!" (apologies to Daniel Johnston) 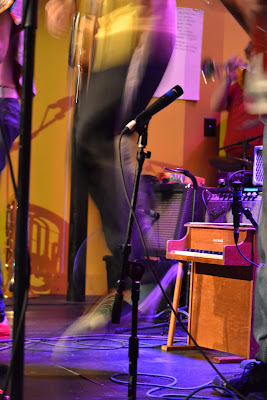 Baltimore duo Wye Oak played to a sold out crowd at Local 506 the other night. Although they've been described as "indie folk", the word "folk" is probably more an artifact of the minimal cast and instrumentation. One listen belies that minimalism. They create a lush, sonically drenched sound that wanders between shoegaze and soaring pop. Think My Bloody Valentine... a pastoral Sonic Youth. Andy Stack works drums, keyboard and loops like he's been doing it for years (and I guess he has), creating a backing band all on his own. Jenn Wasner's crisp, clarion of a voice can be at once soft and intense, and is the focal point of the band's sound. But I hadn't really taken full notice the first time I saw them, that she can really RAWK the guitar. Unfortunately, after this second show of their tour (their first was broadscast live on NPR... that's where all the buzz bands go these days, didn't ya know?), Jenn's voice gave out. There were a few painful looking coughs between lyrics this night. So they've cancelled the next show or two on the tour. Here's hoping she gets better so the rest of the country can enjoy the great show they gave Chapel Hill.

Here's a few pics of the show. 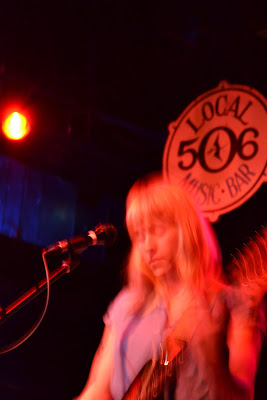 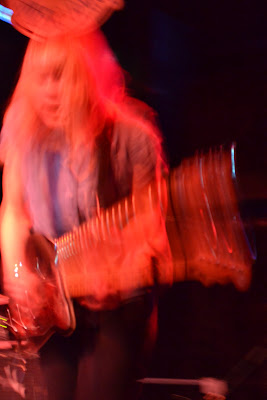 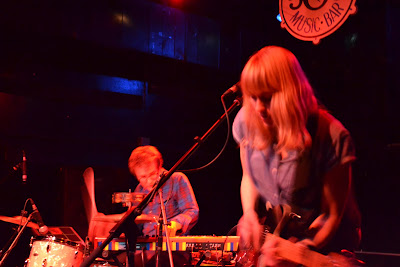 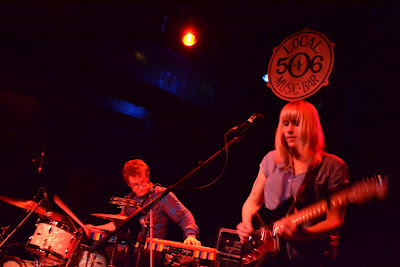 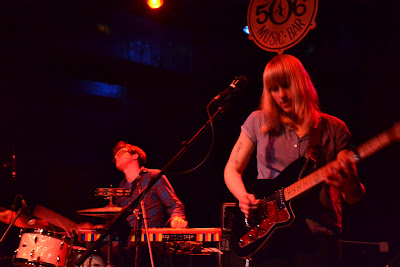 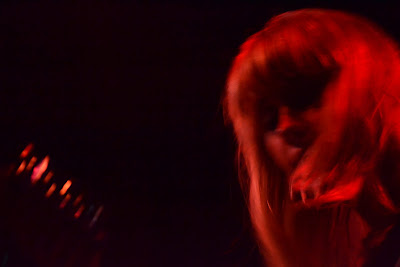