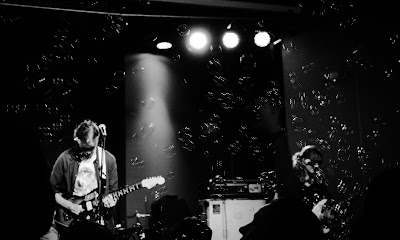 Continuing my chronicle of just an average Friday night in downtown Raleigh, after Granite In Reverse outside (see earlier post), I head indoors for what promised to be a fun 3-band bill at Kings Barcade.  All three acts share an affinity for mid-century pop, something I like to hear in new music after it percolates through the brains of today's kids.  I hadn't yet seen opening act the Dead Bedrooms.  They had perhaps the most straight-ahead-pop take... a little surfy and maybe a little '80s too.  They show real promise for a new band. 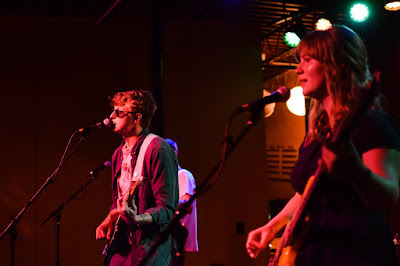 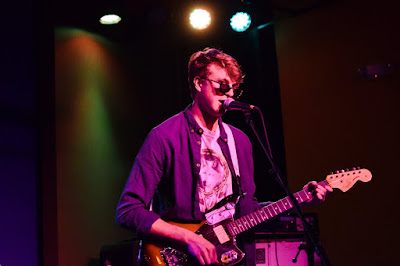 This was my second time seeing Seabreeze Diner.  They bounce crunchy dual guitars off smooth crooning, and filled the bigger room nicely (I'd seen them at the quaint, excellent but more quaint Carrboro venue the Station).  I'm not sure, but they might just like the Everly Brothers even more than Ghostt Bllonde's Marc Kuzio. 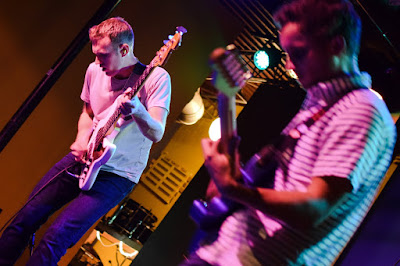 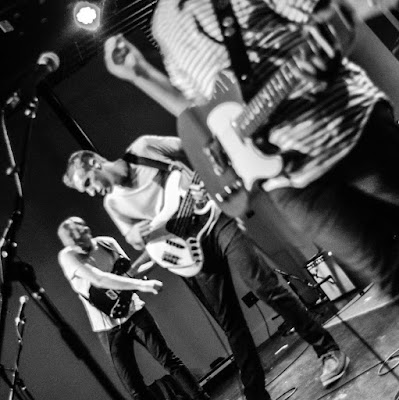 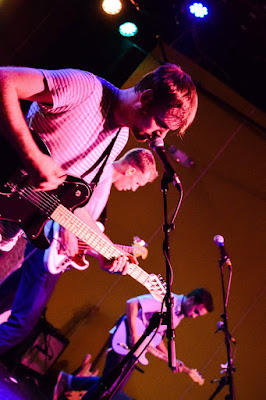 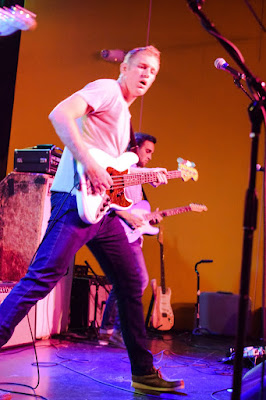 What can I say about Ghostt Bllonde that I haven't already?  (after several years, I think I finally have the "LL"s and the "TT"s right?  Oh yeah, I know... GET THAT DAMN ALBUM OUT GUYS!!!  I know they're close; judging from the updates crossing my feed, praising the work of the great Missy Thangs finishing it up at Mitch Easter's Fidelitorium studio. 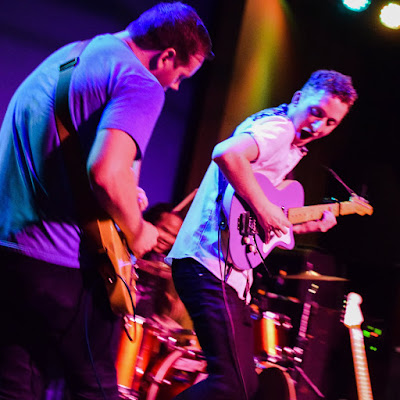 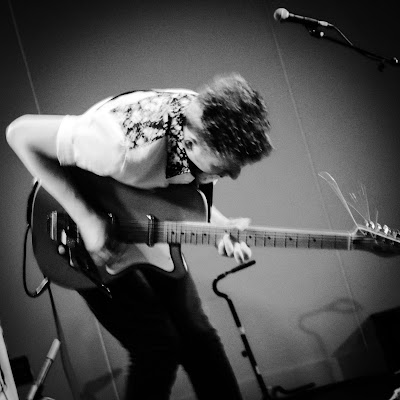 GB having some fun with SD... 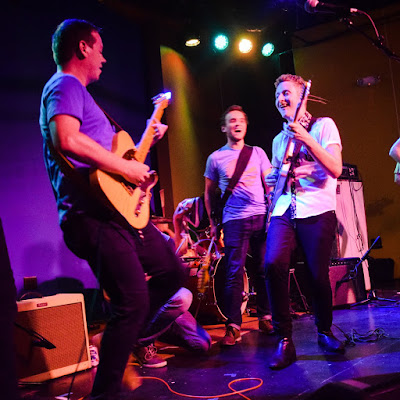 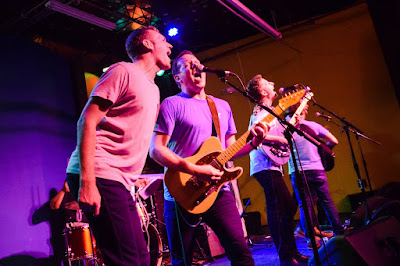 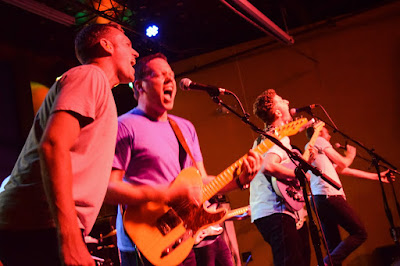 As I said, there was plenty going on this night.  Being a longtime fan of Indian music, Bollywood or otherwise, I had to check out a unique offering at Slim's called Garam Masala.  Advertised as "an experimental night of spicy selections", it featured a DJ, Gudiya, mixing South Asian sounds with electronic.  Altered the usual Slim's atmosphere into a more experimental, easy-going vibe... great for a post-show beer.  I even recognized a couple from the movies I used to watch much more often... think I heard Chaiyya Chaiyya, and maybe some Jazzy B.  Check out Gudiya's Sister Mix on her Soundcloud page. 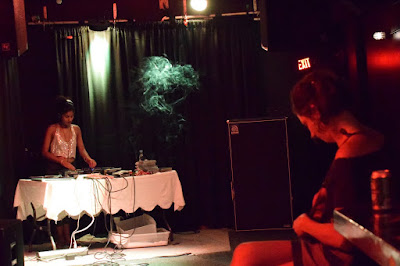 Here's a couple of videos from the King's show... 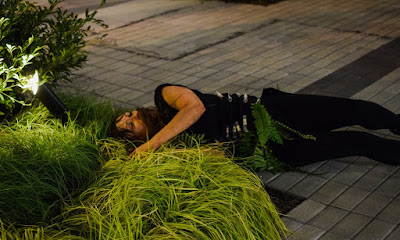 When I moved here about a decade ago, downtown Raleigh was a dead zone.  True, I was busy with two much younger kids and a wife.  I get out much more these days, as the former two are now much older, and the latter is no more... well no more my wife anyway, somebody else's :).  But even busy as I was with domesticity, when we managed to get downtown, there was NOTHING.  No events, no galleries, not even a decent restaurant (trailblazers excepted, I know there were a some brave pioneering spaces).

Now, it seems you can't throw a stick without that stick hitting something that challenges your artistic preconceptions or sates your creative palate.   One recent Friday night was a case in point.

I've appreciated the breath of fresh air that Ginger Wagg and Wild Actions have brought to the scene lately.  Wild Actions is a collective of performance artists, usually featuring Wagg moving silently and exploring a space in various ways (depending on the piece), accompanied by music, props, films, etc.  You might have seen Reflex Arc (Wagg and Crowmeat Bob on sax) opening for a band. Whatever the aim of the given piece--admittedly not always clear to me--you always come away with a different appreciation for the space, for sound (or silence), and for what art can be.

This time, the theme was somewhat more concrete (pun intended).  Granite in Reverse was a collaboration between Wagg and filmmaker Jaclyn Bowie.  It was inspired by Bowie's film, Geij, a short in which "a poisoned atmosphere is restored by a plant and its seeds."  In Granite... Wagg crawled and climbed around Exchange Plaza, stretching tendrils, leaves, and seeds over the cement and brick surfaces.  You could imagine in hundreds or thousand of years, that is inevitably what will happen... granite will degrade, nature will return.  On top of that, the "plant" offered the viewers a bounty!  Wagg placed little tamales of what tasted like corn and coconut.  Then, we placed the husks into a nearby sculpture, which took them in, "digested" them, and kicked out little pellets of totally natural um... fertlizer! (see video clips below).  It was a humorous end to represent the circle which will inevitably claim all that we, as humans, do.  Curiously, filmmaker Bowie was nowhere to be seen... ;) 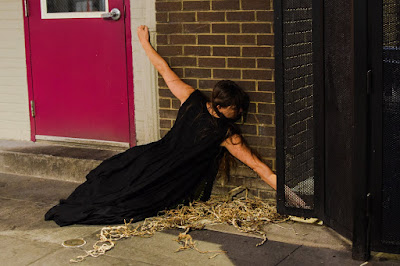 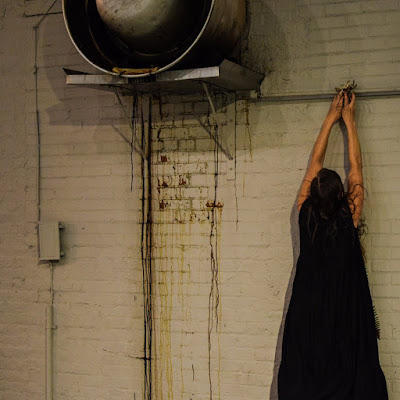 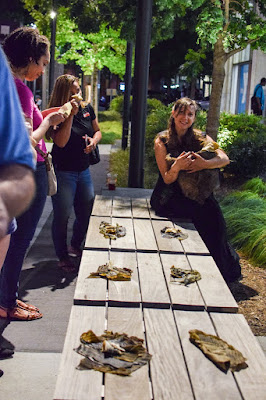 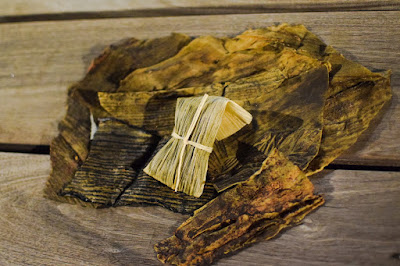 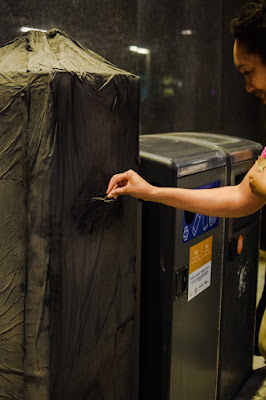 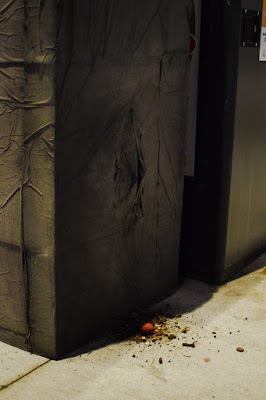 As alluded earlier, there was a lot going on around downtown this night.  I caught Granite In Reverse before heading over to Kings for some live music, then Slim's for some DJ action.  More on that in Part II...
Posted by Brother John on 7/26/2017 No comments: