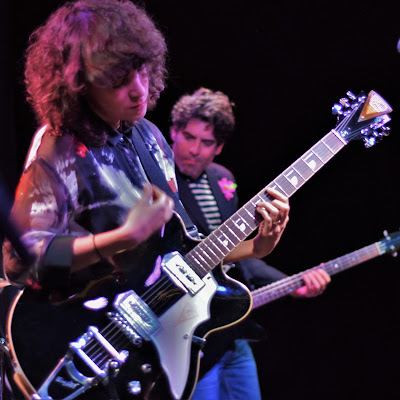 After howling like a wolf for Halloween at two fairly raucous rock’n’roll shows (see photos on my facebook page), it seemed appropriate to celebrate All Saints’ Day with a little mellower vibe.  Also appropriate was the coincident line-up of two Latino artists, being as All Saints’ Day (as we call it in Catholic NOLA) has become more-or-less supplanted by El Dia de los Muertos (which is MUCH more fun).
Not to paint Guatemalan native Gaby Moreno and opener Davíd Garza with too broad a genre-brush.  While Garza has been known to incorporate Mexican rhythms into his songs, he’s pretty much a straight-ahead rocker.  His unique and varied influences range from 1920’s popular music to Led Zeppelin… and pretty much everything in between.  Likewise, while Moreno is equally comfortable singing in Spanish or English, her songs are such a broad mélange of blues, soul, and Latin as to defy categorization.

Davíd Garza is what really planted this show on my must-see schedule.  I’ve been a fan of Garza since his little acoustic trio, Twang Twang ShockaBoom, were bangin’ on bongos and standup bass on the West Mall at UT Austin (early ‘90s, to stamp a date on both of us).  The bare bones set up was a great accompaniment to his classically-trained guitar chops.  As tapes trickled over to Baton Rouge and made their way into my grubby little hands, I couldn’t give them enough airplay on Saturated Neighborhood, the local-regional music show I was hosing on KLSU.  After Twang, several solo albums with a fully fleshed-out band quickly followed.  Man-Oh-Man, those were some FUN shows!  But since then, I’ve only seen him perform once.  He rarely plays shows outside of Texas or L.A., where he currently resides.  [Side note:  Davíd has been part of the music/comedy scene at Largo in L.A., which has produced some of my absolute favorite alt-comedians... Patton Oswalt, Paul F. Thompkins, Sarah Silverman, etc.]

In the years since Twang, Garza’s songwriting has flourished, proving him to be one of the most prolific artists working today.  He’s had his flirt with major-label success (see This Euphoria, which shoulda sold millions).  But his real strength is the range and consistency of his songs.  I assumed he’d play mostly new stuff off his recent April Fool CD, expecting just a taste of the old stuff.  Turns out, he placated the crowd, which was laced with other longtime fans who clamored for some older tunes.  The short set included several songs from Euphoria (Float Away, Kinder, Slave, Discoball World), along with later, darker tunes Drone and God’s Hands (one of my favorites).

If you’re not familiar with Garza, look up his 4 CD set, A Strange Mess of Flowers (on itunes etc), or Eternal Tambourine (on Bandcamp).  Both are extensive collections which showcase the breadth of his career.  Check them out; you won’t be disappointed. 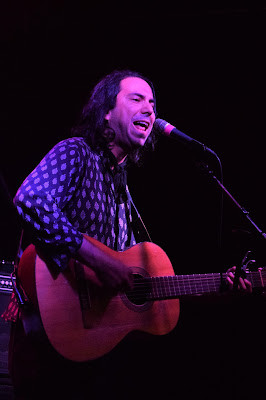 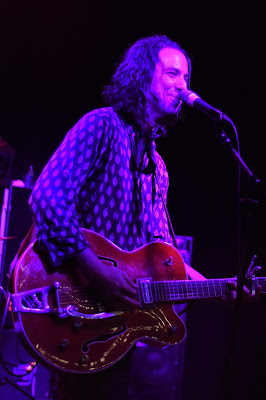 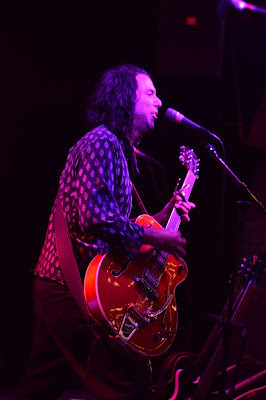 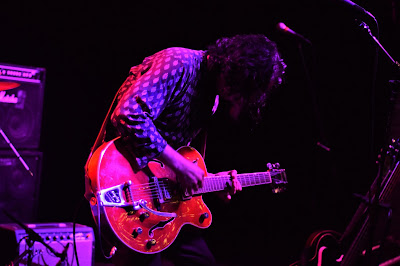 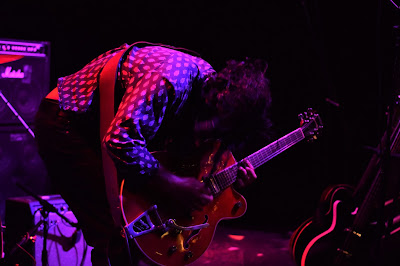 But for all my fawning over Garza’s music, the headliner, after all, was Gaby Moreno.  I’m new to her music, but can this woman sing!  And write.  And play.  SO soulful, her songs and voice both remind me of my NOLA.  At the very least, she and her band could blend easily into the New Orleans music scene.

Moreno has a growing following, receiving numerous accolades, including a Latin Grammy for Best New Artist in 2013.   Though a newer artist than her opener (and bandmate) Garza, she’s no slouch herself as far as output.  She’s put out a half dozen or so records in the past 7 or 8 years.  So the large crowd – especially for the early week, post-Halloween hangover slot – had plenty to sing along to.  And sing they did.  Quizás, Quizás,Quizás was a crowd favorite, and the title cut from her new album, Ilusión, was a quiet detour... a sweet, sublime ode to fantasy (see video below).

Now that I’m clued in, Gaby Moreno’s next pass through town will again be immediately planted on my must-see schedule… no matter who the opener is! 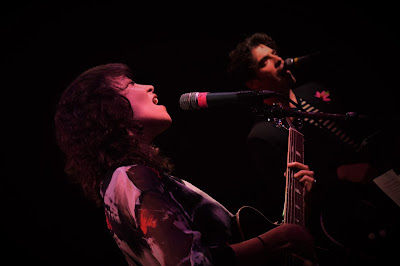 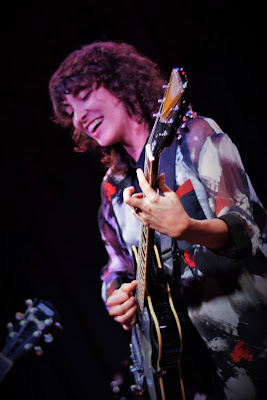 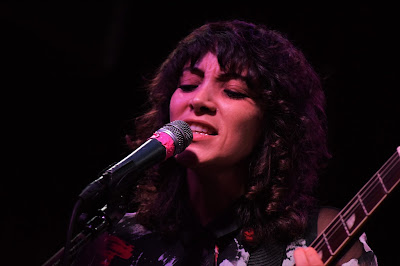 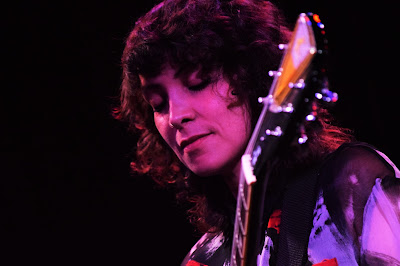 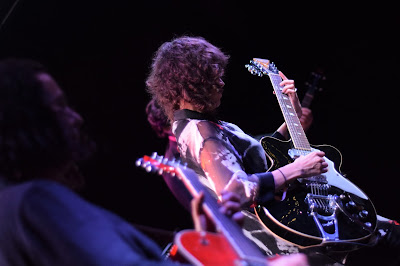 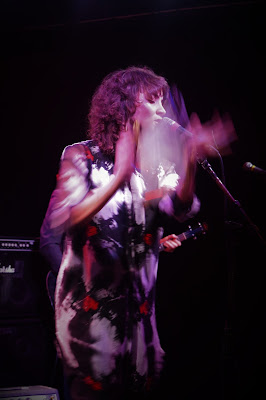 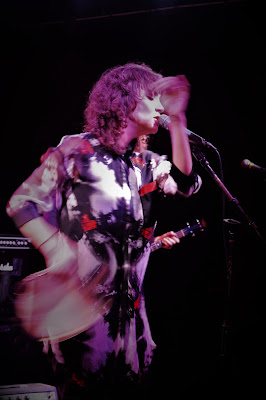 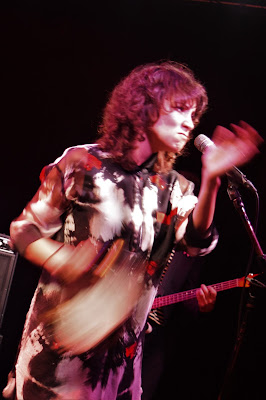 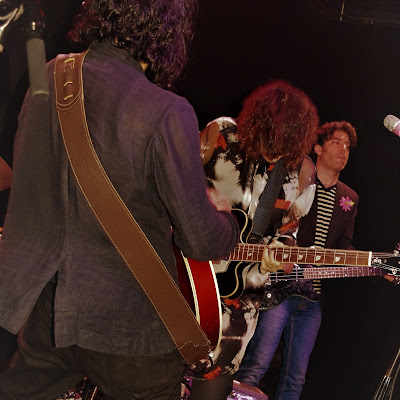 Finally, in what was possibly the sweetest moment I've ever seen onstage, Moreno brought her niece Alexia to the stage... for her United States singing debut!  They sang Fronteras, another cut from Ilusión. 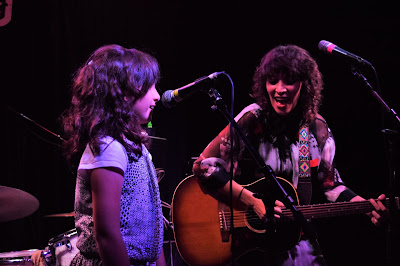 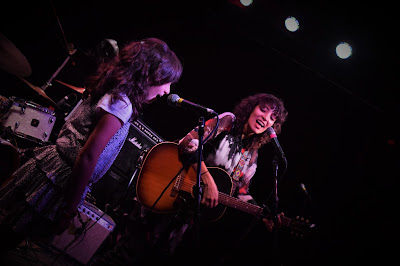 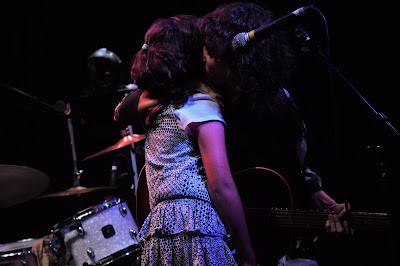 Here’s a video of Garza performing Slave, from This Euphoria; and, if it sounds familiar to Ethan Hawke fans, from the film Great Expectations. J
And here’s the title cut from Moreno’s new album, accompanied by Garza…