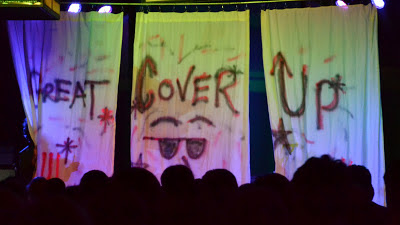 I couldn't make the first 2 nights of this year's Great Cover Up at Kings.  That's too bad, because I apparently missed Iggy (Cosky) doing Iggy (Pop), Janice Joplin, and E. L. muthafuggin' O!  Damn!  That must've been great.  Video, anyone?

But Night 3 was pretty impressive as it was.  Luckily, I didn't show up 10 minutes later, or I would have totally missed Joy Division.  Sam Logan, Nathan Price (Lilac Shadows, etc...), and Reed Benjamin (Jenny Besetzt) had us momentarily transported back to the Factory in 1979 Manchester.  I caught fairly authentic versions of Transmission and Love Will Tear Us Apart.  Sam did his best detached Ian Curtis onstage... 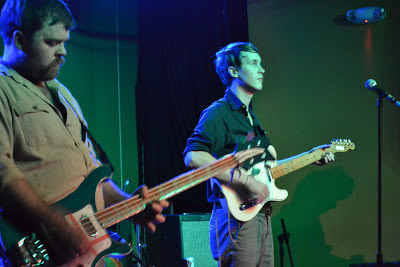 Jumping up a few years, Thom Yorke & Co. took the stage as Radiohead played... well, I don't listen much to Radiohead (although I'm told I'm supposed to), so I don't really know what they played.   Actually, Ari Picker (Lost in the Trees) and Alex Maiolo (Fan Modine) made me think "maybe I AM supposed to listen to Radiohead!" 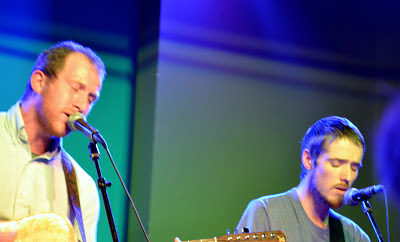 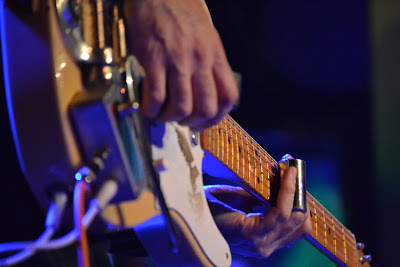 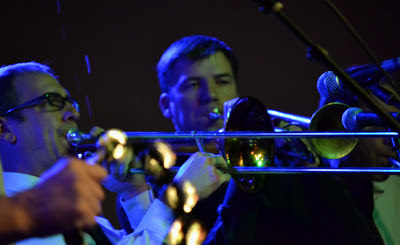 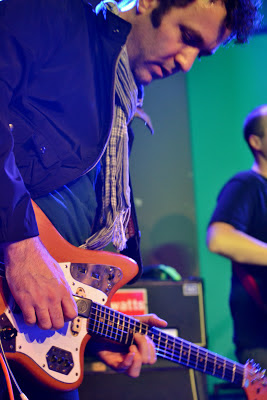 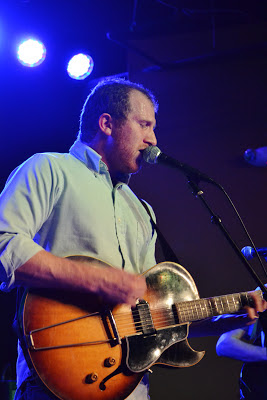 Then the roof blew off the joint.  It was an old-fashioned rhythm and blues revue, featuring the Queen of Soul herself, Aretha Franklin!!  Well, Reese McHenry (ex-of she and the Dirty Little Heaters).  Reese did a pretty good approximation, which is saying a lot.  She also had a BIG band of 10 backing her up!  Killer keyboards (that guy was wailing), backup singers, horns, the works.  R.E.S..P.E.C.T., You Make Me Feel..., Think, etc.  Reese was the best moment of a great show I saw a few months back when she got up and sang the opening number for Spider Bags.  I had never seen Dirty Little Heaters, but I wondered what I would hear again from her and when.  This was exactly the type of thing I was hoping for. 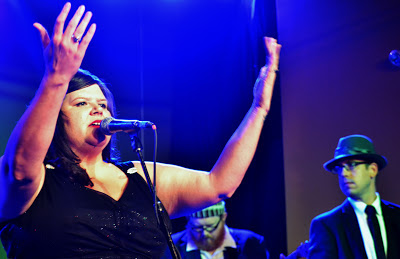 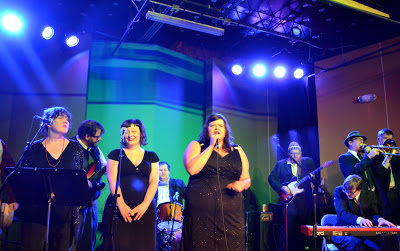 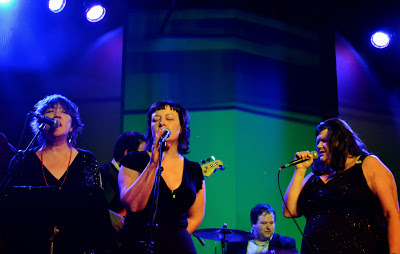 Then the Yeah Yeah Yeahs took the stage, featuring two members of Cellar Seas and Zeke Krautwurst from T0W3RS.  Chelley Godwin WAS Karen O!  I mean, you tell me... 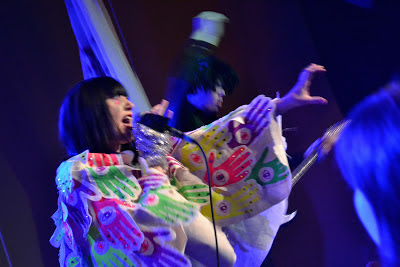 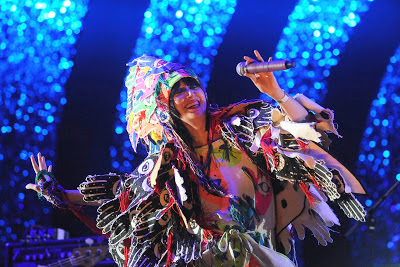 Though she only sings backup with Seas, she owned the stage here. This was also one tight band, if only for a one-off gig, and she and the guitar player made for a helluva dynamic pair.  It was stripped down and spare, but loud and garage-y in that sweetly dangerous way the Yeah Yeah Yeahs are.  I don't really remember the set list... I think they did Maps? 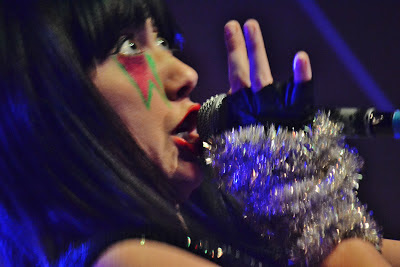 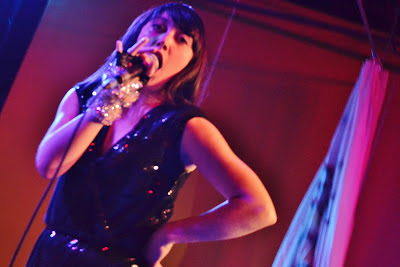 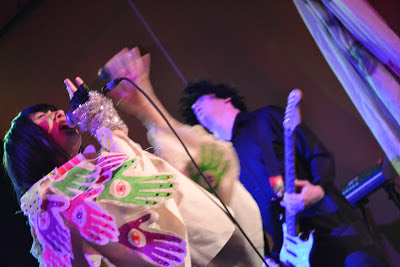 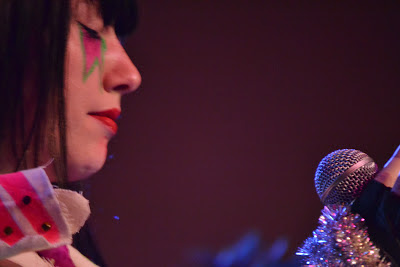 Speaking of garage, the Sonics followed.  I'd heard of them.  But Ian told me they invented garage.  And he was probably way influenced by them.  You know....  back in Manchester...  in the '70s..  when he was alive.  Anyway, this band was made up of The Infamous Sugar and members of Savage Knights and Black Zinfandel.  "Suge" preached over the keyboards and the crowd, while the rest of the band had that '60s proto-grunge thing going full force. 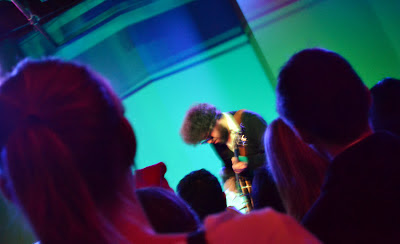 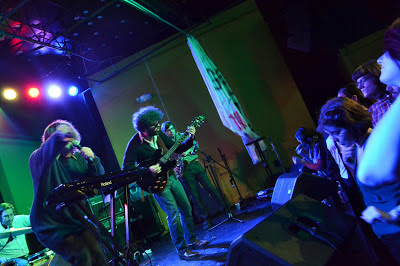 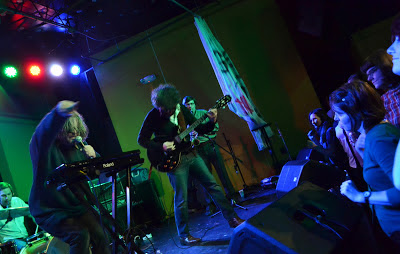 Closing the night, Swedish death metal progenitors At the Gates performed most of one of their albums (Slaughter of the Soul?  Sorry, not a metal guy). This incarnation of ATG was composed of members of locals Morose Vitality, and they were pretty tight and intense. 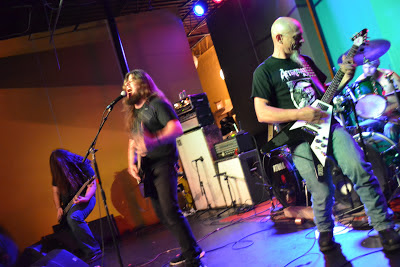 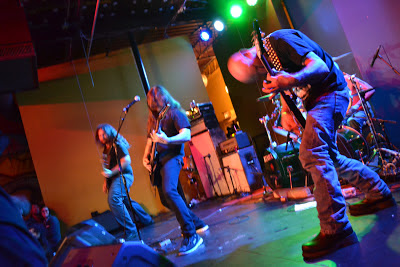 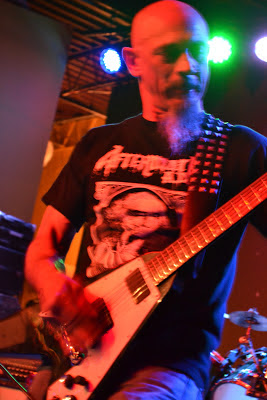 A perfect closer to a diverse evening's music.  What I can't figure out is just how Kings gets all these famous (sometimes dead) acts to play such a small room.
Posted by Brother John on 12/19/2012 No comments: