One of my favorite, and one of the most unique, Triangle bands is Organos, the brainchild of Durham's Maria Albani.  Lately, she's been keeping herself busy with the Potluck Foundation, See Gulls, and Schooner, not to mention rescuing dogs from Mexico (oh and I'm sure a job or something).  But Organos is her baby, her musical voice.

I rarely take so many videos of a band.  But the desire for such was expressed, and Organos' sound lends itself well to the questionable sound recording of my Nikon (i.e., not so much loud guitar, feedback and distortion).  Plus, who knows when they'll play again?!  (a little bird tells me Nightlight in July)

So here's 5 songs from Organos, recorded at the Anti-HB2 Fundraiser at Kings.  It was put on by the band Make, who were also great... and don't get me started about In the Year of the Pig, whom I had stupidly never seen!  I took a vid of them as well, but I'm not sure yet how it came out (I'll post if it's decent).

Besides just raising awareness to fight HB2 and discrimination in general, the show was a fundraiser for Southerners on New Ground.  Check out the link to learn more about the cause.
Posted by Brother John on 6/14/2016 1 comment: 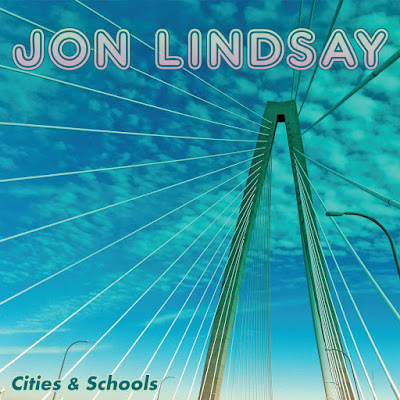 The first cut of Jon Lindsay’s Cities and Schools, All Them Houses, pops open like tray of Jiffy Pop.  You can immediately hear two things:  there’s a definite ‘80s retro vibe, and Lindsay is a master of melodies.

But his ‘80s touchstones are more aligned with pop-wave of bands like Split Enz, Squeeze, and XTC than the usual darker, punky influences kids wear on their sleeves these days.  There’s a middle ground between Bauhaus and Bananarama, you know.  Between The Killing Moon and Karma Chameleon.

But it’s not all oldschoolnewwave.  The album blends this synth-y vibe with a hefty dose of guitar crunch, really just coming off as power pop, not limited to any era.  See Lifer, When They Broke the World... well, pretty much all of it.

On Lifer, lyrics like “Your love is downtown! Downtown!” pair perfectly with such catchiness.  But a closer look belies the outward fluff; her “love” is her banking job, which has sucked her up to the exclusion of everything else.  Figures that Lindsay, maestro behind the overtly political NC Music Love Army and former Charlotte resident, would touch on the banking crisis... if only obliquely (and probably unintentionally).  But Cities and Schools never veers too far from the personal.  He complains on When They Broke the World not about the Great Recession, but that “they hurt my girl.”  One wonders if All Them Houses is influenced by the burst of the housing bubble, but it sounds more about that of a relationship.  Hugo gets more specifically personal, relating his life-changing childhood experience surviving that 1989 monster hurricane.  A little PTSD (or PHSD) therapy.  As a Gulf Coast refugee, I can definitely understand that.

But still, the sometimes dark personal musings are always delivered in a jumpy tone.  No.  Perhaps it’s more one of restlessness, a little anxiousness, running throughout.

Funky organ and syncopations provide welcome mid-album detours on A Couple More Boats and Jonny Outta Control.  Lindsay reserves his most bitter words for the record industry, on In Breach.  Biting lyrics abound:  “What’s it like not to have any friends that you don’t have to buy?”, “My greatest treasure is time, which you have frittered away”, “If you were covered in fire, I wouldn’t spit in your face.”  Ouch!

But when The Man tells him “Just give us every single thing we’re looking for” I’m thinking “What else COULD they be looking for?!?”  The songs on Cities and Schools hike a trail of ultra-catchy, melodic pop that’s hard to resist.  And one seldom traveled by other NC bands.  Maybe it’s considered too precious and precocious by today’s uber-jaded hipsters… I don’t know.  I DO know that after listening to Cities... a couple of times, the songs keep echoing in my head.  Isn’t that what you want?

Jon Lindsay and his band play a record release show for Cities and Schools at Raleigh’s Pour House on Saturday, June 11th, with The Old Ceremony opening.
Posted by Brother John on 6/09/2016 No comments: