The Kneads – Letting You Let Me Down (PotLuck Foundation/Records) 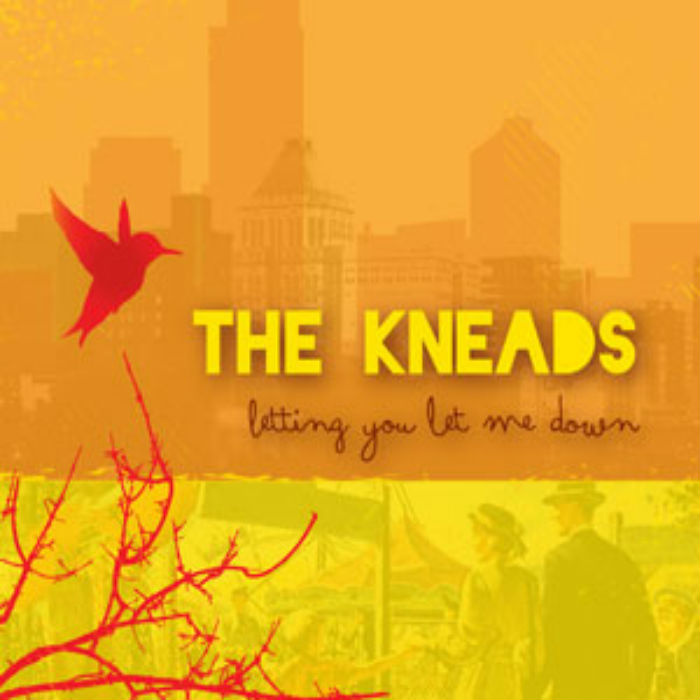 Greensboro’s The Kneads are a band haunted by ghosts of the past… specifically early to mid ‘90s indie ghosts.  And that’s fine by me, because for all that era’s resurgence in popularity, I’ve heard few new bands actually continuing to mine the vein.

Which is not to say they’re derivative.  It might sound like they wear their influences on their sleeves.  People (even their press kit) cite influences like local heroes Superchunk, as well as DC post-hardcore band Fugazi.  I also hear Midwestern acts like Poster Children and Braid, and another great DC band, Jawbox.   But these can’t rightfully be called influences.  Members of The Kneads were playing in indie bands of some note back then (going back to The Raymond Brake), so they were really more contemporaries.  Now, with The Kneads, they’re just continuing to do what they’ve always done.

The thing about “indie guitar rock” is, it’s a vein with plenty more left to tap.  When done well (and The Kneads do it well), it’s not just thrashing of guitars with a melody buried in the din.  Within the simple guitar-bass-drums dynamic (here, sometimes guitar-guitar-drums), there’s ample opportunity for the unexpected:  complex instrumental and vocal interplay, surprising chord and tempo changes, etc.  And the unexpected, for me, is what makes music worth listening to. 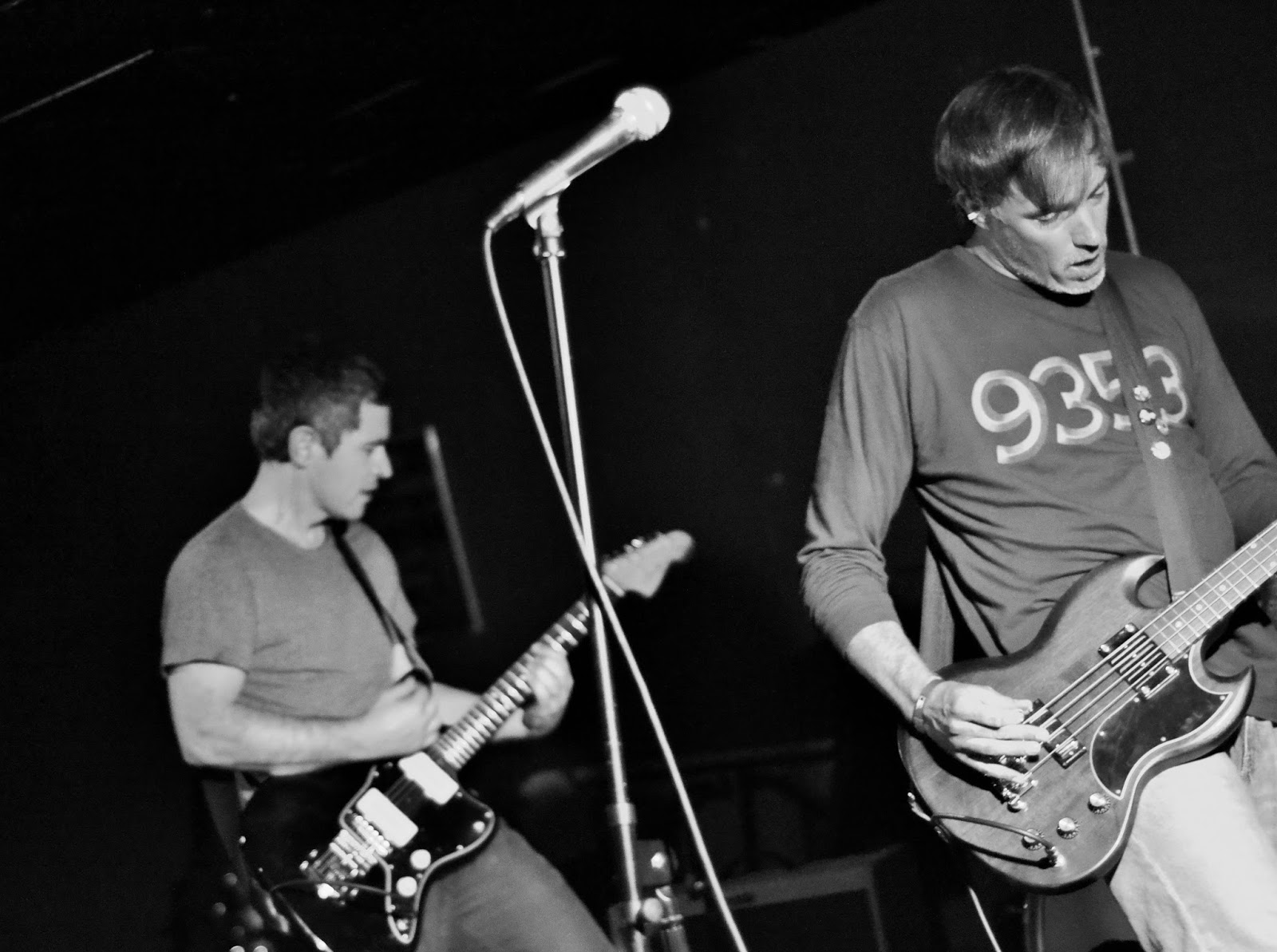 Their debut CD, Letting You Let Me Down (great title, btw), on Durham’s PotLuck, is full of dense, dissonant guitars, with unanticipated little twists and turns embedded throughout.  The first cut, North and South of Temperament, is a perfect example.  The bridge slows and slips you into a completely different melody -- almost a different song entirely -- before resuming the driving hook that opened the song.  Call-and-response lyrics here, and in other tunes like Persistence Changes Everything, add yet another layer.  I do hear Fugazi in Persistence and a few other places, but the similarity is more vocal (courtesy bassist/guitarist Michael Joncas) than musical.   No, check that.  Maybe also in the jazz-ish complexity of the instrumentation.  While there are more straightforward head-bobbers like Jaded and Rejuvenated and Toto Recall (and more great titles), they always have a more-than-par-for-the-course intricacy, often via syncopated rhythms from drummer Joe Garrigan.

Toto Recall and Microcelebrity visit the music scenes of yesterday and today, respectively.  The former flashes back to the summer of ’95, post-adolescence, and self-doubt, twisting Tom Petty’s discontented lyric into the more open-ended, even optimistic (?), “start draggin’ my heart around”.  It then pleasantly ventures into a little psychedelic spacey-ness near the end.  Microcelebrity bemoans the current crop of “pseudo-indierock” bands trying to claim the overused mantle.  With indie having long-since become a buzz-word, guitarist Joel Darden laments singers that have “no virtues to extoll / just cheap-ass hood-rat dime-store rock’n’roll” and have “read the Pitchfork poll”.  Or… is he one of them?  Self-doubt, it seems, is always there.

At the end of Microcelebrity, Interpol-esque guitars devolve into still more spacey sounds, before the space theme becomes lyrically overt in I Miss Your Underdog Days.  I must say this one had me flashing back to Poster Children’s Junior Citizen, with all the mission control terminology, though it’s more relationship than music metaphor (“Did you wake up in the thermosphere?  It don’t matter, get your ass back here!”).  Fistful of Contradictions brings it way down with an almost experimental number, answering-machine “vocals” struggling from underneath acoustic strumming and chiming electric.  Then the album returns to the rawk with its driving closer, the Fugazi-meets-Smashing Pumpkins Frames.

Of course, there’s yet another surprise at the end… and not just because it’s a hidden track (and, due to the chorus of “Not gonna let you let me down”, I assume the title track).  It veers WAY left into a twangy, reverb-laden, light-pop vibe, and it’s a wonderful way to (actually) close the album.  Don’t touch your dial until it ends!


Overall, Letting You Let Me Down is a nice bridge between hardcore & indie-rock, from a band clearly schooled in these genres, but smart enough to mix it up throughout to keep it interesting.
Posted by Brother John on 4/25/2015 No comments: 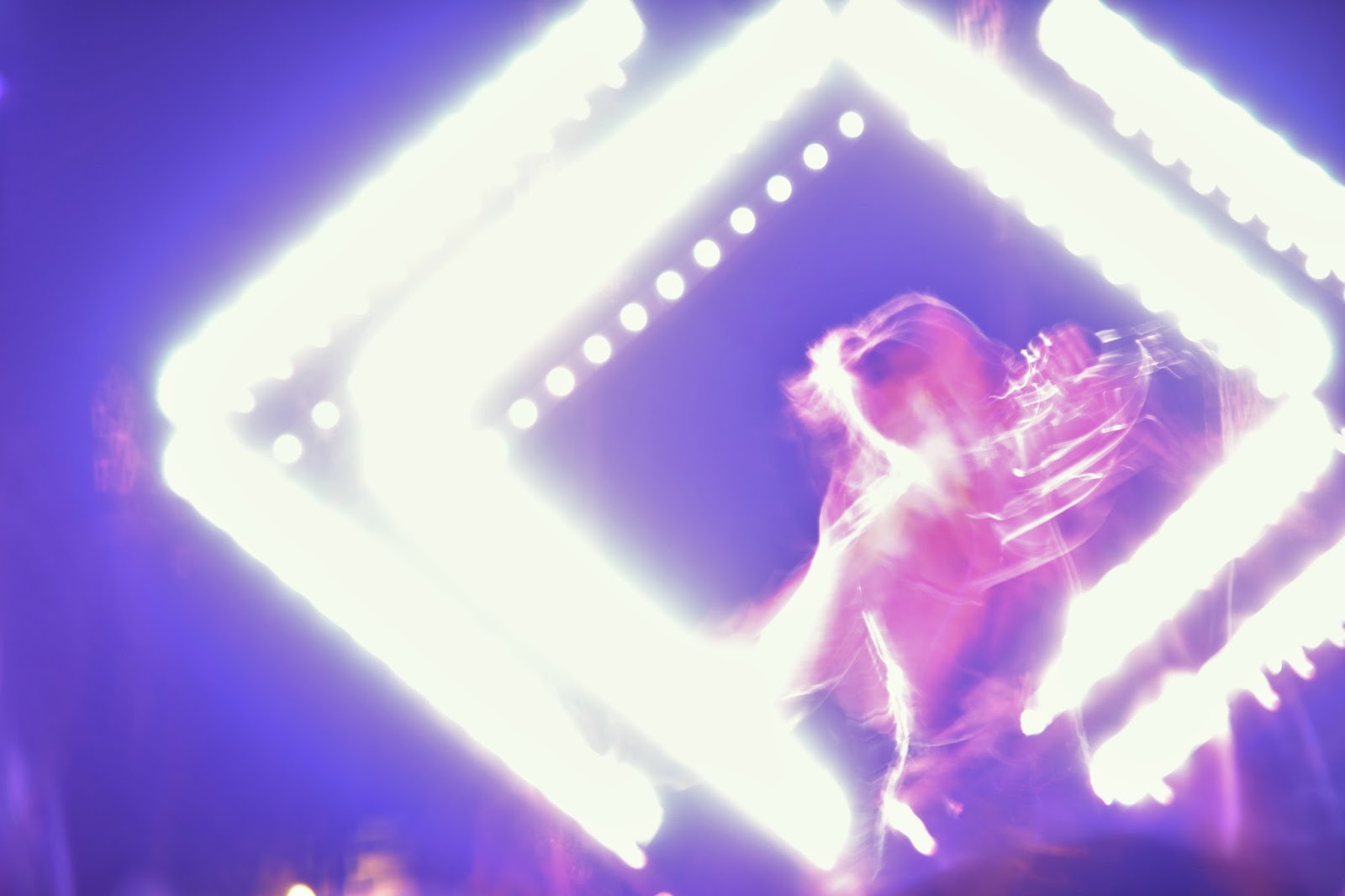 The first time I saw Sylvan Esso, all I knew about them was that they were an up-and-coming Durham duo with members of two bands I hadn't really listened to:  Amelia Meath from rootsy vocal trio Mountain Man, and Nick Sanborn from local favorites Megafaun (hell, I really just knew Sanborn as a sometime member of the Love Language from way back in 2011).  Dance not really being my thing, they were still fun when I saw them open for the Love Language many months ago.  This was just before they graduated from "up-and-coming local act" to "genuine international buzz band".  Despite being pre-album release and very few live shows in, they already had the audience eating out of their hands.  In that setting, though, I couldn't quite hear what has since become so appealing to me about this band.

But upon listening to their eponymous debut, Meath's liquid, layered vocals began to draw me in, begging to be drunk... to become drunken with them, to drown in them.  In songs like Hey Mami, H.S.K.T., and Play It Right, you can definitely hear a rootsiness.  This made sense since her previous band was one often compared to folkies the Roches, a similarity I (probably not coincidentally) noticed in her Sylvan vocals despite never having heard that earlier comparison.  But with Sylvan Esso, the pastoral is mixed with a siren-like worldliness more befitting a smoky cabaret or, yes, a dancefloor... but perhaps a dirt-strewn, moonlit dancefloor, as on this night. 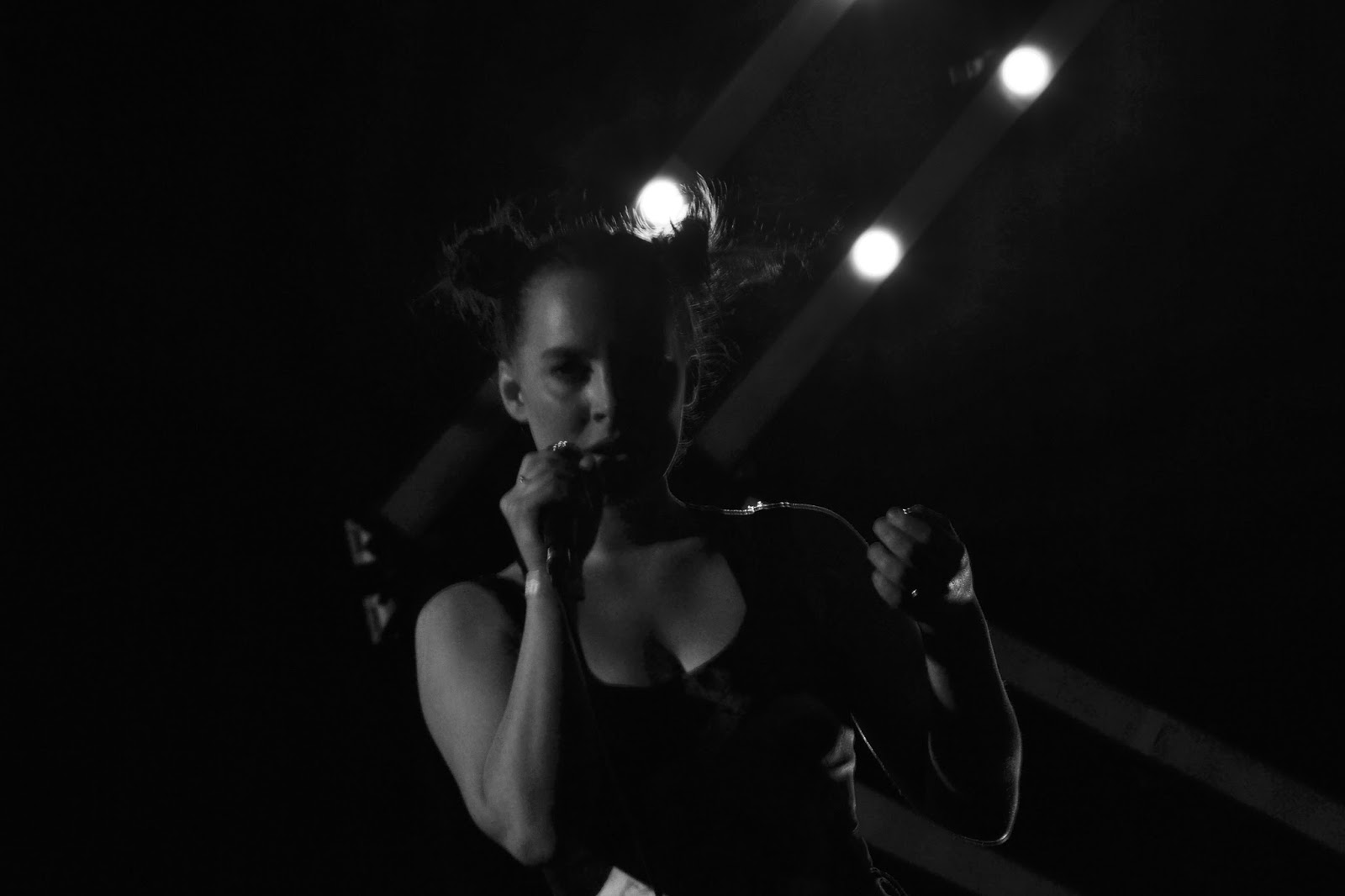 Not to ignore Sanborn's input.  He's the one doing the layering of her layered vocals (no trio to harmonize with here).  He's providing the rhythm, adding the accents, just making the damn thing whole.  Complex yet sparing beats perfectly complement the vocal melodies.  Truth be told, there are scores of stunningly beautiful vocalists out there.  Without Sanborn's skillz, Meath's excellent vocals (as talented as she is) might frankly get lost in the crowd.  But the chemistry between the two of them creates something much more exciting and relevant than just great singing. 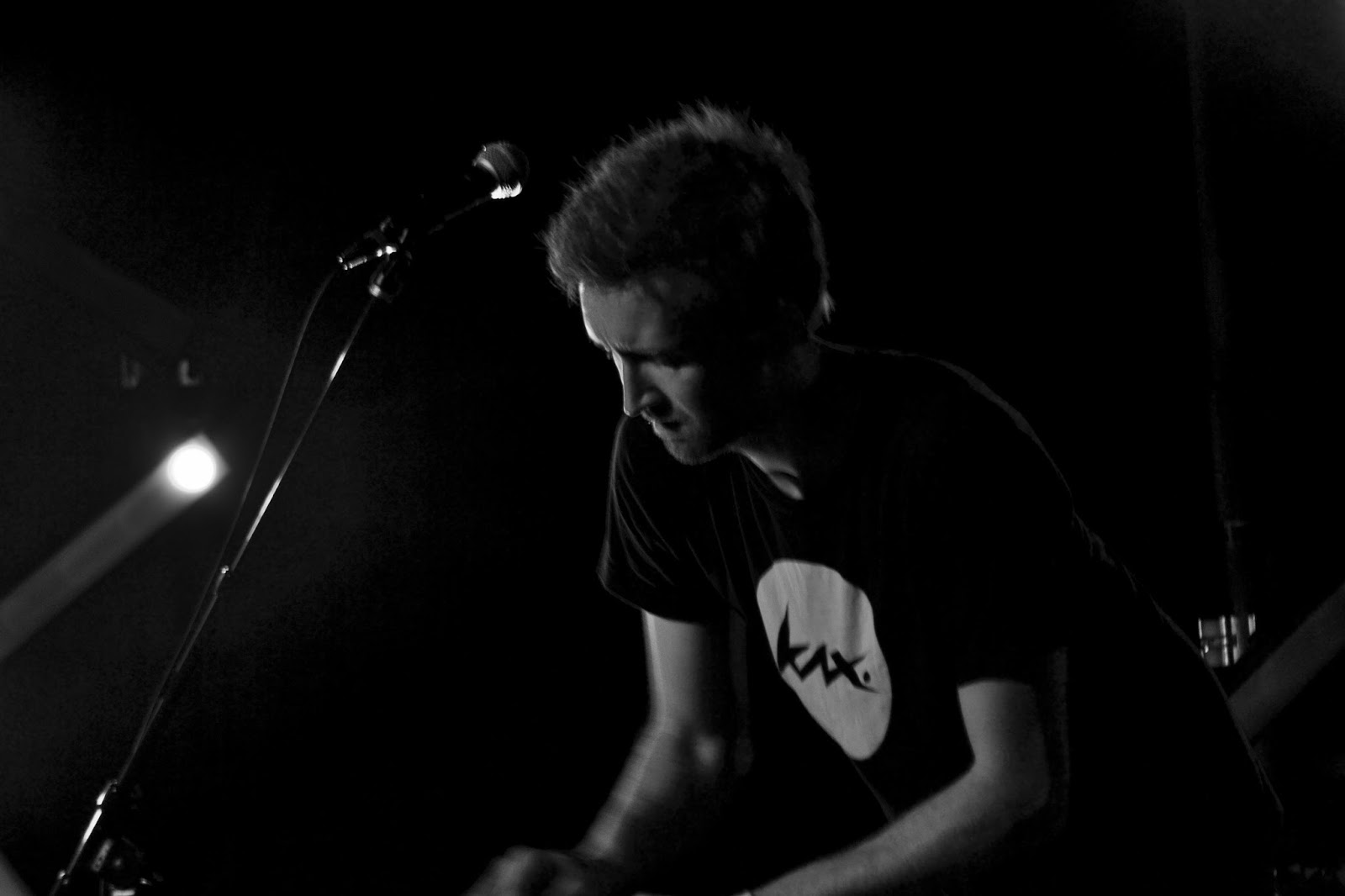 It is for me, however, that voice.  And, back to the setting, that voice could ask for no better space to fill than a grassy field in Carrboro on a stunning spring night.  Christ, the full moon was rising just as she crooned "The modern WOLF..." (the opener to the song Wolf).   It was all smoothly led into by the Rosebuds' Ivan Howard's solo set, and the singularly intense vocals of Jenn Wasner playing as her solo project Flock of Dimes.  This built to an eventual mellow-pagan dancehall vibe, ending with the encore of Come Down, the beautifully resonant closer from the album and perfect postscript for the night.

Carrboro Town Commons adds a great large outdoor venue to the Triangle scene, especially for nights like this one.  Here's hoping they use it more often (and provide more bathrooms, PLEASE!).  Both Wasner and Meath (no strangers to touring) said the crowd of around 4,000-5,000 was the largest they'd ever played before, and it's good to know we gave it to them.  The scene here can do that for more touring (and bigger local) bands. 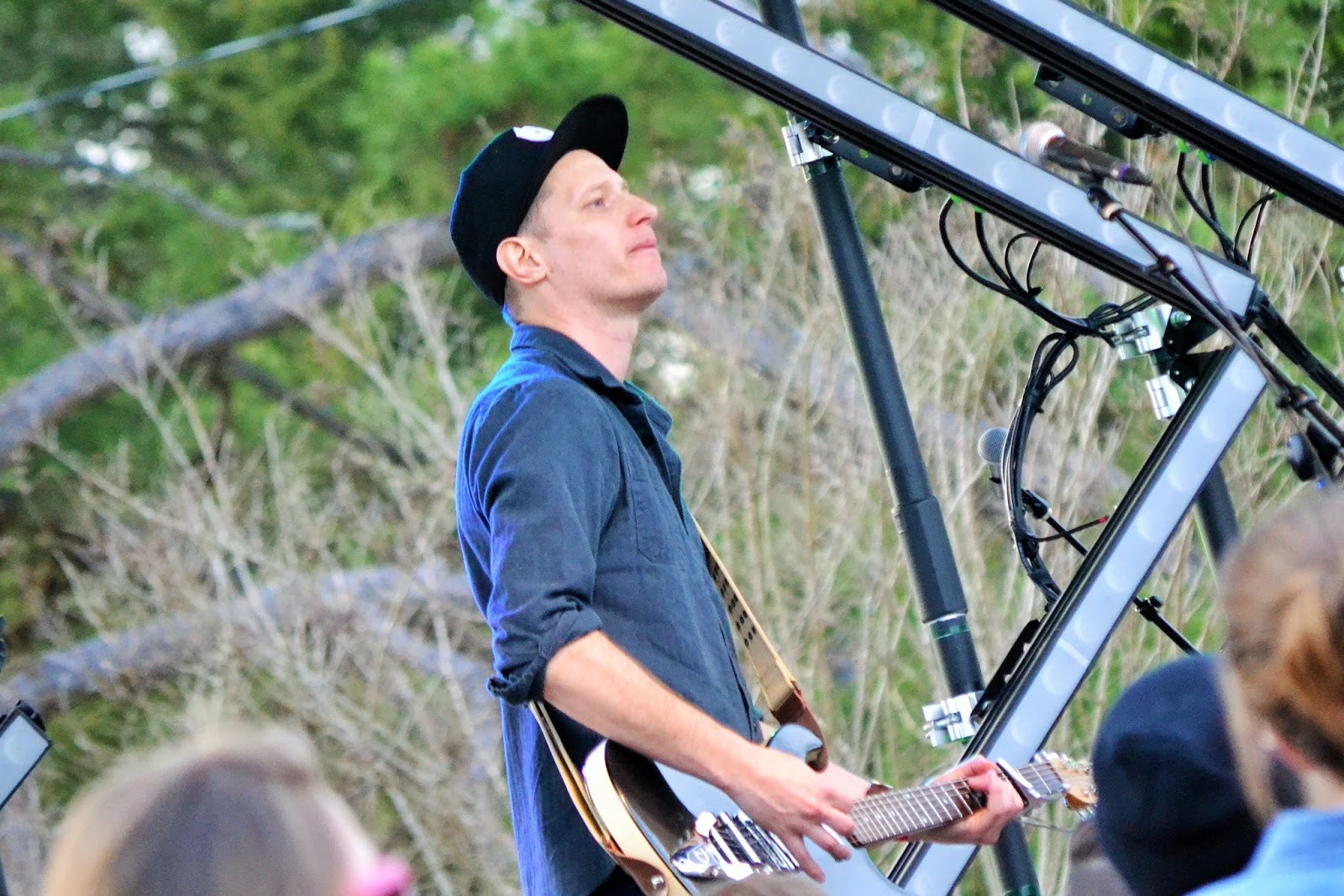 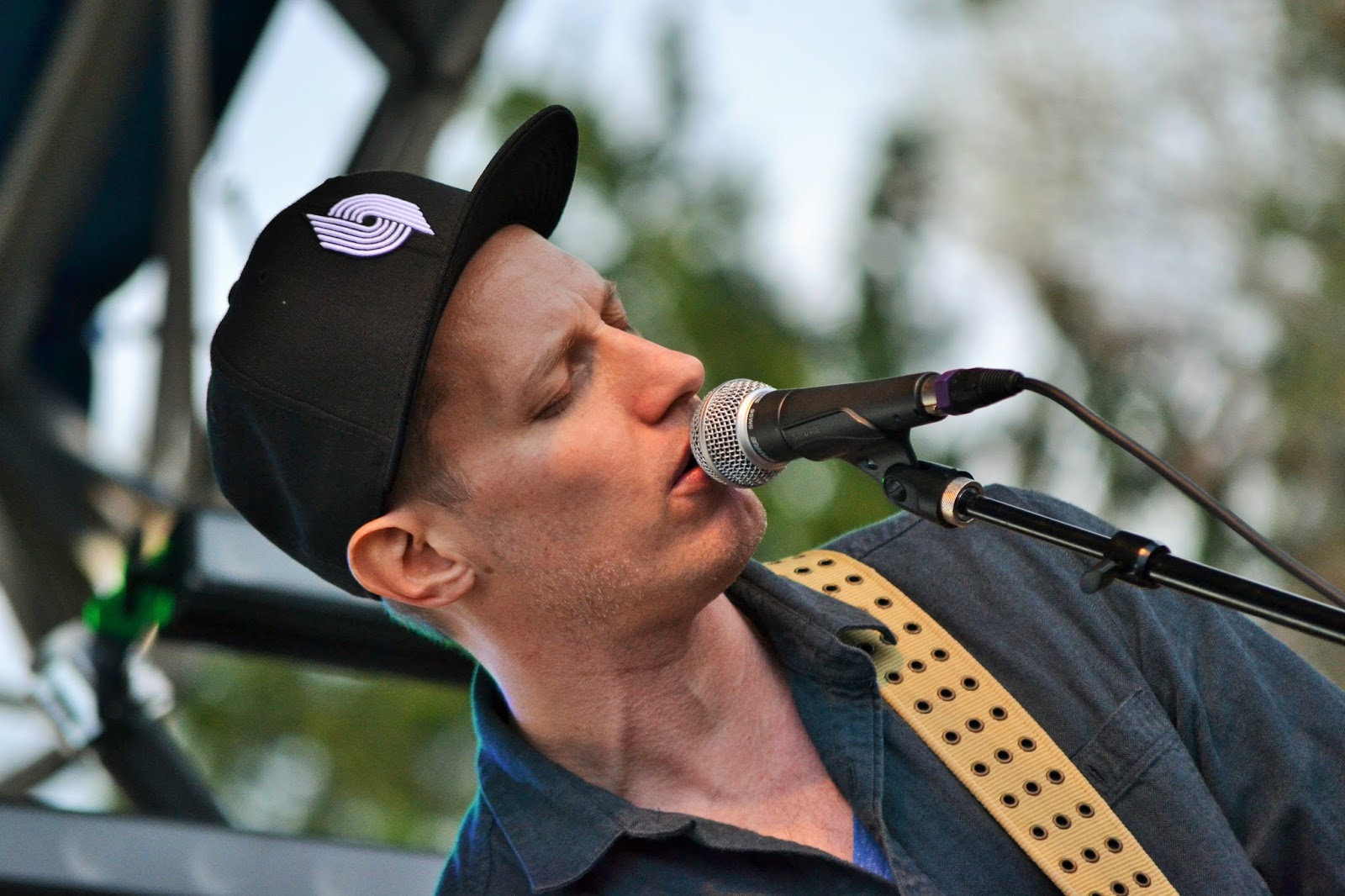 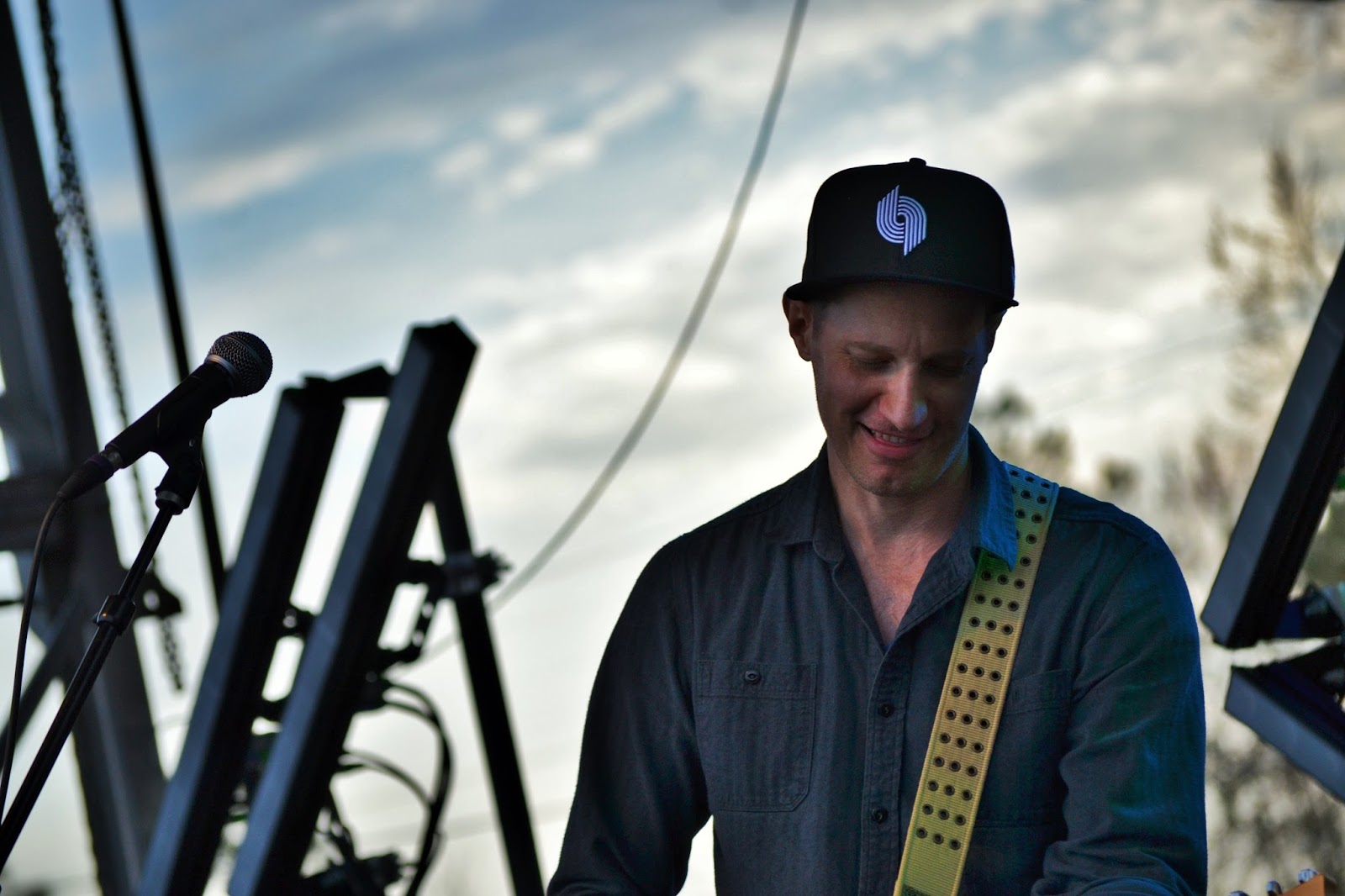 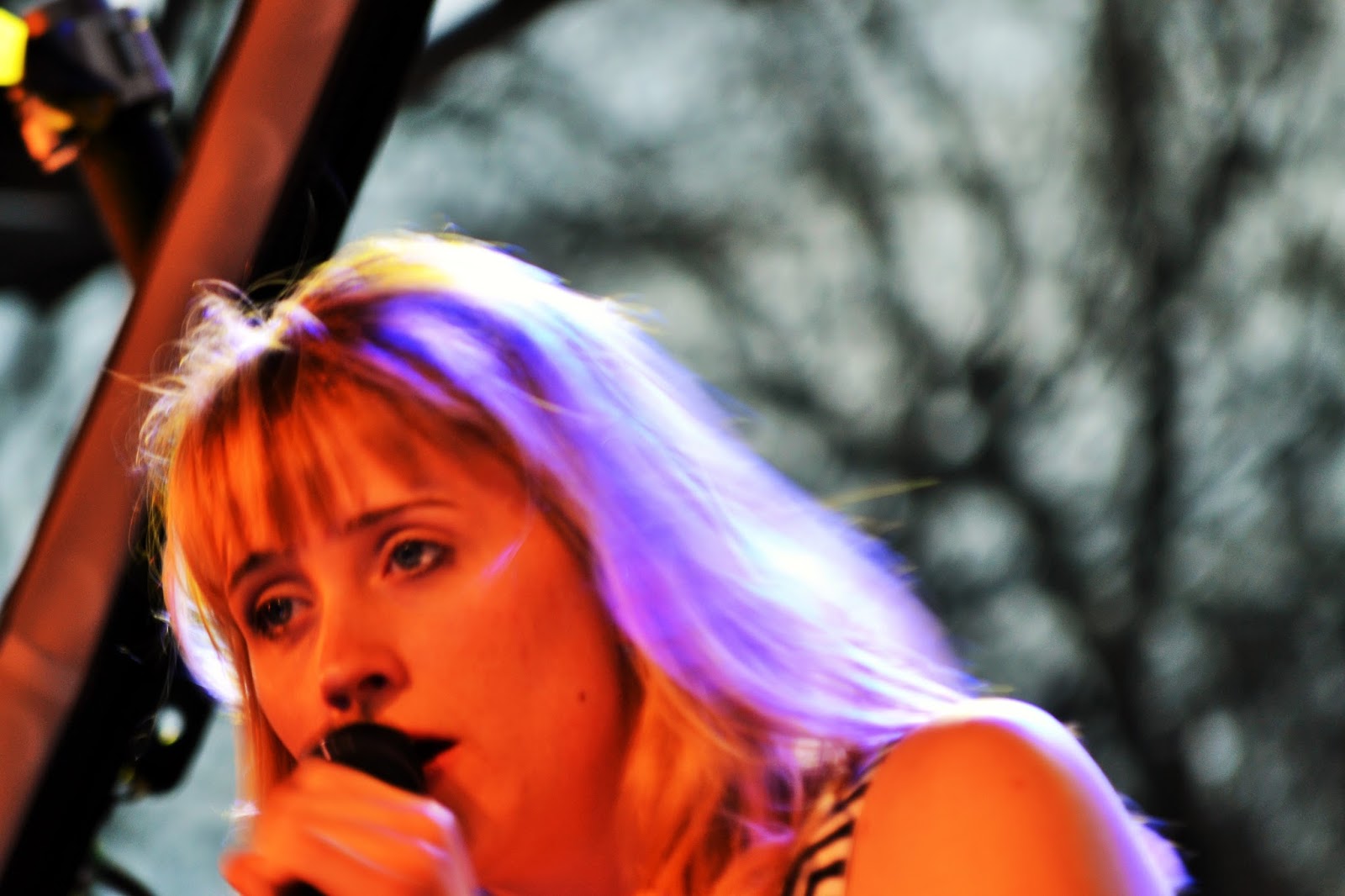 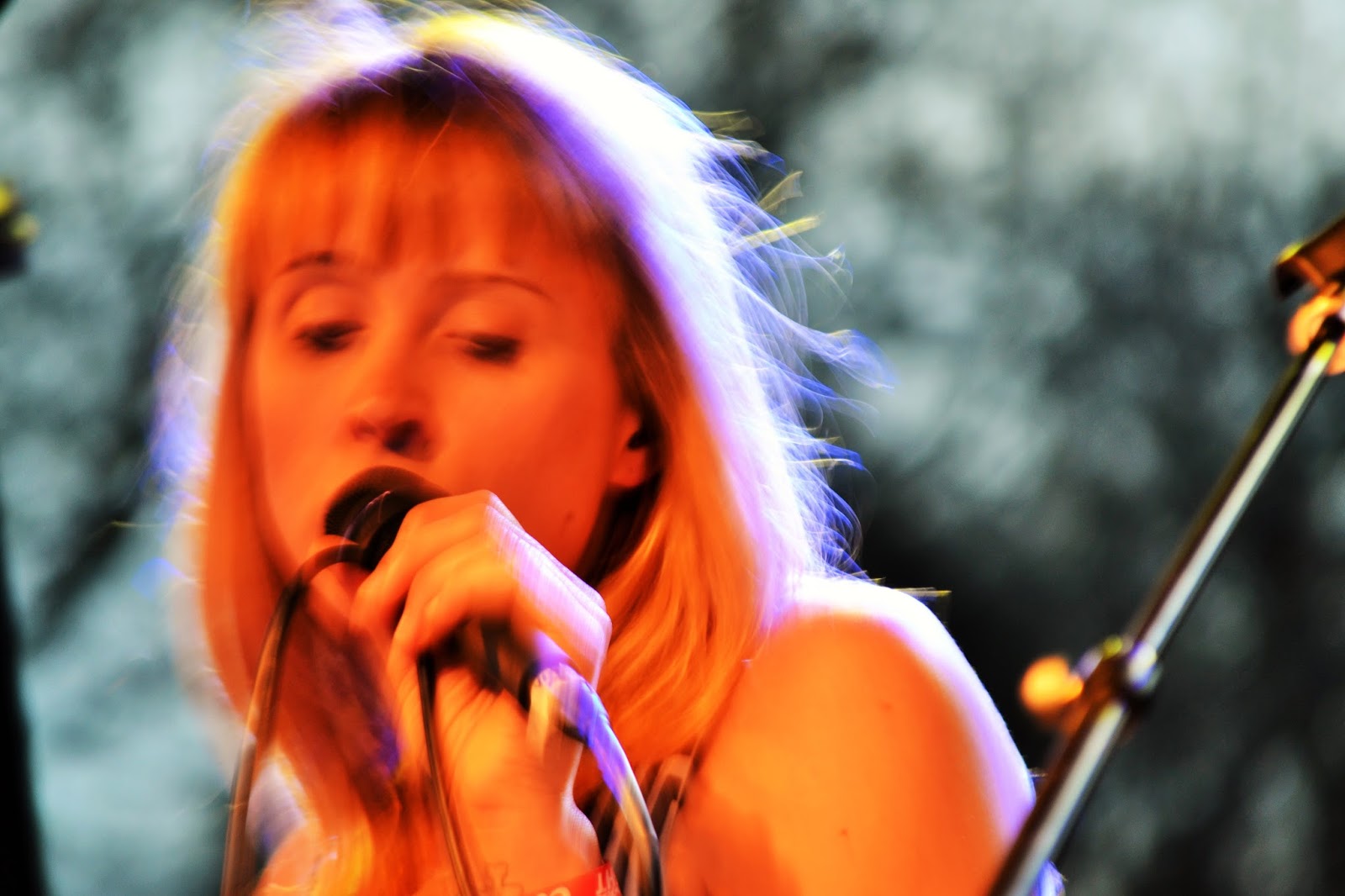 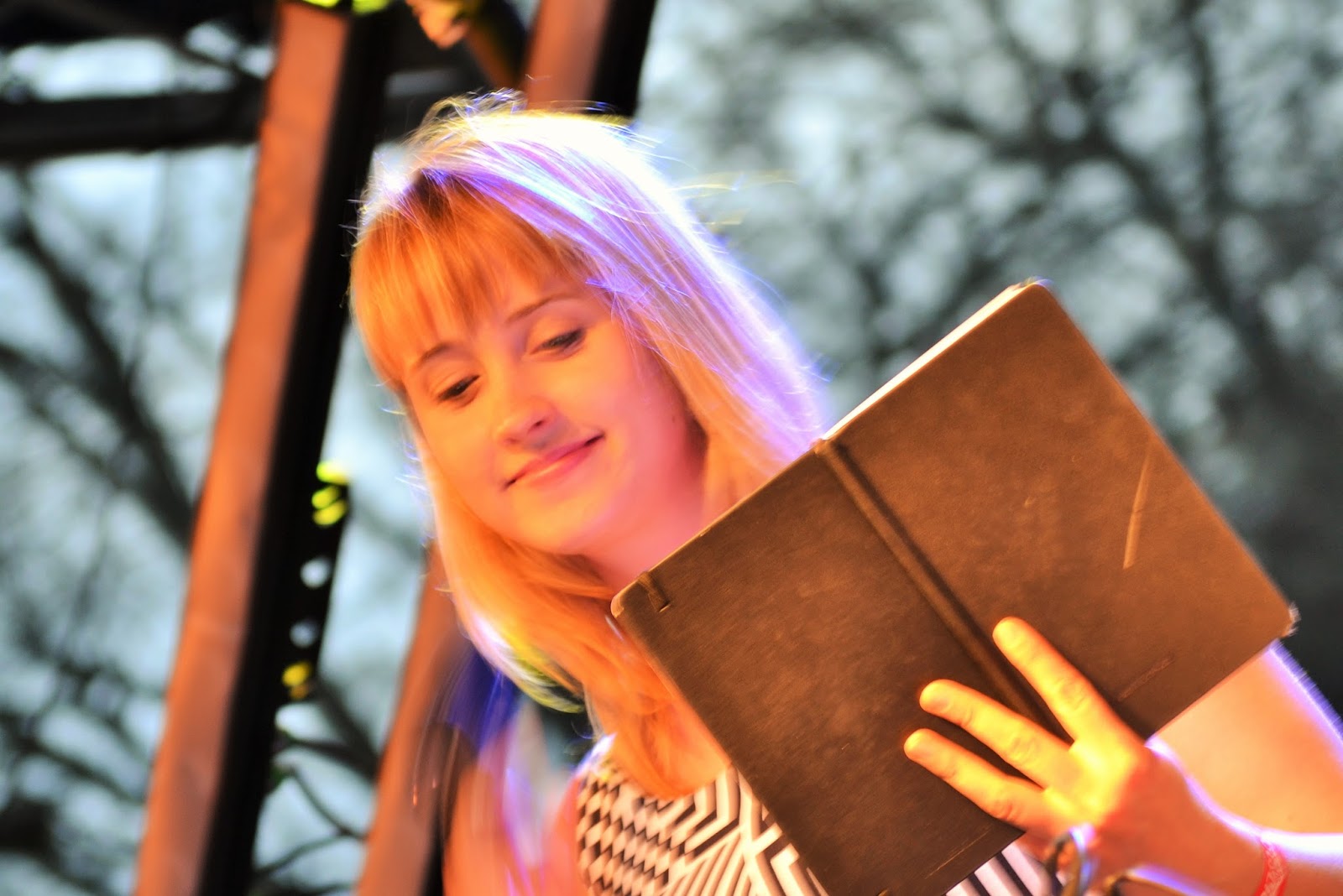 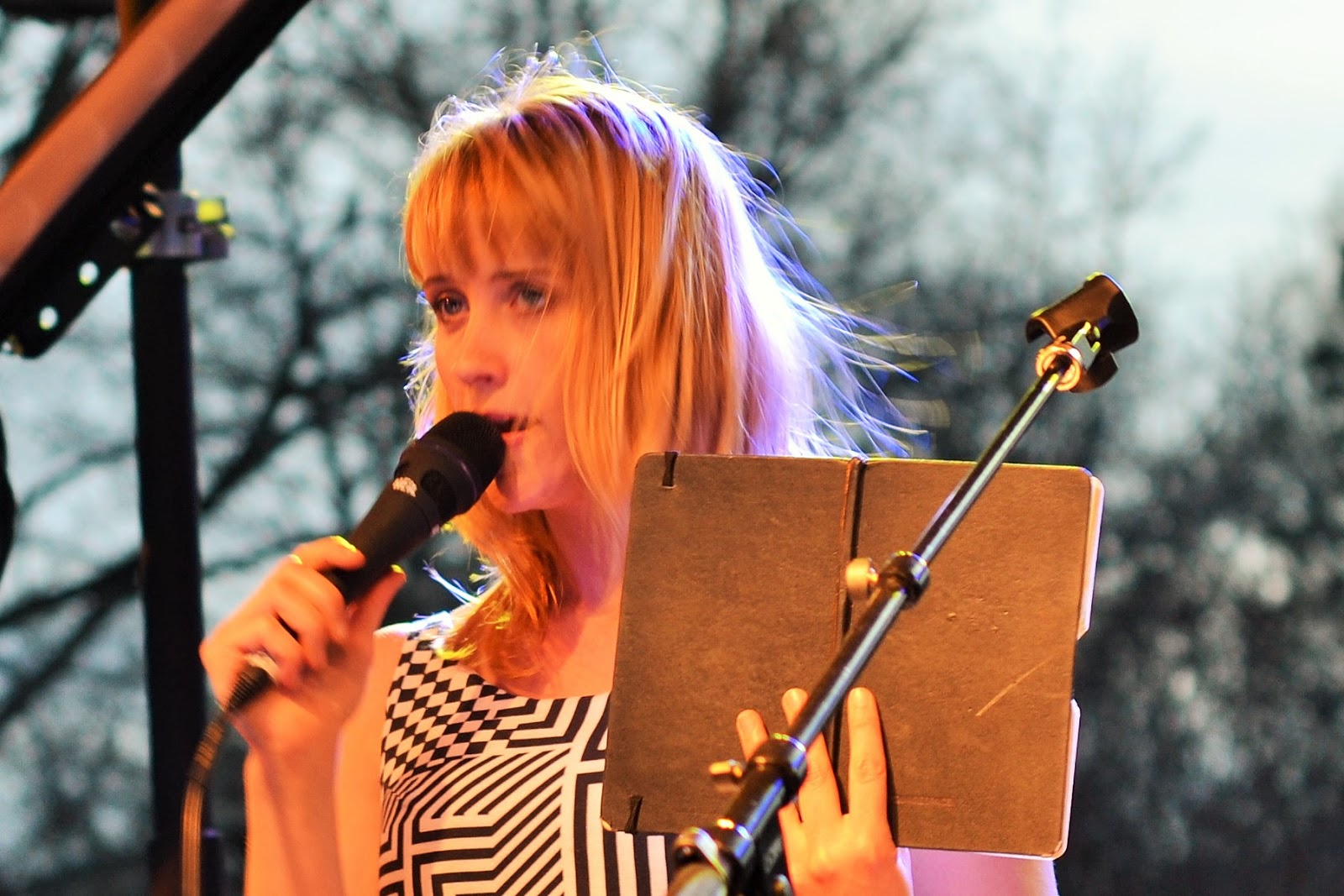 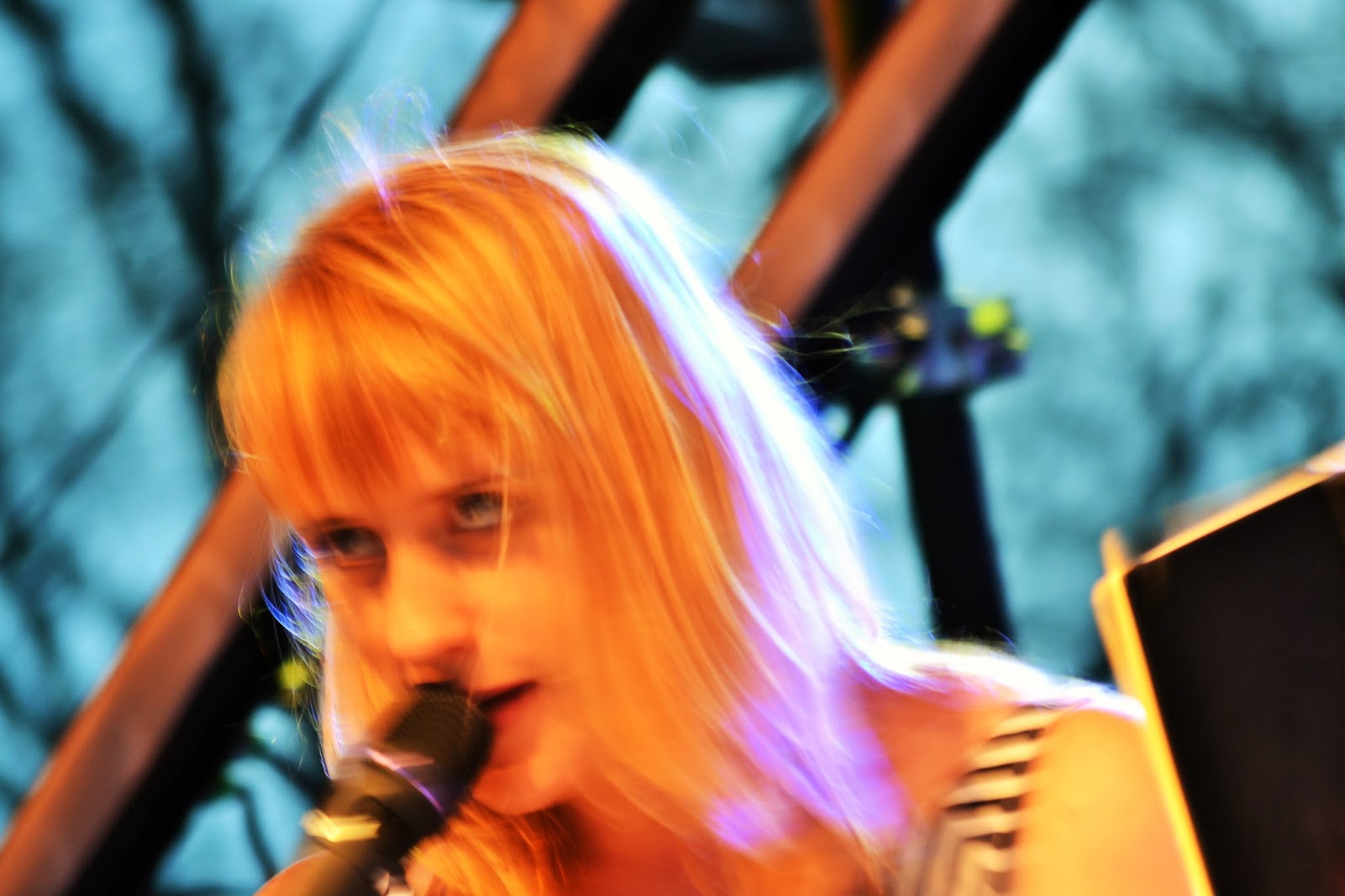 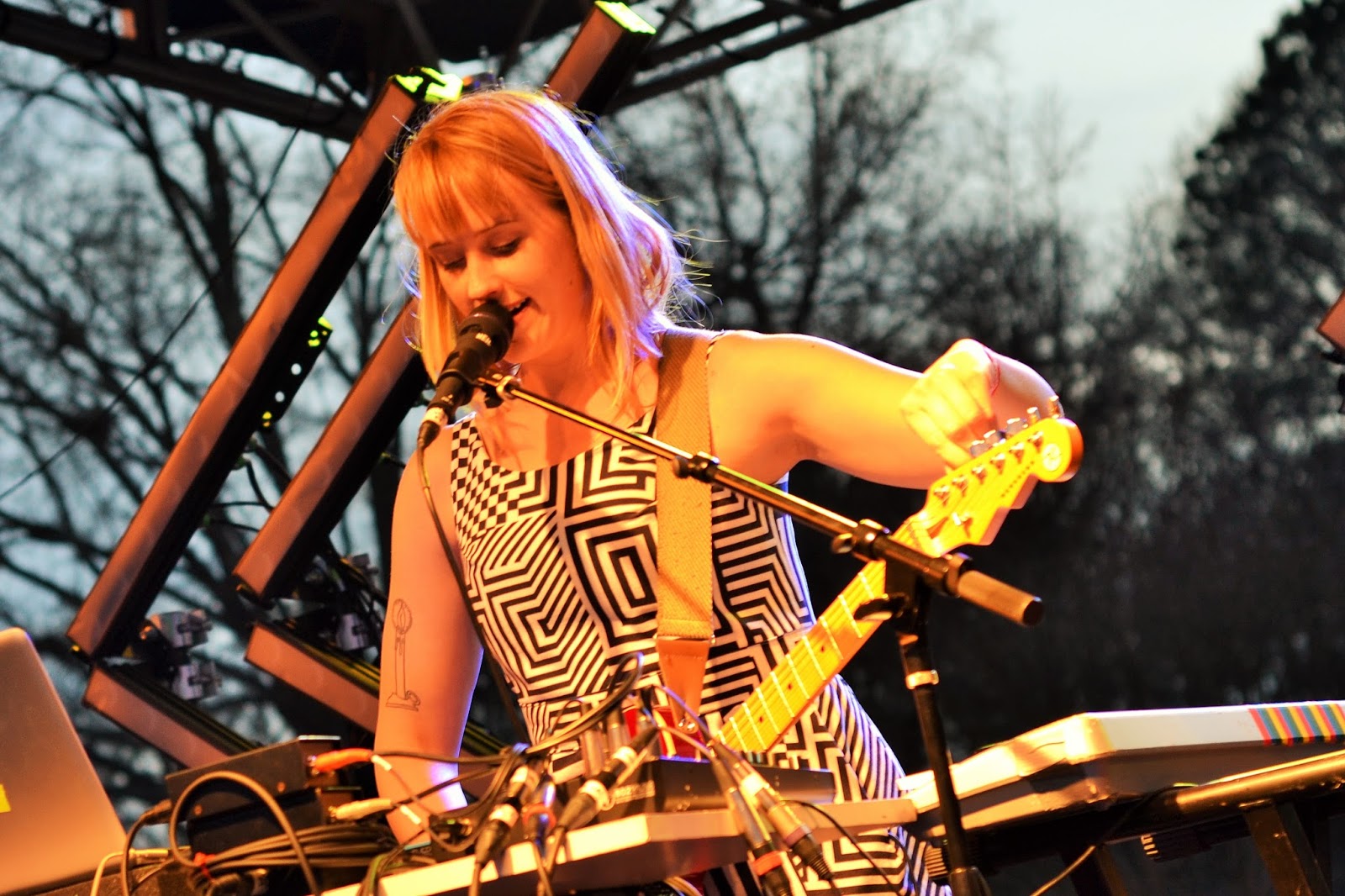 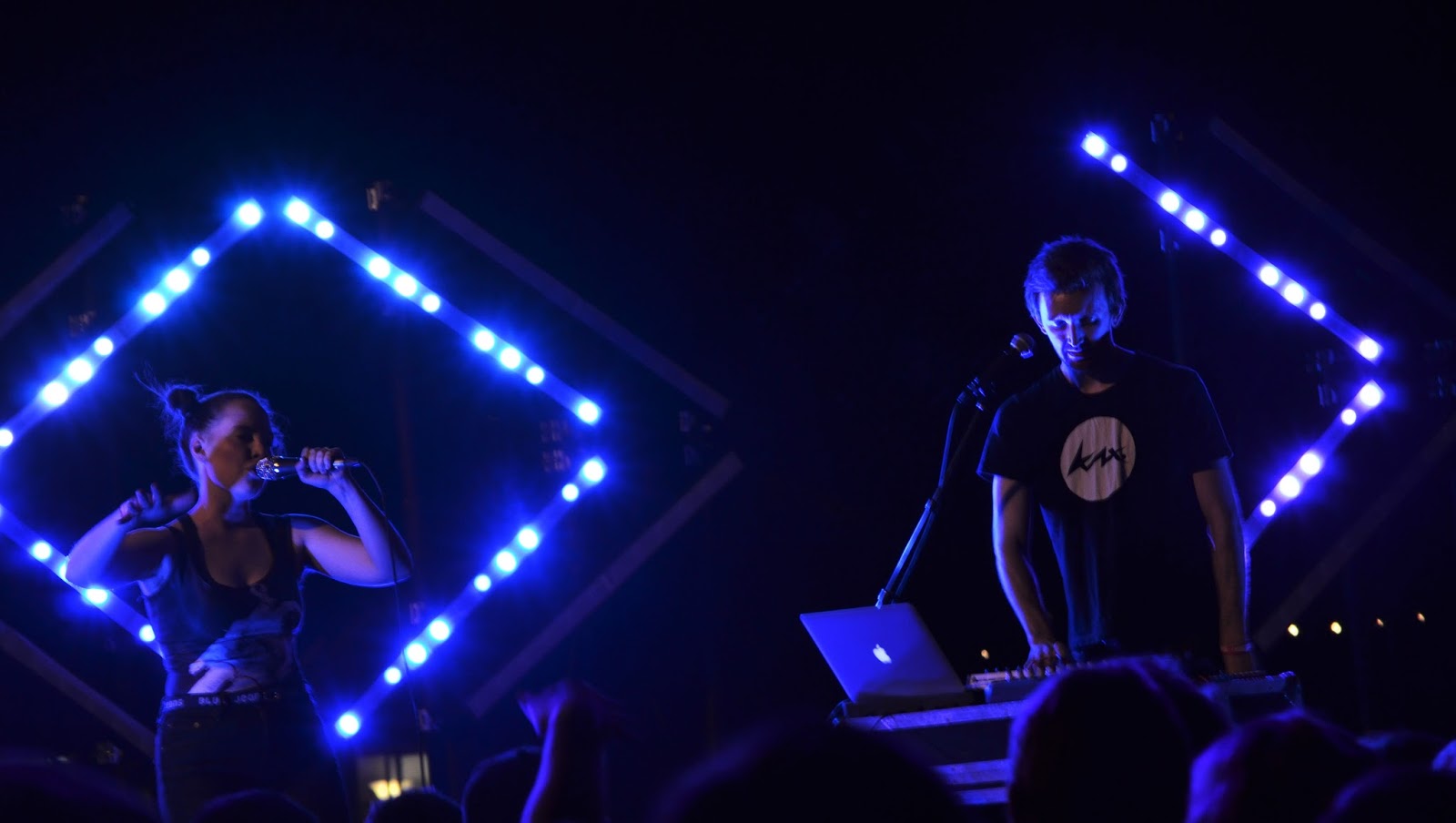 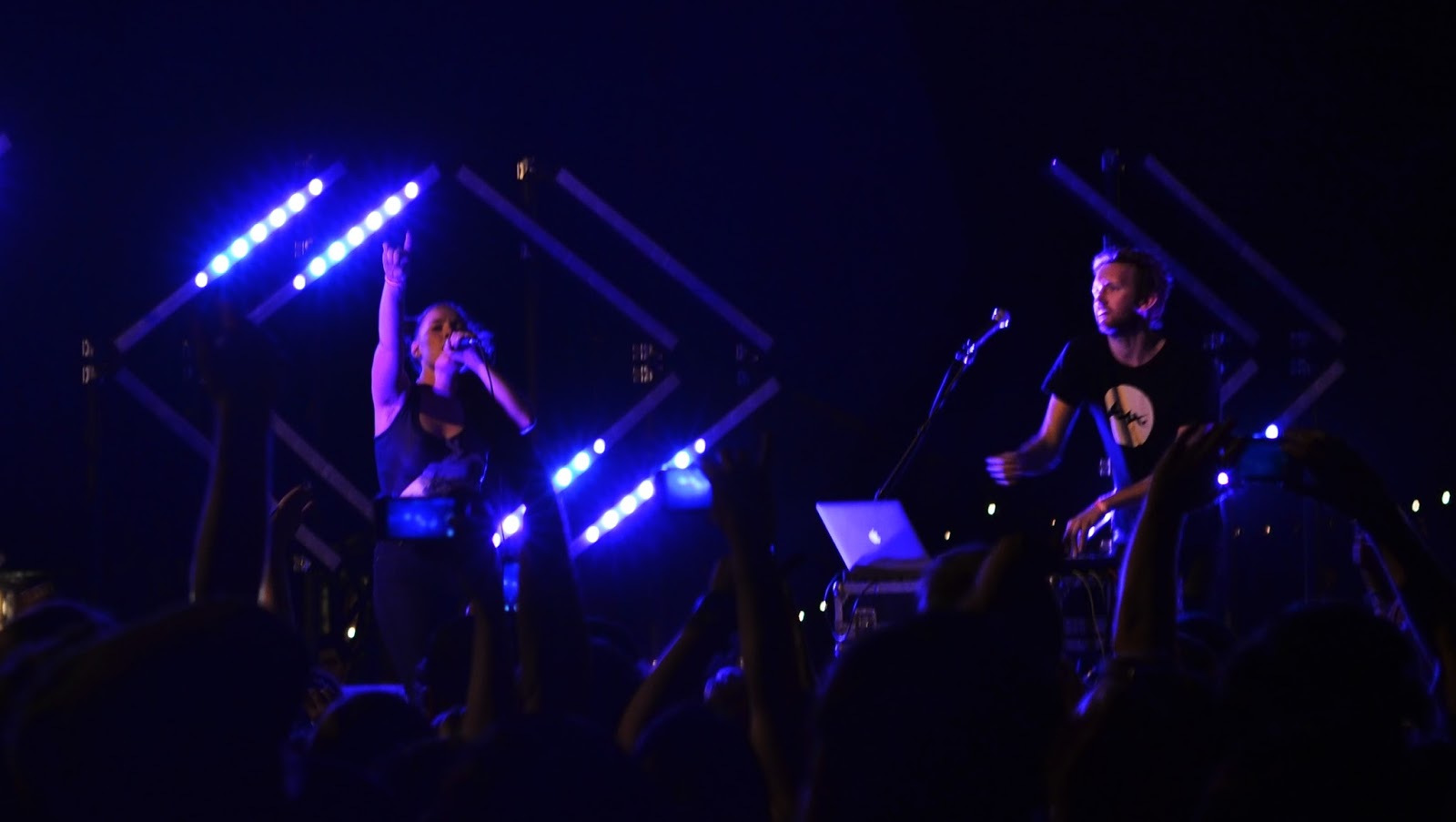 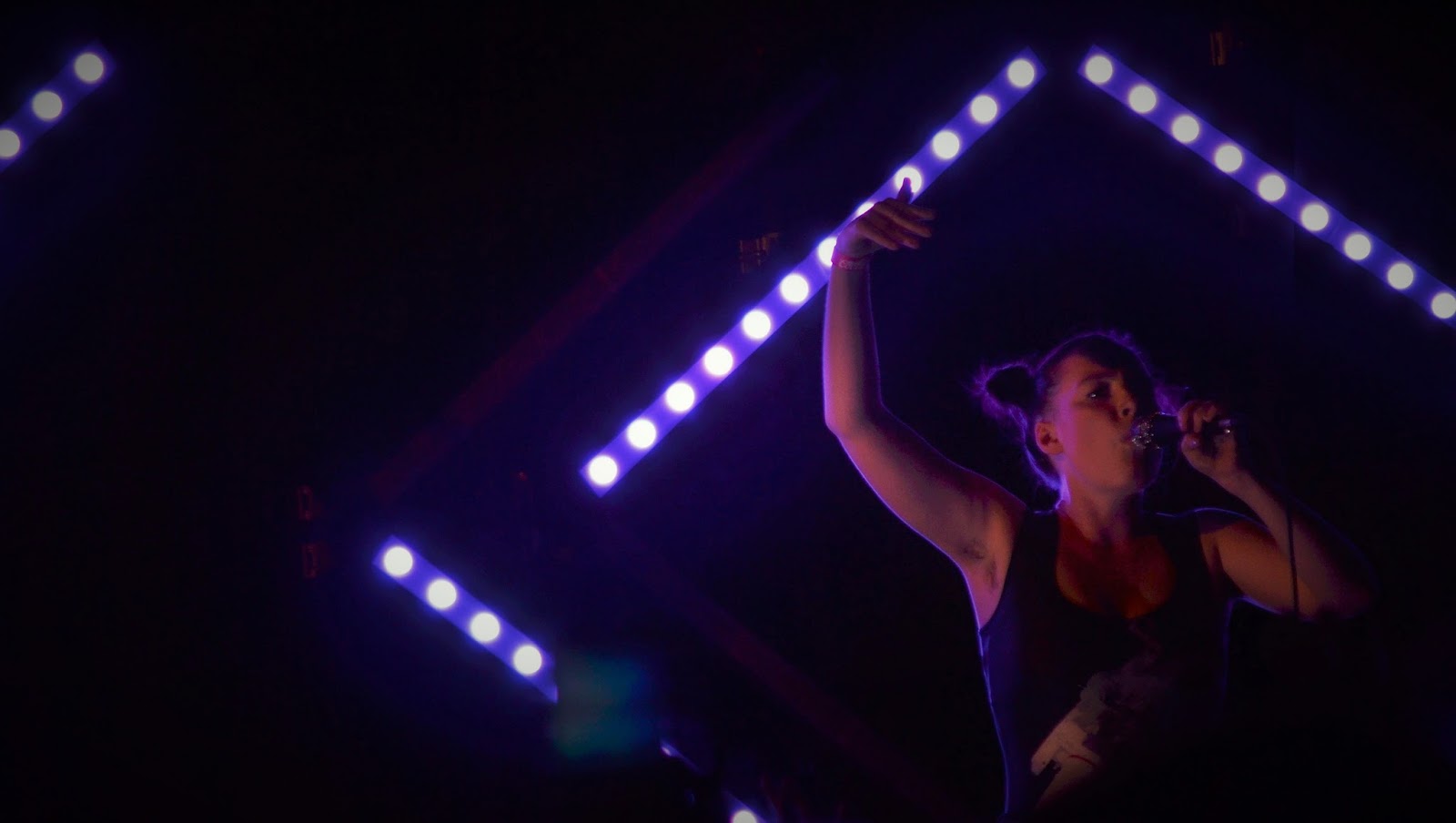 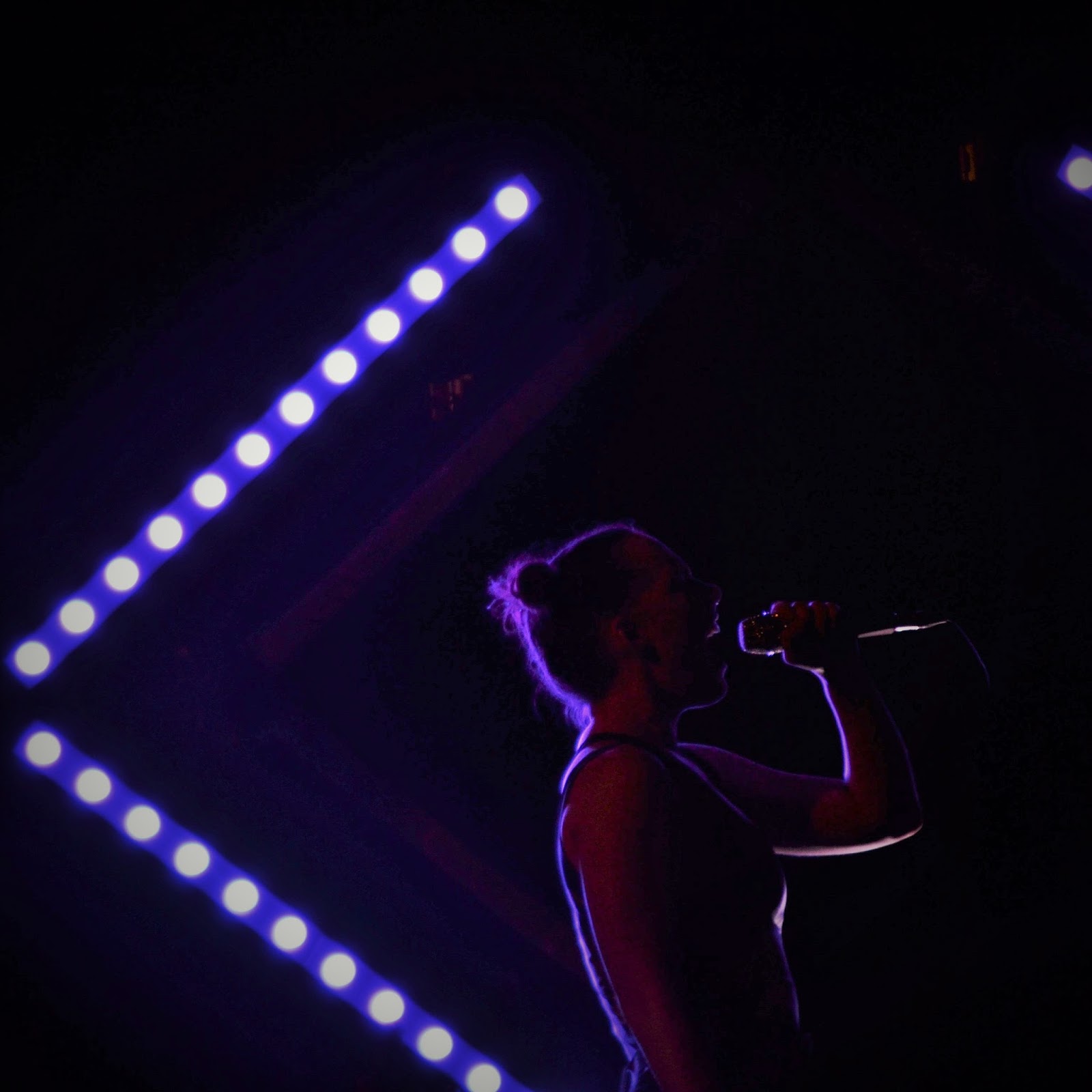 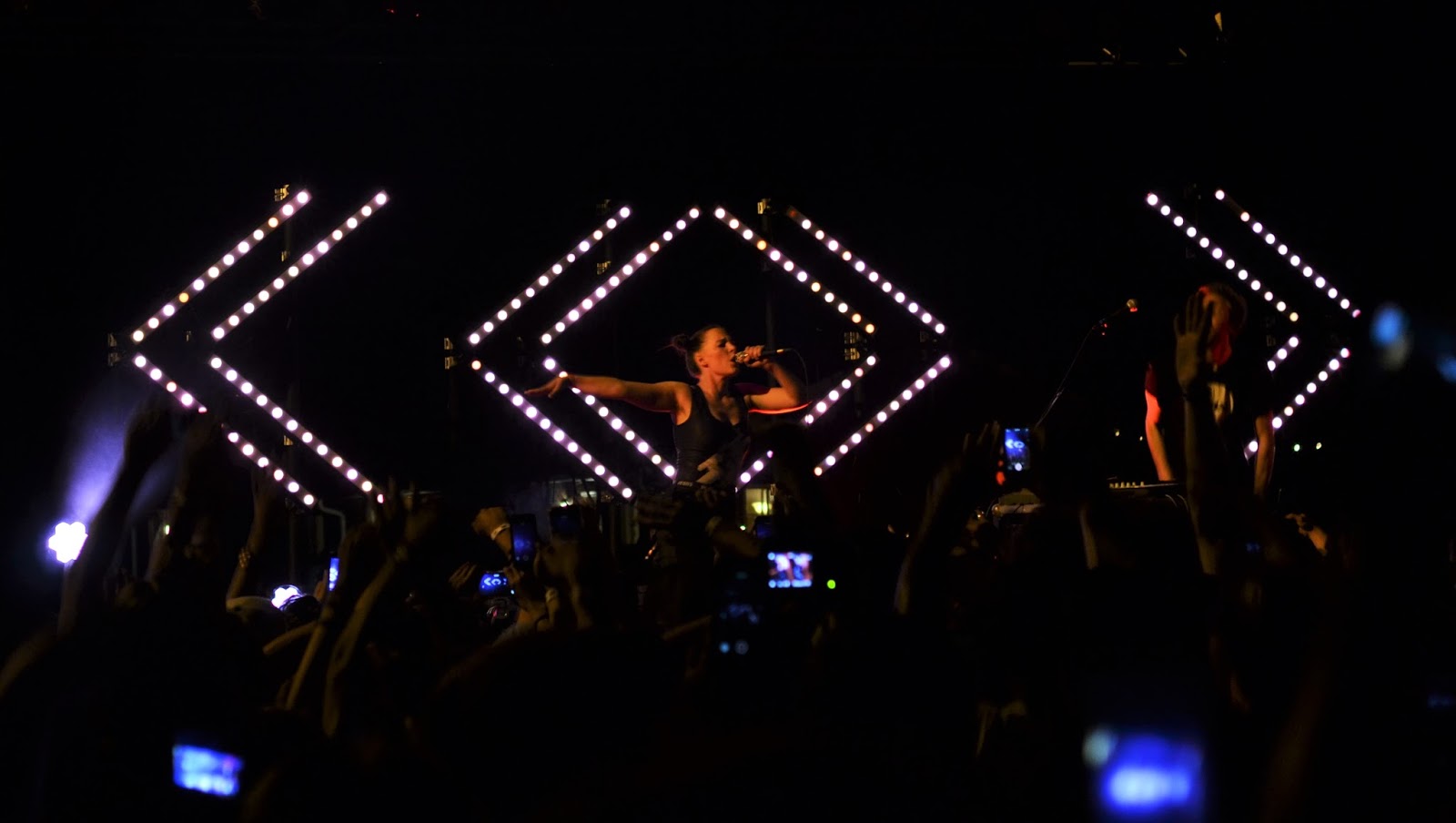 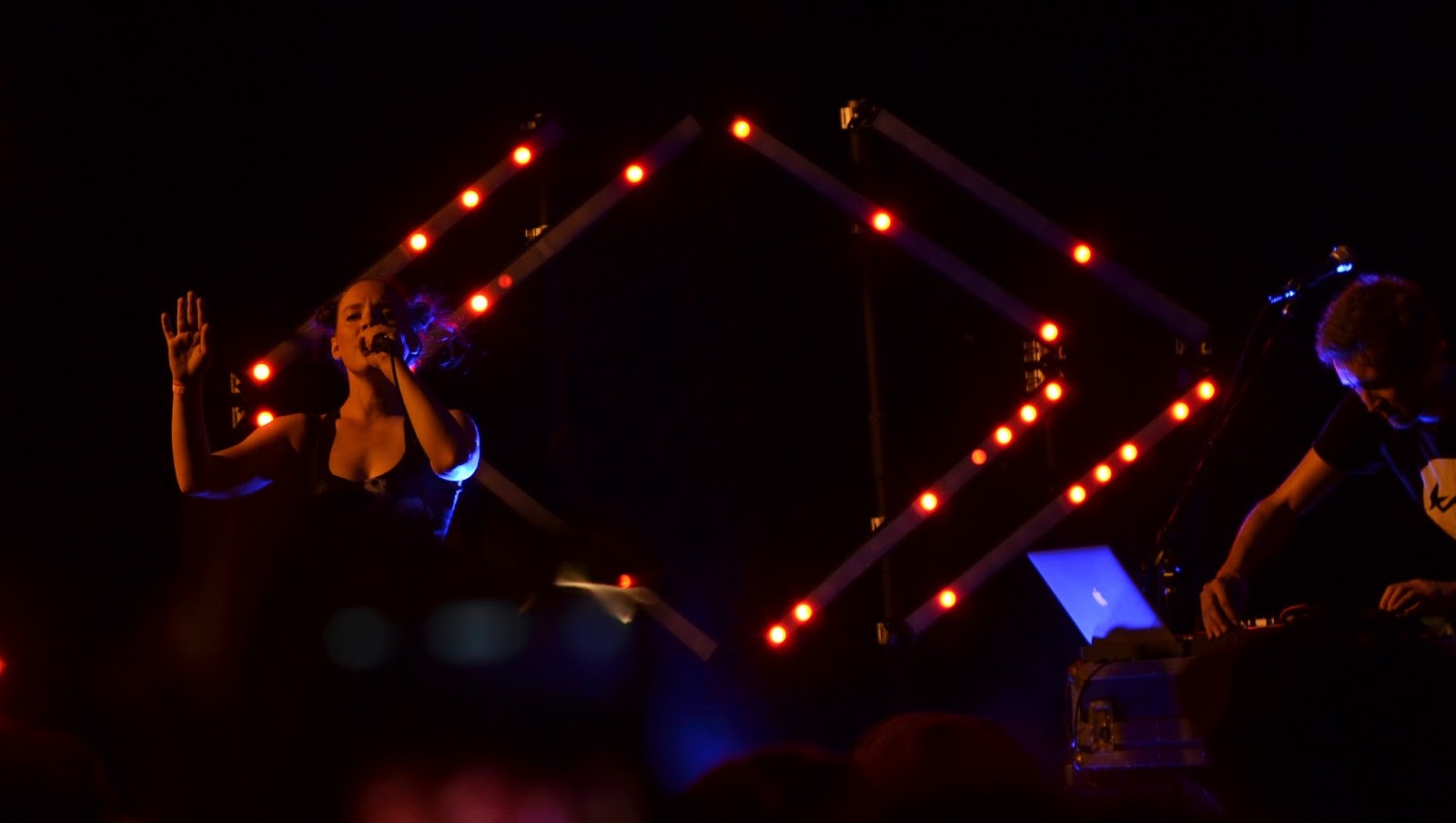 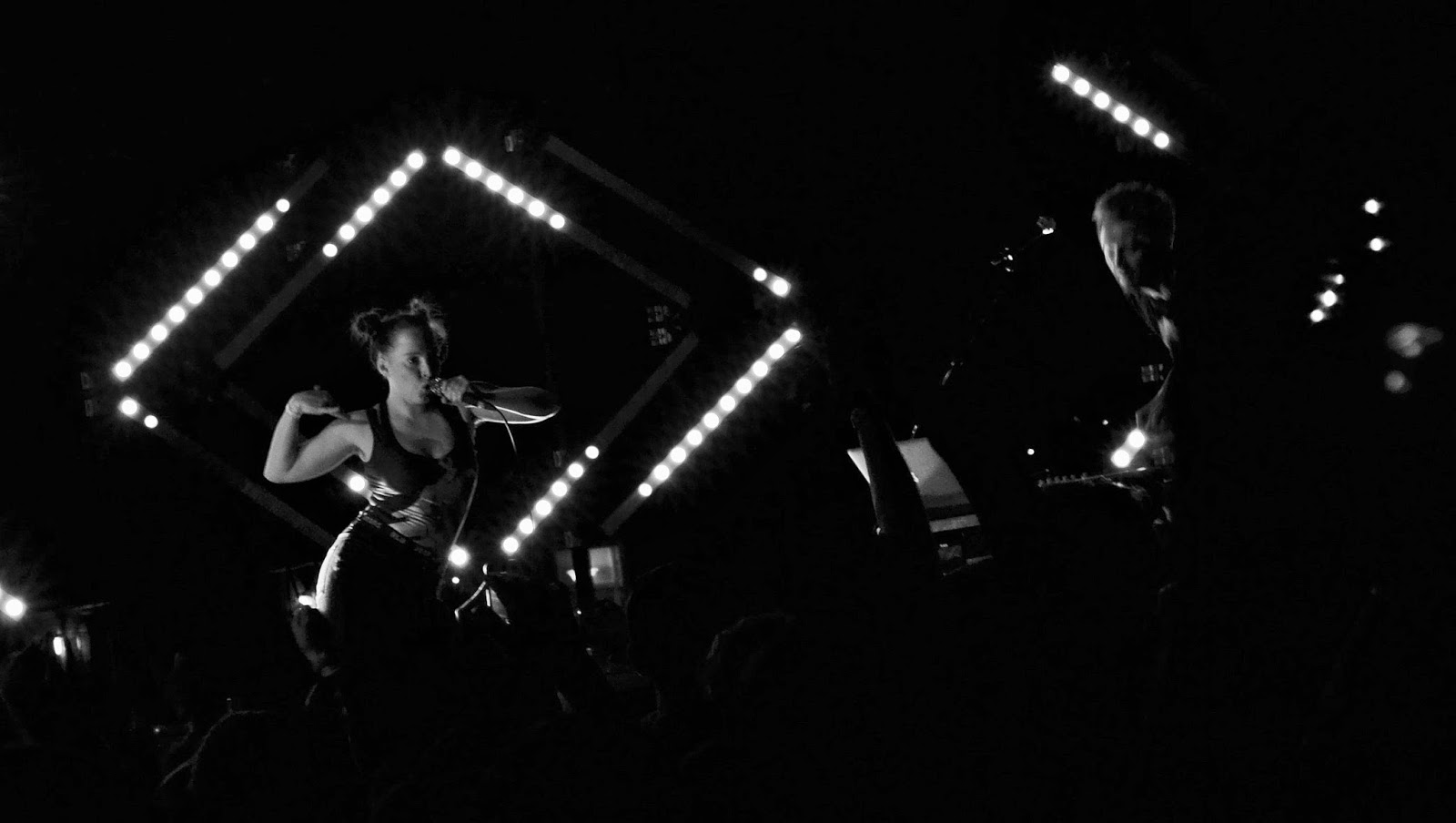 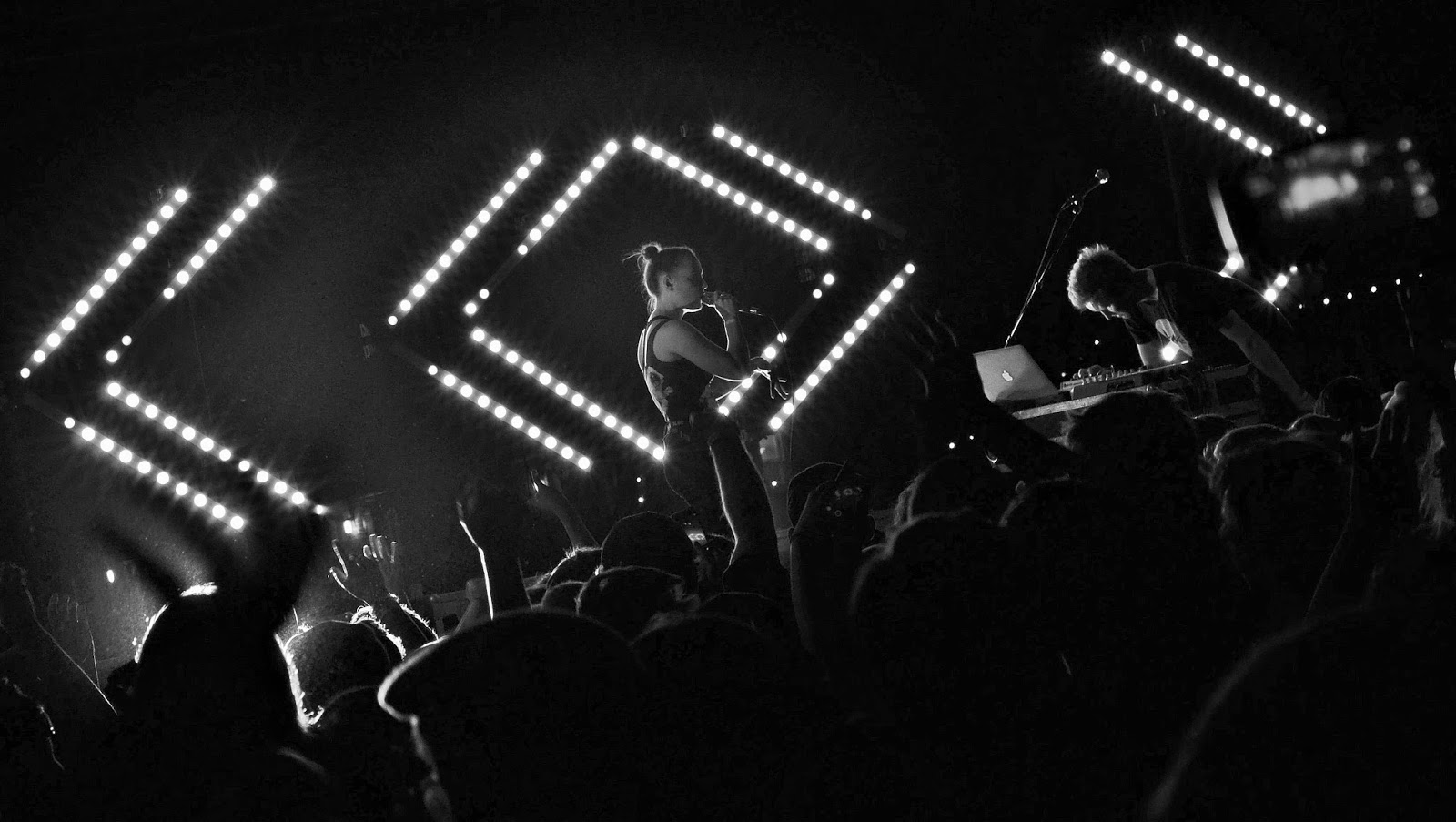 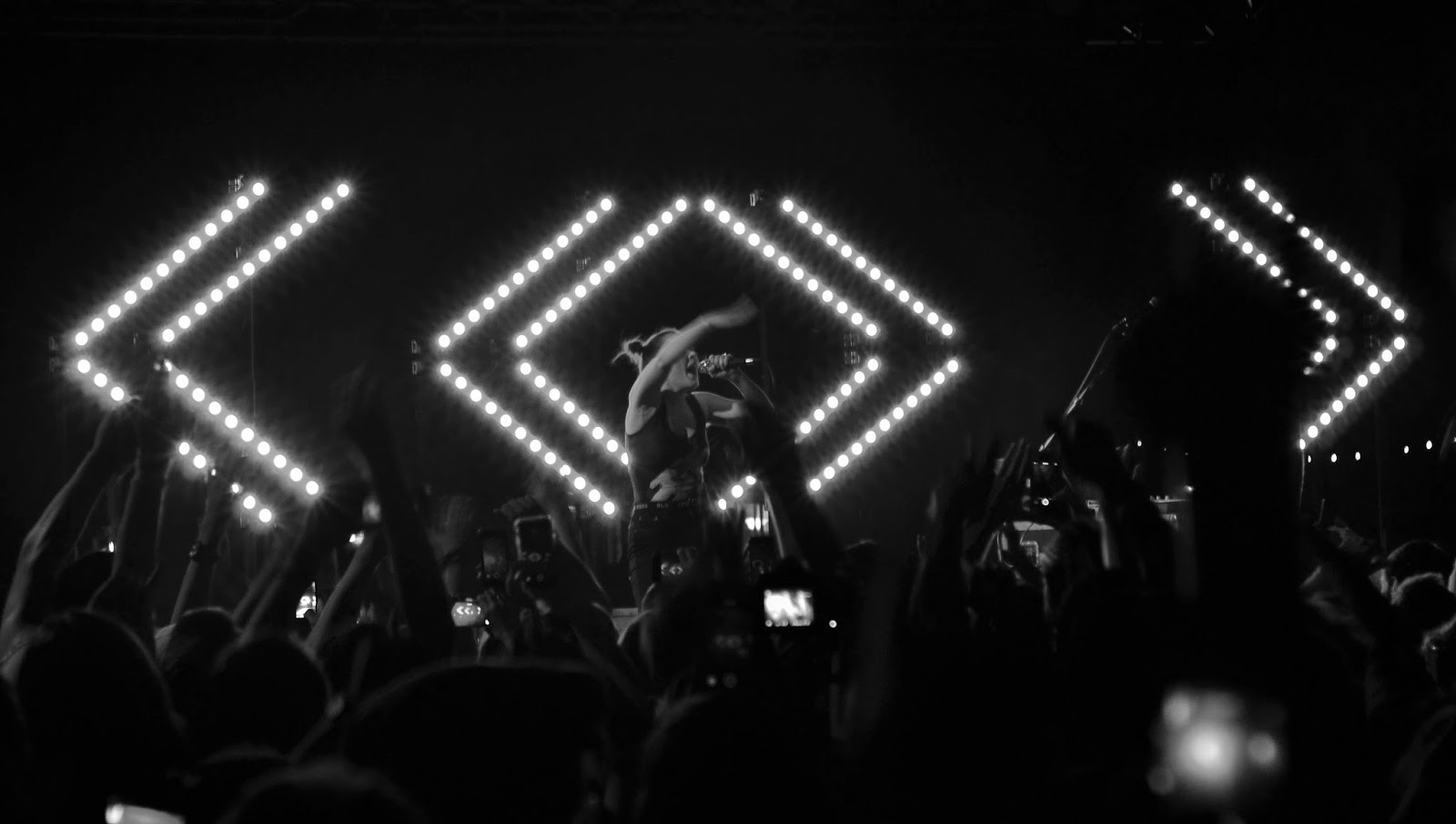 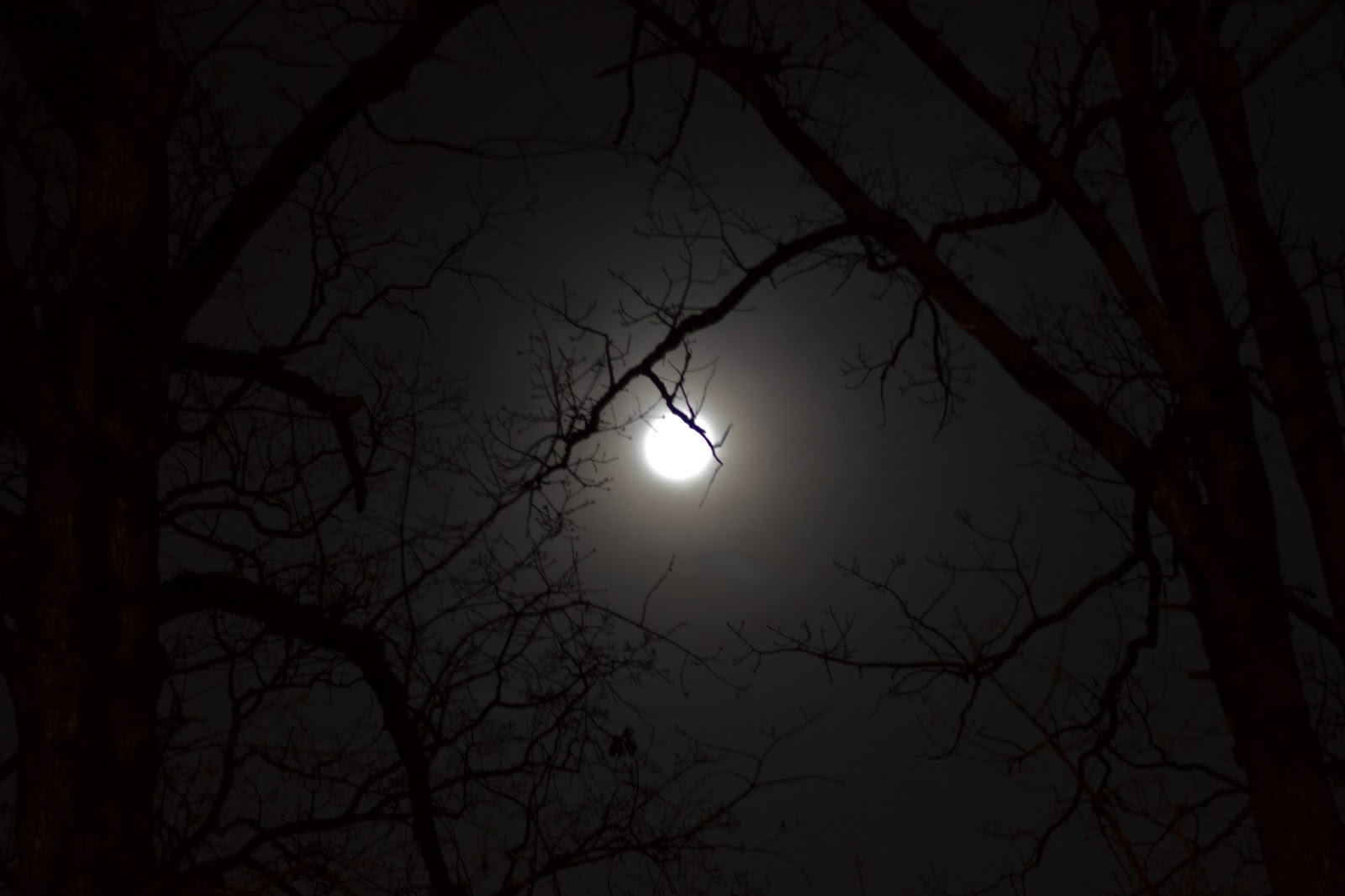