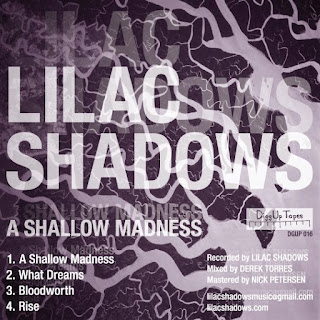 Okay, for starters at least, I have to compare Lilac Shadows' A Shallow Madness EP to T0W3RS recent release, If All We Have Is Time. There are just too many commonalities. The bands share 3 members (Sam Logan, Derek Torres, Karen Blanco; the other Shadows are Zack Oden and Nathan Price). Derek produced this one, and Sam produced T0W3RS' record. When you add the number of letters of "Shadows" and the numbers in Lincoln's birthdate, you mysteriously get... well, okay, maybe it stops there, but you get the point. There's some overlap. Nevertheless, they ARE two distinct bands, and sounds.

Based on these two releases, T0W3RS frontman Torres is John, and Lilac frontman Logan is George (don't go gettin' swelled heads, guys). Whereas ...Time was gritty, a little bluesy, and full of pain, heartbreak and redemption, A Shallow Madness is much more ethereal and contemplative. Not to psychoanalyze in a record review, but I'd venture a guess that Logan has had less tumult and heartbreak in his life, but more concerned with meditations about mysteries of consciousness, the universe, and the nature of reality. Okay, I'll put away my Jung.

But seriously, this EP deals with the realms of the mind much more than the heart or the nuts-and-bolts of living. It takes a trip into the subconscious, and the soundscape matches. When this space wrote up their release show a few weeks back, they were compared to '80s-'90s British pop and 'gaze. As you listen to A Shallow Madness more, you also hear further back in time. Bowie, Pink Floyd, all in a current indie context. Part of it, I guess, is the slightly Brit-sounding vocals. Still think there's a little VU in there, too.

The EP is basically 4 songs, though each is separated by an atmospheric intro which segues the EP together in a flowing manner, not unlike a dream. The title song sings of a madness that is indeed shallow, even  pleasant. Lotus, anyone? You're lulled in by a galloping, jangly beat and swirling guitars and synth. But from the first words, you're forced to doubt reality ("When you open up your eyes / do you see what isn't there?"), and wonder whether it's a healthy place to be or not ("and the sun that runs behind you eyes / is floating only for darker times"). What Dreams keeps us going in this sleep-like state (or are we awake?). It's a lullaby of sorts, but one that doesn't exactly reassure you. As in the first song, images of insecurity and seeking out comfort in darkness (figurative and literal) recur. The dark fairy tale feel is slower at the start, a simple echoing guitar line backed by quiet/chaotic noise. But it eventually opens up to rock out in segments. As the band's bio describes them, this song is, also, "Bright. Dark. Quiet. Loud."

Bloodworth picks it up, a really driving number that's a bit of an '80s throwback. It relies more on bass and drum, with guitar being mostly used for droning background and touches. Spiteful lyrics liken someone to a fallen star "comin' down through the clouds", their lies, and fires, burning. This one's mostly just "Dark. Loud." Rise wakes us up: "Rise up slowly, lift your eyes from the warnings / nightmares and longings, they won't find you in the morning". It's the first time the EP gets a little uplifting. But at the same time, it still longs for the subconscious: "It's simpler in dreams / as simple as nothing, only breathing gracefully". You know, back to being Jung, I'm sure there's a lot intended here about the power of dreams, as dark and scary as they can be, to heal. As the song, and EP, come to a close, neat little organ blurbs (steel drums?) pop in and out, giving us a little blips of contentment without the scary undertones.

Musically, A Shallow Madness soars. You just aren't sure where (or if) you're going to land.  And, thankfully, there's not a Ringo number on it (or on All We Have Is Time).  No Octopus' Garden, no (shudder) Act Naturally. Okay. Enough Jung. Enough Beatles. Just get the EP and go see Lilac Shadows next time they play... including Friday, May 4th at Kings, at the Vote AGAINST Amendment One Party, with Cassis Orange, and First Person Plural.  They also play Friday, May 11th, at the Cave.
Posted by Brother John on 5/03/2012 No comments: