Wilmont by THE LOVE LANGUAGE

CLICK to LISTEN
Few songs build, or are built, this well.
Pure bliss.
Posted by Brother John on 11/11/2010 No comments:

So I watched the Discovery Health show, Tourette's Uncovered, the other day. As the parent of a child with Asperger's Syndrome, Tourette's Syndrome, and ADHD, I have to say, it really steams me sometimes at the pain and suffering some parents will put their children through in the desperate search for a "cure".

These parents were having their child undergo Deep Brain Stimulation (DBS), a surgery in which a "pacemaker" of sorts is implanted in the brain, in an effort to control his admittedly severe Tourette's. Although it has shown benefits for other conditions (Wikipedia: Deep Brain Stimulation), DBS is unproven (and unapproved by the FDA) for Tourette's. It was costing this family upwards of a quarter of a million dollars. The main drawback of the kid's Tourrette's? He was teased in school a lot. This kid, near as I could tell, only had Tourrette's, and seemed well-adjusted, and not developmentally disabled or disabled in any other way. Yet he will now have a brain implant in which the risks are significant and their are no proven benefits for his condition.

My son has Tourette's, too, although that is minor compared to his social deficits via Asperger's. He can't make friends in the way we normally think of people doing so. He is an intellectual genius for his age (10), but socially behaves more like half his age. He literally cannot stand or sit still. He needs a one-on-one assistant with him all day at school. He is prone to fits of rage that he cannot even remember, nor recognize as they escalate.

And he tics. A lot. Sometimes he gulps or grunts. Sometimes he blinks. Sometimes it's almost non-stop, all day. Sometimes he'll go days without doing it. Lately, he's been doing the Pee-Wee Herman "Tequila" dance... you know, hands touching in front, then in back, then in front (he's never seen the movie). I suspected it was a tic, but didn't call attention to it until I asked him today what he was doing. He said "I think I remember doing it but I don't know why. Probably just a tic."

Now, am I going to put my perfectly fine... and perfect for who he is... boy through the torture of brain surgery, AND run the family broke, to fix something he hardly notices? And even if he did, and even if everyone else did, and teased the hell out of him, it would at worst be a life lesson that can make him stronger if we teach him and approach it with care as parents.

I am always amazed and upset at parents who put their kids through a myriad of unproven procedures, diets, and treatments in the name of "curing" their autism, Tourette's, or whatever. My son has issues, yes, but I don't know if I'd ever want to change a thing about him. I certainly don't want to "cure" him. He doesn't need it. He just needs understanding and a little help. As we always tell him, there are good things about your autism and bad. He has fits of rage, is awkward and socially inept, but is also a genius with a near photographic memory and a mind that astounds us constantly (even before he taught us how to count to infinty, when he was about 5).

I wouldn't change him for the world, and I certainly wouldn't put him through risky, unproven brain surgery to do so.
Posted by Brother John on 11/11/2010 No comments:

Space/surf aliens Man or Astroman? have reunited for the first time in a decade (save for a one-off for Touch and Go records awhile back) and are in the midst of a quick tour... only 7 dates... with the enigmatic title "Beyond the Metabolic Cage". I was lucky enough to catch them at the Cat's Cradle in Carrboro, NC, and they put on every bit the smokin' hot, hyper-energetic show I remember. Lights, video, and assorted (possibly dangerous) high-tech equipment were all in full-effect. Star Crunch was as great as ever on geetar, Birdstuff banged the drums, and on bass, Coco was ever the showman (or is that show-monkey, as his alien name is "Coco the Electronic Monkey Wizard"?). Occasional Astroman Victor Vector is handling 2nd guitar on the tour.

I say they put on a show, and it was impressive. Now, I've never placed too much emphasis on the "show" as opposed to the music. My old 'zine was called "It's the Music, Stupid!" for crissakes. But when the show complements already great music, and does so well -- thematically & visually -- it really does take a band over the top. One case in point is Of Montreal, whose psychedelic prop/light/screen show really adds to their performance.

So what can you say about a band of stranded aliens who close their show with a Tesla coil solo? Not much if the music sucked. But when it's the most intense, lightning-fast, spacey surf music ever played, interspersed with well-chosen samples from forgotten sci-fi films, and a great light show to boot (their entrance made me feel as if I was behind Devil's Tower witnessing a Close Encounter), then I say "Take me to your leader!"

While I never listened to MOAM's albums much, I always immensely enjoyed their live shows. But before this show, I had a hard time remembering how I had found them so musically interesting years ago (visuals aside). Surf can get repetitive, and even boring, at times.

Well, it took about 10 seconds of Star Crunch kicking in to refresh my memory. The music was, as I said, intense... to say the least. Bone-jarring guitar raced through the air at lightspeed. Thudding bass, drums, tight as ever, were in perfect sync, as were the sci-fi soundbites (timed just as on the albums). There was even a little rockin' on the theremin. Some live bands just reach right for your gut, grab a hold, and don't let go until they walk off the stage. MOAM are (still) one of those bands. Despite not having played much at all in a decade, they are at the very top of their form. The only downside was that they didn't play an encore (but they did play a good 15-20 songs).

Here's a few photos of the show, and a link to my video of the afore-mentioned Tesla "solo". If you have a chance to catch Man orAstroman? live, I highly recommend you do so. I'm not sure how much they'll tour again. I hear they have to catch the next transit to Sector B-9 or somewhere. 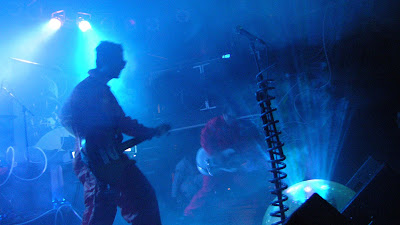 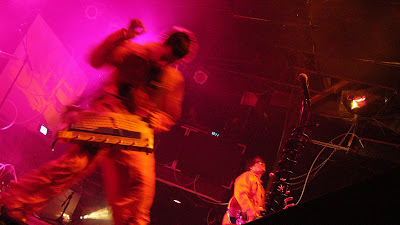 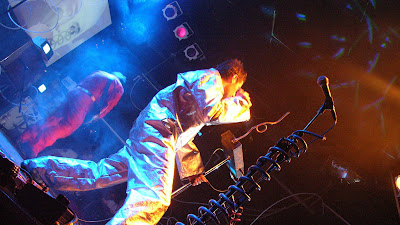