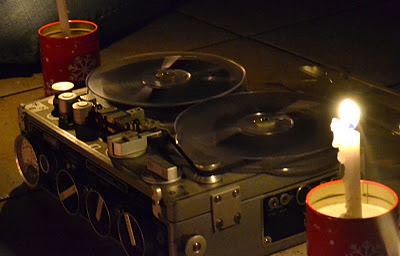 Not to snub T0W3RS and the Toddlers (who were both great), and Depressed Buttons (with whom I would liked to have caught up; I remember hanging out with some of them passing through Pensacola with Conor Oberst and Commander Venus, when they were but wee little ones). They all played later this night. But I caught the opening show of the Hopscotch -- ticket sales, not festival -- kickoff party at Tir Na Nog, and the evening really could have ended there and been great.

Merge Record's the Music Tapes brought the kind of whimsical innocence and purity that is far too lacking in this world. Having been a fan of the Elephant 6 Collective and their various bands for some time (Neutral Milk Hotel, Apples In Stereo, Of Montreal...), and having caught a snippet of Julian Kostner's musical saw and quirky singing and storytelling at the Elephant 6 Holiday Surprise Tour earlier this year, I was eager to see him play with his own band.

What it ended up being was a very sweet, intimate performance probably not unlike their caroling tour appearances (this was the initial stop on the route this year)... except they usually don't do it in clubs, but at houses where they're invited. Being unplugged, they unfortunately had to work to be heard over the crowd eating and talking on the other side of the bar at this admittedly early show (TNN has to sell food, too!). But no mind. The mouse orchestra, singing snowman, and mechanized organ-playing tower didn't seem to mind (you had to be there). 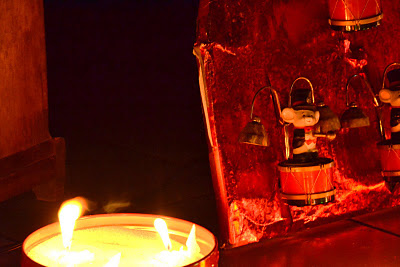 Right from the beginning, the crowd pulled up close, squatting near the candles, Christmas lights, and other decorations laid on the floor in front of the band. Julian Kostner began by telling stories, as a way of introducing and bridging songs, Christmastime or otherwise. One such tale was about how Archibald Leach (one Cary Grant, as a child) wrote a melody, which became lost in an old hat for years, and was found one day by Billie Holiday, and thus entered the lexicon of Christmas as "The First Noel". Whether true or not, his unique delivery and storytelling ability was utterly charming. Banjoes (usually being bowed, like a violin), signing saws (of which Kostner is a -- if not THE -- master), and various brass instruments made for a mysterious, quiet, sweet and sometimes funny performance. 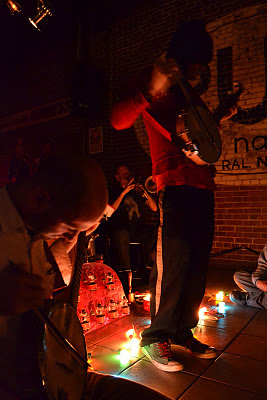 But the most touching part of the show was when Julian told the story of how people sing songs for many reasons... faith, love, fun, hope. Then he told of a hobo who, long ago, sat on a bench singing a Christmas song. And this poor man never would have dreamed -- how COULD he? -- that he would be here, 30 years later, performing that song with us, for us, this night. Then he set out a tape (on an old reel to reel), pushed play, and the band began to accompany this beautiful voice... the voice of a lost soul who has probably long since left this earth. But at the beginning of this Christmas season, he was here with us. At Tir Na Nog. In Raleigh, North Carolina. Serenading us. 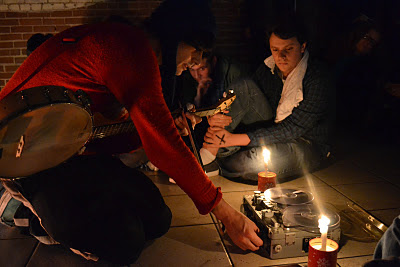 I wanted to ask who that man was, and what the song was, but I never got the chance. But the important part, I think, is that his voice is still alive and bringing pleasure to people around the country, many years later, being carried far beyond the hope and faith that he himself probably had.

This is what music, and a project like the Music Tapes, can do. It makes me think of my father, an opera singer for his entire life, who probably can no longer remember who Enrico Caruso was due to Alzheimer's. It makes me all damn misty-eyed. It makes me think I need to bring some music to play for him when I visit him at Christmastime.

Here are the Music Tapes singing "How Long Has This Been Going On?"... not the 1970s "AM Gold" song by ACE, but an oldie that's been recorded by Audrey Hepburn and Jerry Jeff Walker, among others. BTW, that's a bough of mistletoe Julian's passing over the crowd, as he sings about kissing.

P.S.: I asked Julian after if he (being a member of the legendary Neutral Milk Hotel, though not its driving force, Jeff Mangum) minded me using a lyric from "In the Aeroplane Over the Sea" as the name of my blog. He said "Sure, that's fine. I'm sure Jeff wouldn't mind." Again, touching.
Posted by Brother John on 12/03/2011 No comments: