Okay, So I Took One Photo of Neutral Milk Hotel 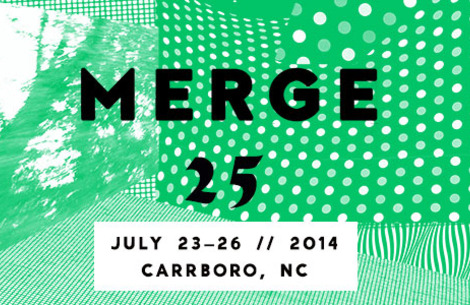 At last weekend's Merge 25 festival, celebrating the 25th anniversary of Merge Records, Neutral Milk Hotel closed the big concert on Saturday outside the legendary Cat's Cradle in Carrboro.   Many may know that it's a standing request of Jeff Mangum's and Neutral Milk Hotel's that their shows not be photographed or videotaped.  One can debate whether that's a cynical move with capitalist motives, an attempt at stemming the sometimes obscene reliance on technology that we've developed, or a heartfelt plea from an individual who grapples with legitimate anxiety issues.

But this is not the place for that debate.  This is my confessional.

I tried to respect those wishes.  I really did.  But about three songs in -- right about when Mangum began to strum the opening notes of King of Carrot Flowers Part 1 -- I just couldn't.  The lighting was just so... so... perfect.  Pale blue spotlights, dimmed at the band's request, illuminated Scott Spillane's beard like an inverted phoenix.  They cast a cobalt halo over Mangum, setting him aglow, making him seem almost angelic.  As if that wasn't enough temptation, the sunset began to paint the sky behind this scene with a turquoise hue that could only be described as surreal, a perfect natural complement to the artifice of the stage lights.

So I stole my way to the back bleachers.  And yes, I discreetly pulled the Nikon D3100 out of my backpack.  I removed the lens cap.  I checked my settings.  And then I snuck this one, quick, guilty homage.  I can't say that I regret it.  I won't.

Scroll down to see the photo...

It's one of the best photos I've ever taken, if I do say so myself. 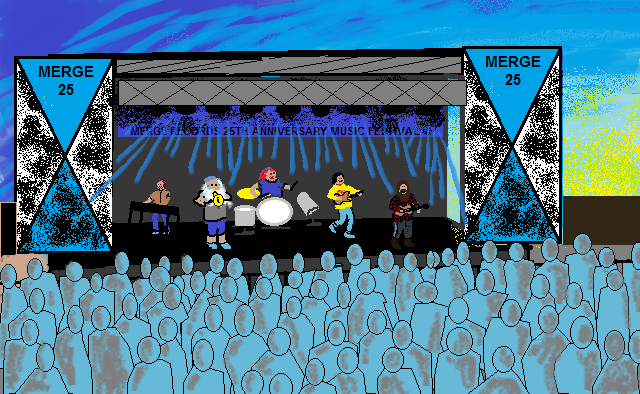 Also, below are a couple of close-ups cropped from the original (since I didn't want to risk more than one shot). 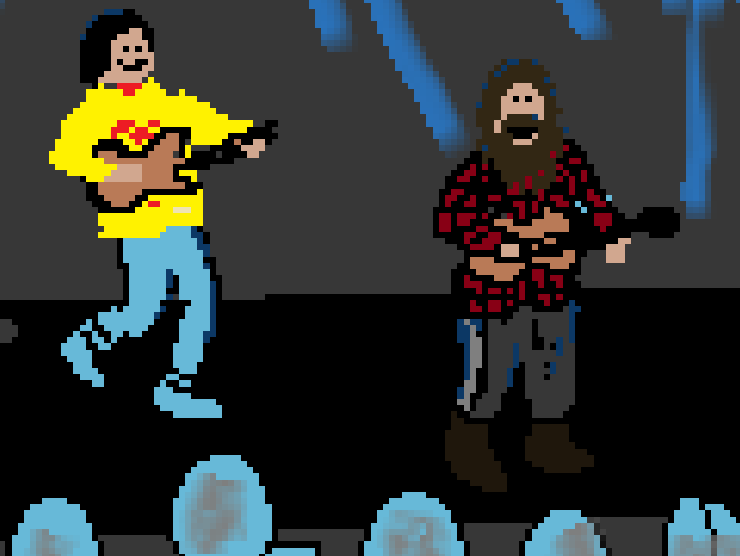 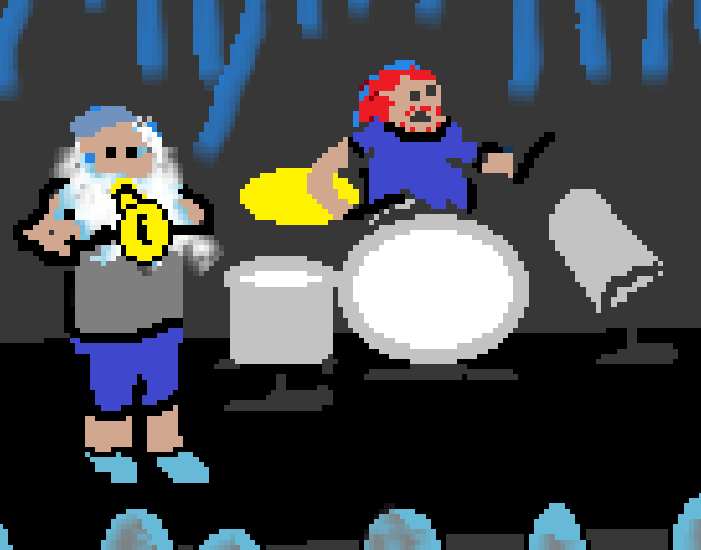 Meet the New School. Same as the Old School. 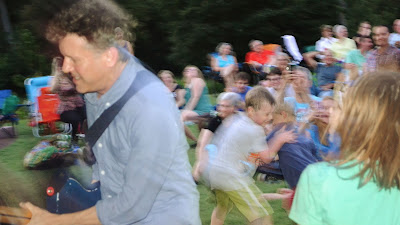 Within the span of four days in the past week, I attended what were -- on the surface -- two of the most diametrically opposite shows that could reasonably both be classified under the broad umbrella of “indie/punk”.  Saturday night had me crunched among sweaty bodies and sweatier walls at the Mattress Fort’s final show in Raleigh, while Wednesday evening, I was lounging among children and families in the idyllic setting of Duke Gardens for a Merge 25 concert.  The former featured Ok McQueen, Black Santa, FS, GHOSTT BLLONDE, and Naked Naps (billed as CuddleFest 2014).  The latter line-up included, only, Portastatic.

The Mattress Fort is – was, *sniff!* – an abode in the NC State area (with apparently incredibly understanding neighbors) that periodically held house shows of the punky variety.  Members of some of the bands live/lived there, the vibe was right, the circles converged, and what you got was one of the best little venues in the Triangle.  GHOSTT BLLONDE and Naked Naps of course were regulars, as were the Lollipops, Wilmington’s Free Clinic, and a host other in and out-of-town bands.  The place was becoming a local institution.  It was beginning to pop up on touring websites, for crissakes.  Which probably means it’s as good a time as any for a house venue to call it quits.  I had never been, so this was my last shot.

Merge Records and Portastatic… well, we all know about the big Merge 25th anniversary festival and celebration going on this month.  Merge is a local institution of a somewhat larger scale, the envy of indie labels the world over, celebrating a quarter of a damned century this summer.  Portastatic started as Merge/Superchunk co-founder Mac McCaughan’s “other” band, but they’ve developed a formidable catalog of their own.  I had always wanted to but never seen them, so I made a point of making this show, their first full-band set in years.

Despite the obvious differences between these two shows, they had much in common.  First, the level of unabashed rock’n’roll excellence was off the charts.  Second, the mean age of each crowd was around 20.  Of course at Duke Gardens, that was made up of two distinct groups… clustering around ages 2 and 38.
But what these 2 shows really had in common was that they were each a celebration of the DIY ethic.  The Mattress Fort demonstrated that ethic in its most raw and elemental way:  just grab a guitar, start a band, open a venue, publish a zine.  MAKE a scene.  They did that.  Much as Merge and Superchunk did a quarter century ago, which is what we’re celebrating (many of us with our kids) this month.

As far as the shows themselves, the Mattress Fort show was incredible.  I missed the first band, but the next -- Greensboro’s Black Santa -- blew me away.  They swerved between sort of a math-y feel and looser, poppier melodies.  Much fun.  So wow.  Then FS, from Greenville, NC, was a crowd favorite.  Also kinda mathematical, they kept it tighter, but delved into some open-ended explorations and instrumental tangents.  I was of course more familiar with the music of Raleigh’s GHOSTT BLLONDE and Naked Naps, though I had yet to see the latter play.  GHOSTT BLLONDE had the place exploding with their 50s-scented indie-pop, Marc Kuzio’s exuberance filling whatever gaps and crevices remained in the overcrowded room.  By the time Naked Naps played late in the night, their more melancholic, K-Records-style punk lent to the feel that the end was near.  Singer Catie Yerkes immediate, emotional vocals and their stripped down-yet-complex melodies made for an appropriate closer to this show, and this house.  I will have to see them play again (and again).  GHOSTT BLLONDE and Naked Naps are two of the very best young bands in a crowded Triangle scene, so it’s no wonder that the scene they created was special.  I hope the photos capture at least the feel of the place.  It seemed to get progressively darker with each show (I'll post more on Facebook later). 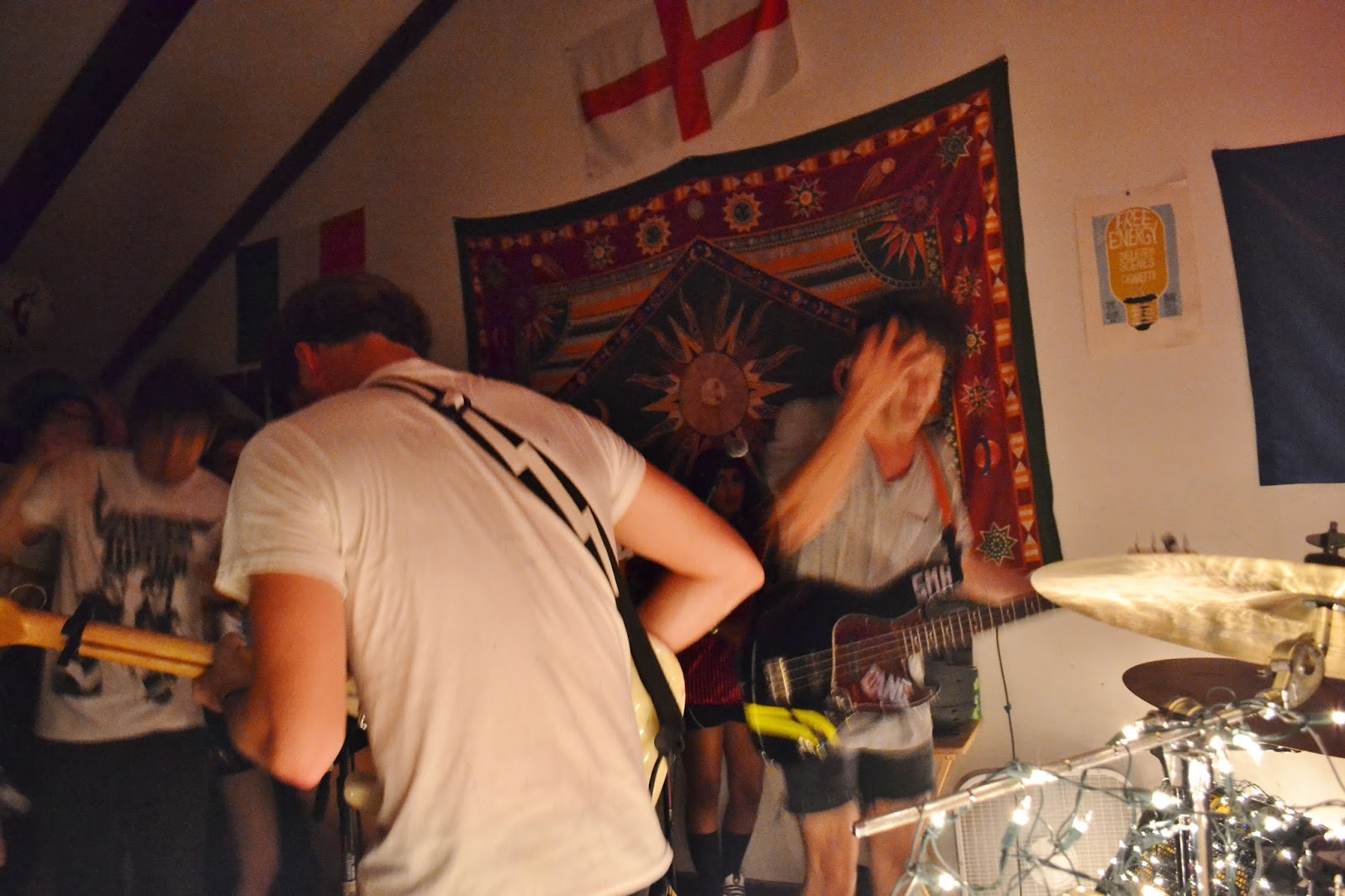 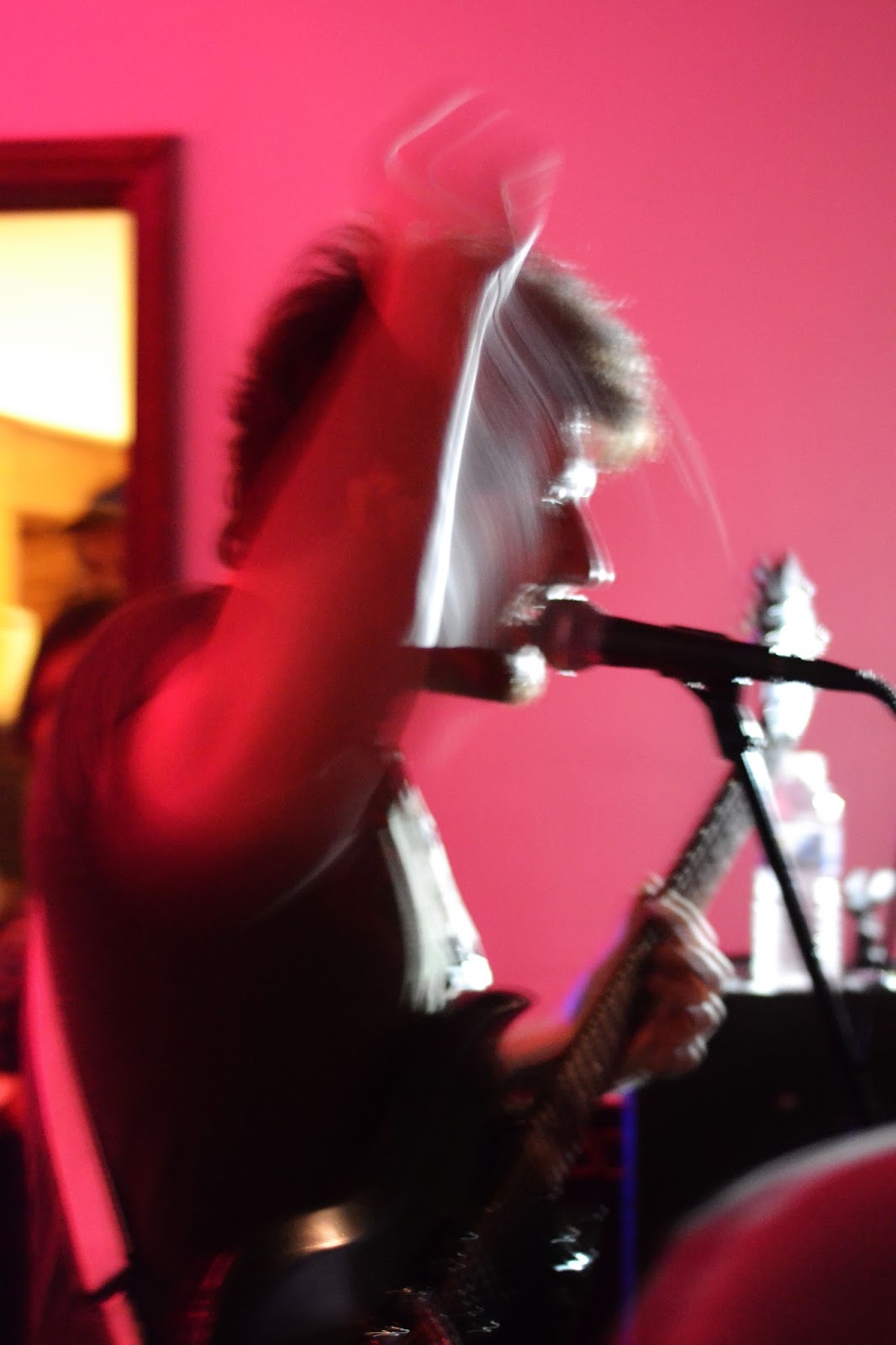 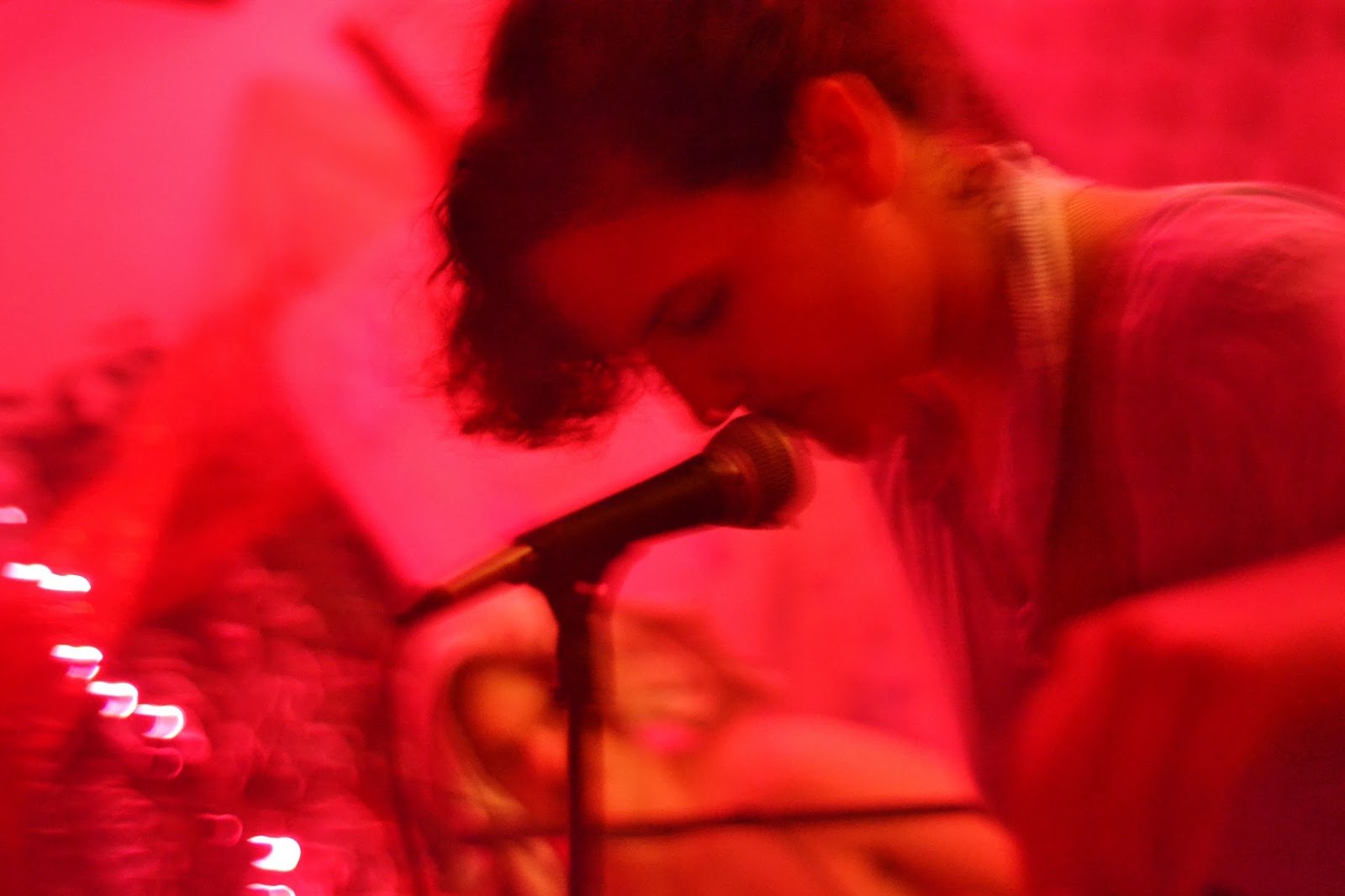 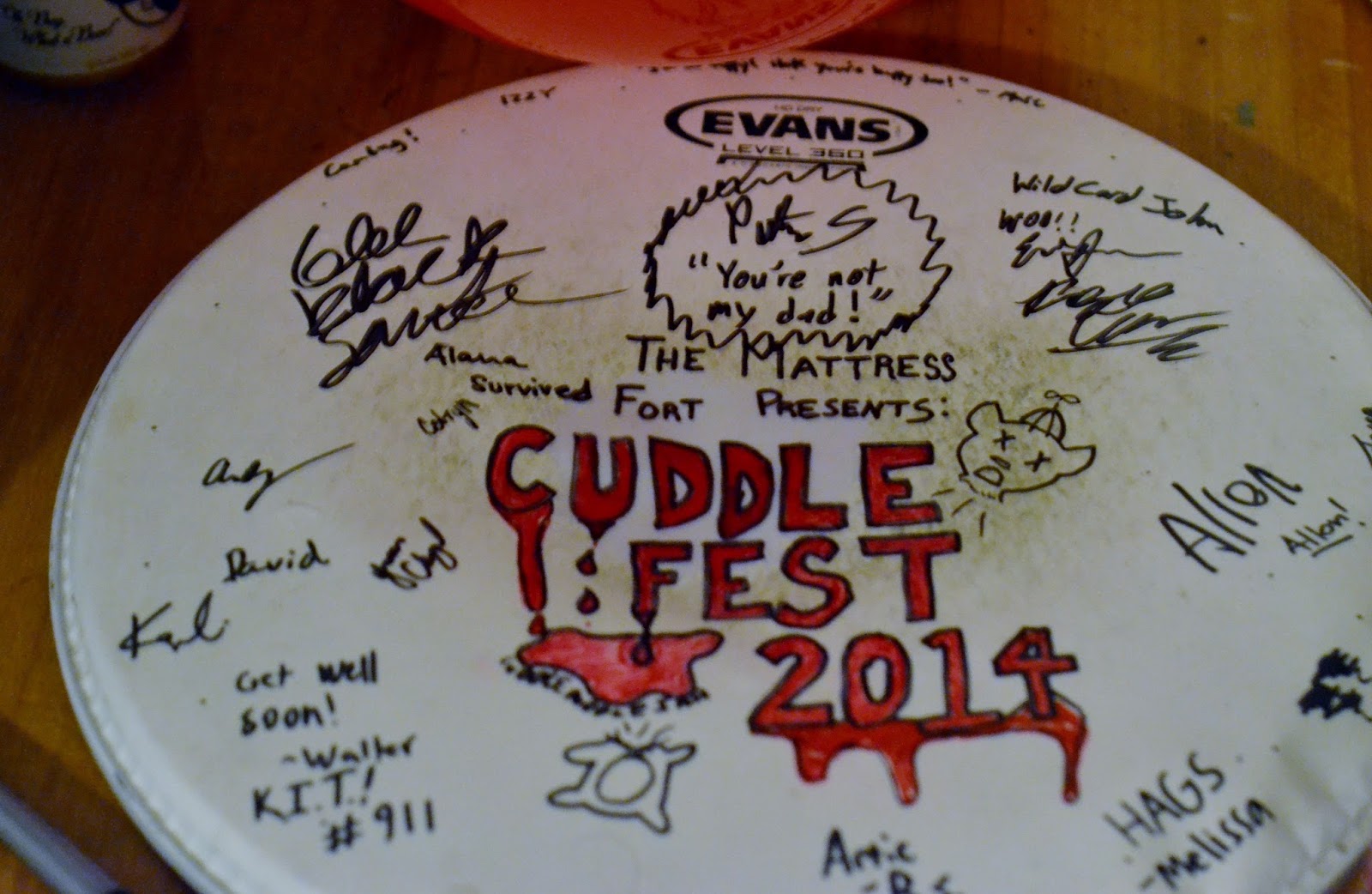 Meanwhile, back at the Gardens, it was one of those shows where I never realized how much of the band’s music I knew, and enjoyed.  I nearly wore out my copy of their second album, Slow Notes from a Sinking Ship, and went in wanting them to play as much from it as possible.  But I had forgotten that I somehow accumulated nearly the entire formidable catalogue mentioned above over the years (just never put it all on my iPod!).  They drew widely from all of it, including several which made me remember how good of a straight-up ROCK band they were: “Drill Me”, “San Andreas”, “A Cunning Latch”.  When they’d play some of the more sedate stuff, the kids in the audience (like, 5-yr-old kids) would yell “MORE ROCK GUITAR!”  But I’m glad they played the relatively quiet, and beautiful, “"Oh, Come Down" from Summer of the Shark.  It was one I was hoping for.  Near the end, as if to please the “kids”, they paid homage to Tommy Ramone (the last surviving Ramone who just passed away) by covering “Rockaway Beach” (which they just learned that morning; see video below). 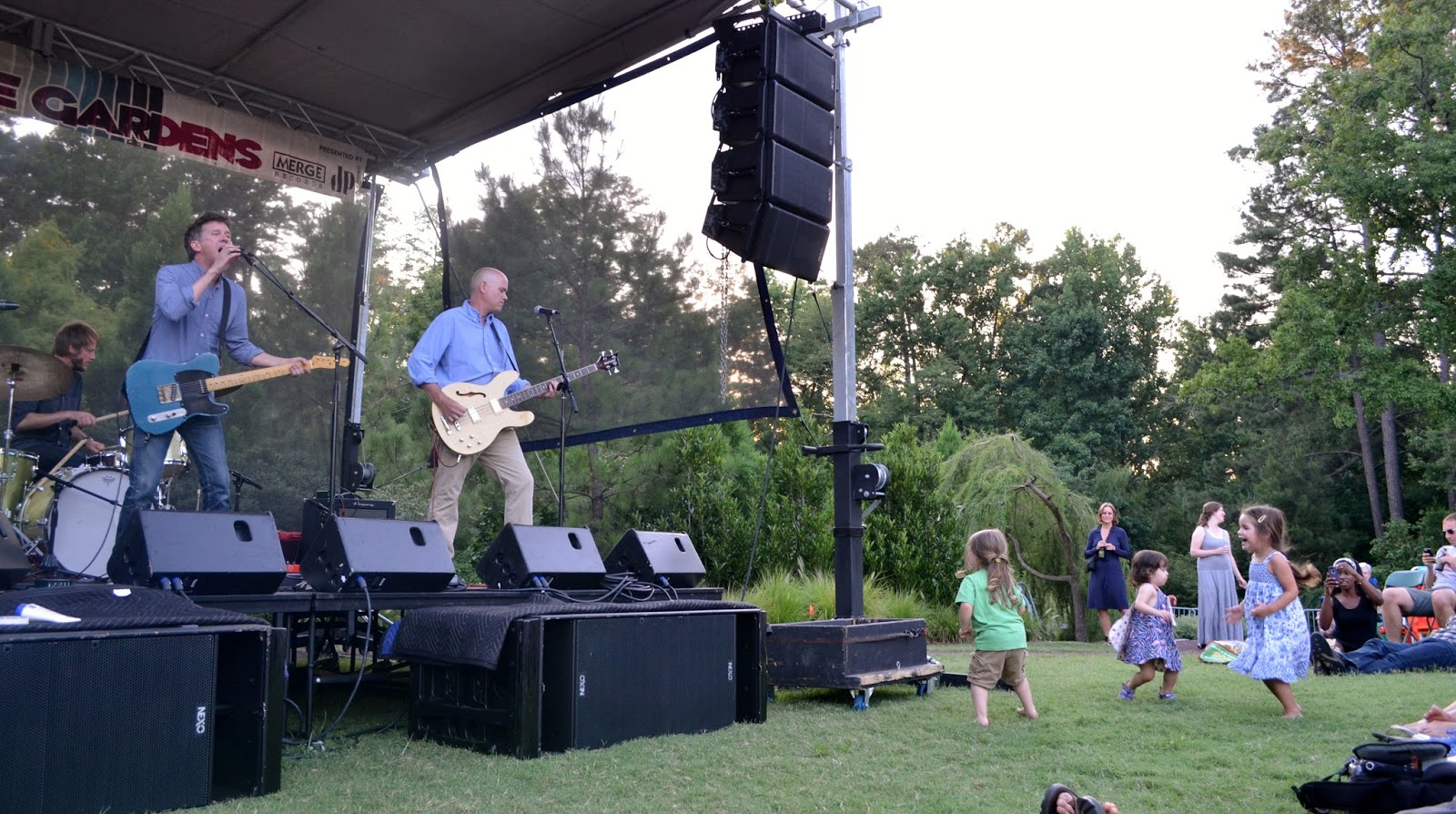 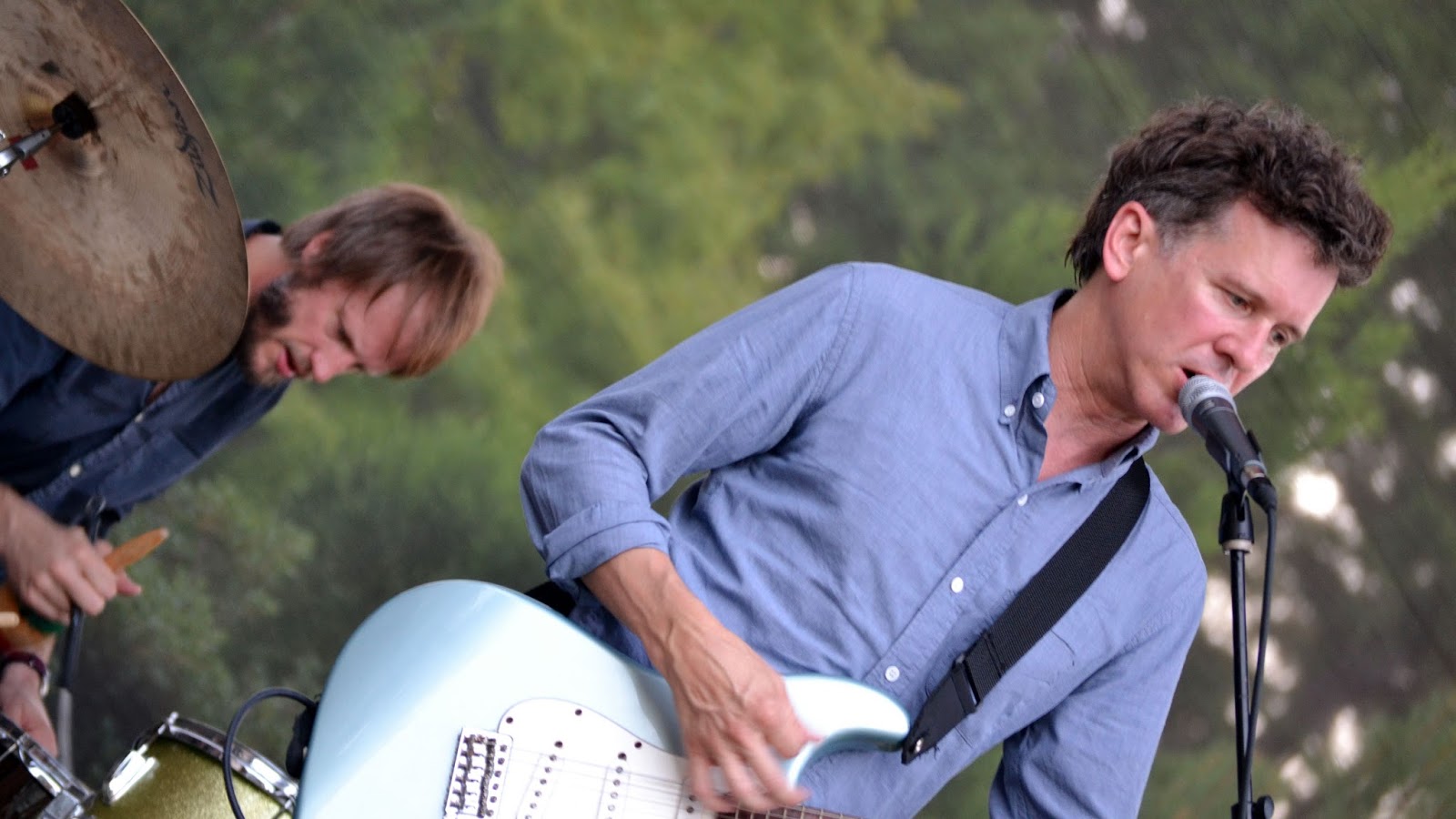 I guess this piece is about looking back, and looking forward.  A look back at the success and contributions of Merge, which has arguably lit a fire under a generation of musicians, with reverberations that will be felt for generations to come (and has, despite the pressures, remarkably held onto and championed the DIY ethic).  But moving forward, and in a sense no less important, is what those behind the Mattress Fort have accomplished.  They’ve stoked the coals and kept the fire burning for kids to come.

Someone asked me at the Fort if I thought this could happen again, if someone else would start up a good “unofficial” music venue.  Of course they will.  They always do.  It may not look and feel the same, and would be hard-pressed to capture what they did.  But there will always be somewhere else, someone else to pick up the torch.  It’s irrepressible.  Thanks to what they’ve done at the Mattress Fort, and what other DIY clubs and venues have done, and what the zines and record stores have done and are doing, and what Merge did 25 years ago.

Perhaps in 2039, a certain Dr. McCaughan (Professor Emeritus of Music Studies, Duke University) will be heading a panel on music publishing at Merge 50.  Marc and Catie will be heading the next great Triangle indie imprint, Brent Road Records.  And little Lucy or Timmy – you know, the one dancing up front at the Gardens yesterday – will be lining their walls with mattresses and asking their friends to keep the doors closed so the neighbors don’t complain.

Keep an eye on the facebook page later for more photos and video from both shows.  But for now, here's that vid of Portastatic doing the Ramones...