So I experienced my first earthquake today, here in NC: the 5.9 centered up in VA. All this reminds me of a tongue-in-cheek story I wrote for my ‘zine back in the day, when a similarly "ferocious" quake struck near my then home on the Florida panhandle. I remember actual news stories emphasized jars that fell off of grocery store shelves. Re-publishing below for your (or maybe my own) amusement. 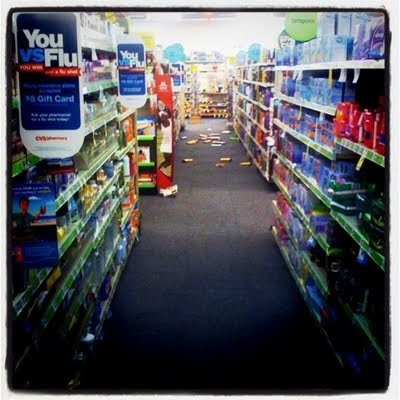 The Great Flomaton Quake of 1997

At 3:35 AM on the morning of October 24, 1997, southern Alabama was struck by an earthquake (no kidding) measuring 4.9 on the Richter scale (really, we’re serious!). The epicenter was located near the town of Flomaton, just 55 miles north of Pensacola. It was the second quake in a few months to strike the area, the first being a 3.1 in May 1997, and was followed by a series of aftershocks. While damage was minimal -- a few jars at a grocery store and shaken spirits -- it was such an unusual event for our neck of the woods that we sent our roving reporter north to investigate. He filed this stunning, surely Pulitzer Prize-winning report on the devastating aftermath of this catastrophe.

“WE KNEW IT WOULD HAPPEN”
October 25, 1997. The tiny pastoral community of Flomaton, AL, appears shaken, both literally and figuratively. Residents are haggard and on edge, not yet settled from the previous day’s tragic yet awesome display of nature. These simple people -- farmers, ranchers, fruit of the land -- can no longer trust the very ground beneath their feet. Despite the mercurial nature of the temblor, it seems to have been not altogether unexpected. “When that 3.1 hit in May, we wuz shook up a bit, but we knew what it really meant” said city councilman and postmaster Esa Burns. “We knew hat wuz comin’. The Big One.” Indeed, they were right.

Other residents expressed similar anticipation in the hours preceding the tremor. Said Clem Bradford, of Flomaton Livestock and Feed, “Well, you could tell somethin’ was up Thursday, the night before, because the sheep were nervous. I mean... moreso than usual.” Lay minister Eugenie Johnson likewise claims to have felt a similar sense of foreboding. “Of course, we knew it would happen. It’s all there in Revelations. The End Time is near!!” When asked if she felt that the earth’s movement was indeed a harbinger of the Christian Judgement Day, she fell to the floor writhing and began babbling incoherently.

THE HORROR
Later, in Brewton, a scene of utter devastation spreads out before me. The broken glass, the sickly sweet/sour smell, assault my senses as I come face to face with the casualties of Nature’s brute force. The earlier interviews with the locals did nothing to prepare me for what I now witnessed.

Steve, a stockboy at the Brewton Winn Dixie, related the story. “I was working late, pricing salad dressing. I heard a low rumbling, then the ground started to shake. I thought it was a truck. I had no idea what was happening. Out of the corner of my eye, I saw something green. Before I could think, I jumped to the side, and six jars of spanish olives came crashing down right where my head was.” He continued to sweep up the broken jars and olives, a futile attempt at rescue and recovery. F.E.M.A. officials had not yet arrived. One could only guess that their resources were already overtaxed by the probable dozens of plates and dinnerware pieces cracked or broken throughout the county. Steve continued: “One second later, and I would’ve been a goner! Well, at least I would’ve had a nasty bump or two on my noggin.”

Others were not so lucky. “I wazza right next to the first jar to-a go” said Luigi, a 24-ounce bottle of Kraft Zesty Italian. “He was an OK guy. One minute, we’re… how you say... reminiscing about the old country. The next... I’m-a sorry. I can’t go on!” Jim, a nearby jar of pickled baby corn, stammered “It was horrible! My little safety button almost went!” An unidentified, surviving olive jar gazed down at the shattered remains of his loved ones, repeatedly mumbling “The pimentos. The pimentos. My God, the pimentos.”

BE PREPARED
Despite the crippling losses to Aisle 17 (“Ground Zero”, as the locals have dubbed it), one could say that this piney village was fortunate. Historical records indicate that an amazing 20 cases of olives AND 12 bottles of red wine vinegar were lost in the great quake of 1812. Modern buildings of more quake-proof design, combined with the recent proliferation of plastics in the food storage industry, may prevent such a tragedy from ever occurring again. Still, it IS best to be prepared. The following are guidelines for earthquake preparedness released by the newly formed citizen’s group, Flomatonians Against Yon Quakin’ Uv the Earth (FAYQUE):

1) Make sure your digital video camera is charged.
2) Verify that your YouTube account is active.
3) Move all briny foodstuffs to the rear of shelves.
4) Tune into your local AM talk radio station for irrational fearmongering (actually, this can be done whether or not a quake strikes).
5) Kiss yer ass goodbye, just in case.
6) Oh yeah, if a quake occurs, get under a table, or a china cabinet, or something.
(Editor’s note: Safety Guidelines 1 & 2 have been updated for 2011, to remove references to the show REAL TV, and something called “videotapes”.)
Posted by Brother John on 8/23/2011 No comments: