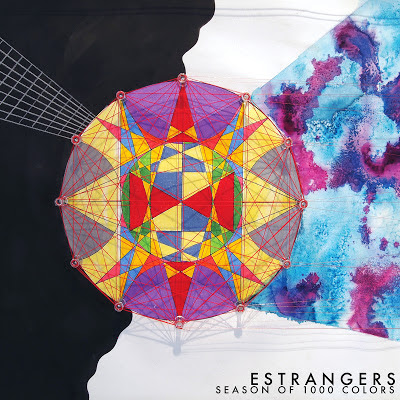 Winston-Salem's Estrangers have always had a knack for a melody.  They've got it in spades.  They use those spades to dig deeply into the 50s and 60s, filtering retro-pop through an indie/modern lens.  In this respect, they've drawn comparisons to Raleigh's Love Language more than once.  But lets face it, Stuart McLamb wears his influences on his sleeve almost as much as his heart.  It's more apt to say that these bands, and many others today, mine their pop-music ore from the same veins... Motown, Wall-of-Sound, 1960s power-pop, etc.  And while their earlier material was firmly rooted in the past, the recent EP Sunmelt saw Estrangers experimenting a little more with an atmospheric, keyboard-laden, beachy sound.  It was kind of rough and simple, and I wasn't sure what I thought.  But I see now where they were headed with it.

Season of 1000 Colors has Estrangers continuing down that road, fleshing it out it and exploring possibilities.  With this album, we see a band starting to come into its own.  There's a continuous synthy, reverb-laden undercurrent that gives the whole affair a spacey-summery feel, and which takes retro influences forward to somewhere entirely new (and us along for the ride).

Appropriately, Season starts by stepping back a bit.  The instrumental slow-dance Paradiso invites us in, ironically starting what will eventually evolve into a summer burner of an album with... sleighbells.  Then, the pounding, echoing drumming-and-strumming intro to Cape Fear jumpstarts the album.  Frontman Philip Pledger's vocals soar upwards, singing about salt on his feet and ships at sea, and we cross the solstice.  You can feel space opening up as the "aaahhh-aaahhhs" sway like leaves in the background.  Scatterheart follows with a more conventional pop bender, before we really kick into high gear.

The album's centerpiece is the trio of Dayzd / Moonraker / Monarchs.  Dayzd definitely has a 60s California-coastal vibe. It's bouncy as hell, but has an almost-eerie backing organ, which then segues perfectly into another intrumental, Moonraker. Moonraker is a film noir spy-flick theme with garage-y farfisa and surfy twang, backed by layers of distorted guitar.  As it builds and then breaks down, distortion crashes headlong into Monarchs.  It's an ambitious song from the get-go, full of bombastic swells and flourishes. Pledger begins with the at-once cocky and self-deprecating line, "Lucky stars, I'm always wasted in the back of borrowed cars".  The clean, high vocals ride soaring layers of yet more keys.  Just when you're thinking maybe Estrangers have bitten off more than they can chew, this song delivers.  Season was mixed by keyboardist David-Todd Murray, and his influence on this album, and the band's evolution, is unmistakable and welcome.

After that trio, a breather is needed.  Hold Me Close (L'Inverno) takes us back to winter, albeit temporarily.  It's s a sincere, 1950s charmer, the kind of which Jonathan Richman is so fond.  Lovelorn aching gives way to the psychedelia of Blackberry Drift Mantra, the album's third instrumental.  Normally, I'm not fond of multiple instrumental breaks on an album.  But here, they work.  Mantra's followed by another bouncy pop-flyer, Love's Pure Light, driven by a great riff and bass, and then the Beatlesque piano ditty Mrs. Bee.  Sunmelt, from the afore-mentioned beachy/experimental EP, closes out the album.  But not before the coda, Las Puertas, revisits the opener by dragging it into this same realm.  So it, like Paradiso, is likewise appropriate. With Season of 1000 Colors, Estrangers are closing old doors and opening new ones.
Posted by Brother John on 6/12/2013 No comments: