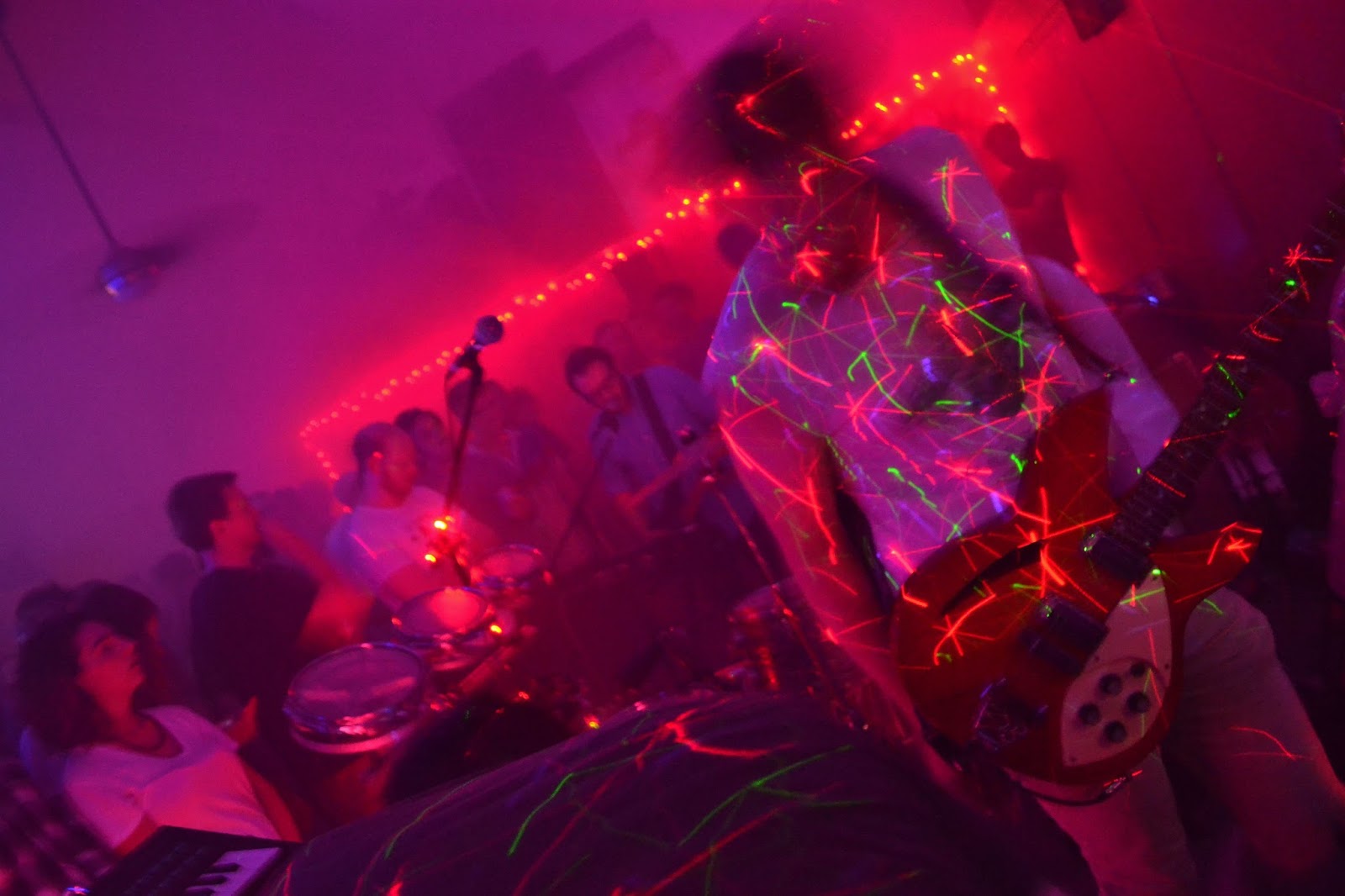 In July, I wrote here that at the last Mattress Fort show in Raleigh, "Someone asked me if I thought this could happen again, if someone else would start up a good 'unofficial' music venue.  Of course they will.  They always do.  It’s irrepressible."

Well, Raleigh proved me right... in about 2 months no less.  The Kosher Hut is a little house venue on the edges of NC State, and if their second show was any indication, they may already be outgrowing their rather impressive quarters.  Hint:  don't book Pitchfork buzz bands too often.

The show was set to be Raleigh's Whatever Brains and Durham's Silent Lunch... an older band I've only seen once and have been dying to see again, and a newer band I'd only seen at their first show and wanted to see how they're coming along.  Already two great local bands, and then Alex G got added (sometimes referred to as SANDY Alex G to avoid confusion with this Alex G).

The room is a great one... spacious and colorful, probably someone's "man cave" in another time, now co-opted for more creative uses.  It's decorated with wonderful, visually colorful, emotionally dark paintings.  There's tons of space for bands and audience.  Here's a couple of shots before the crowd filled in (and boy, did they fill in). 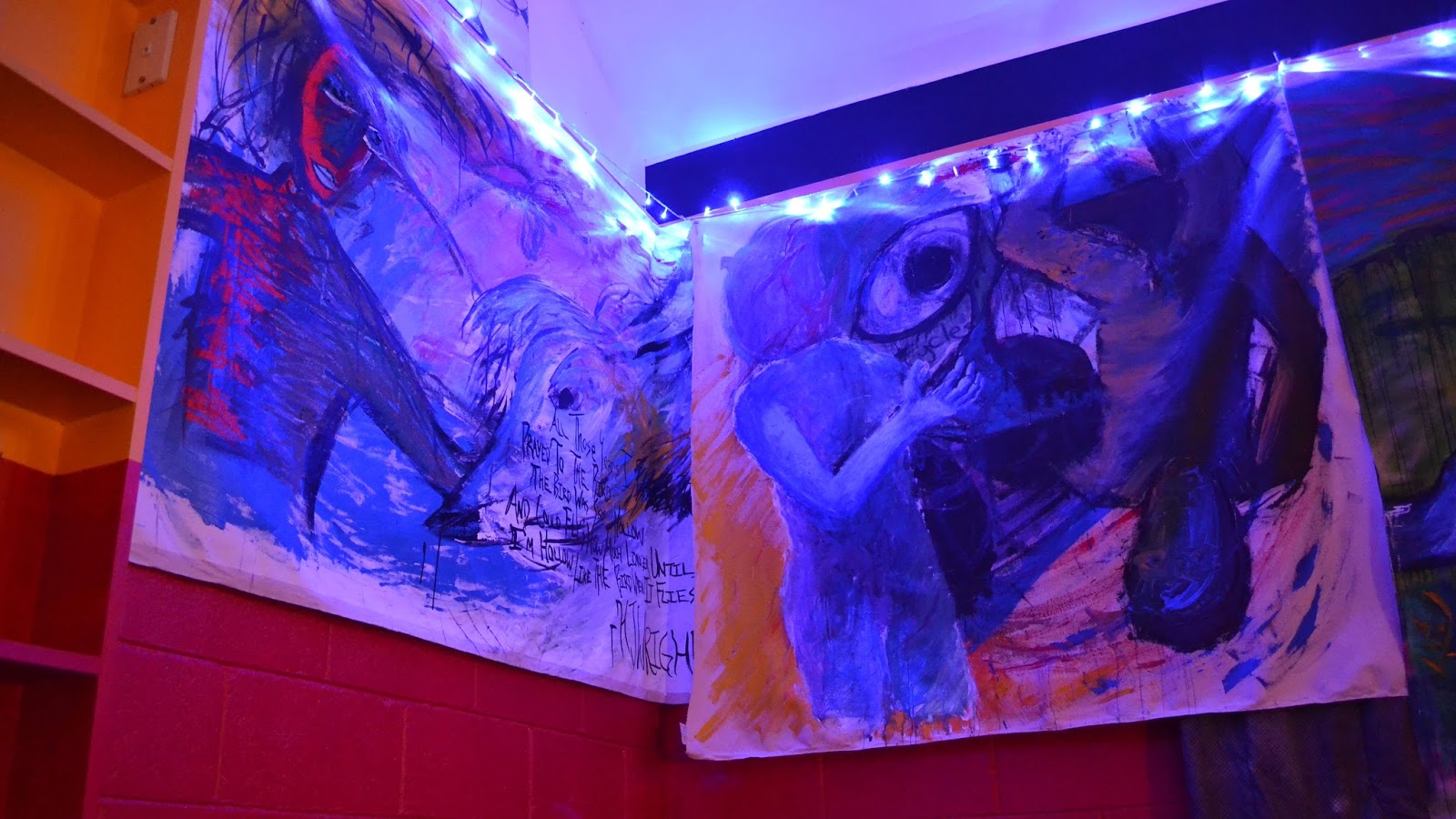 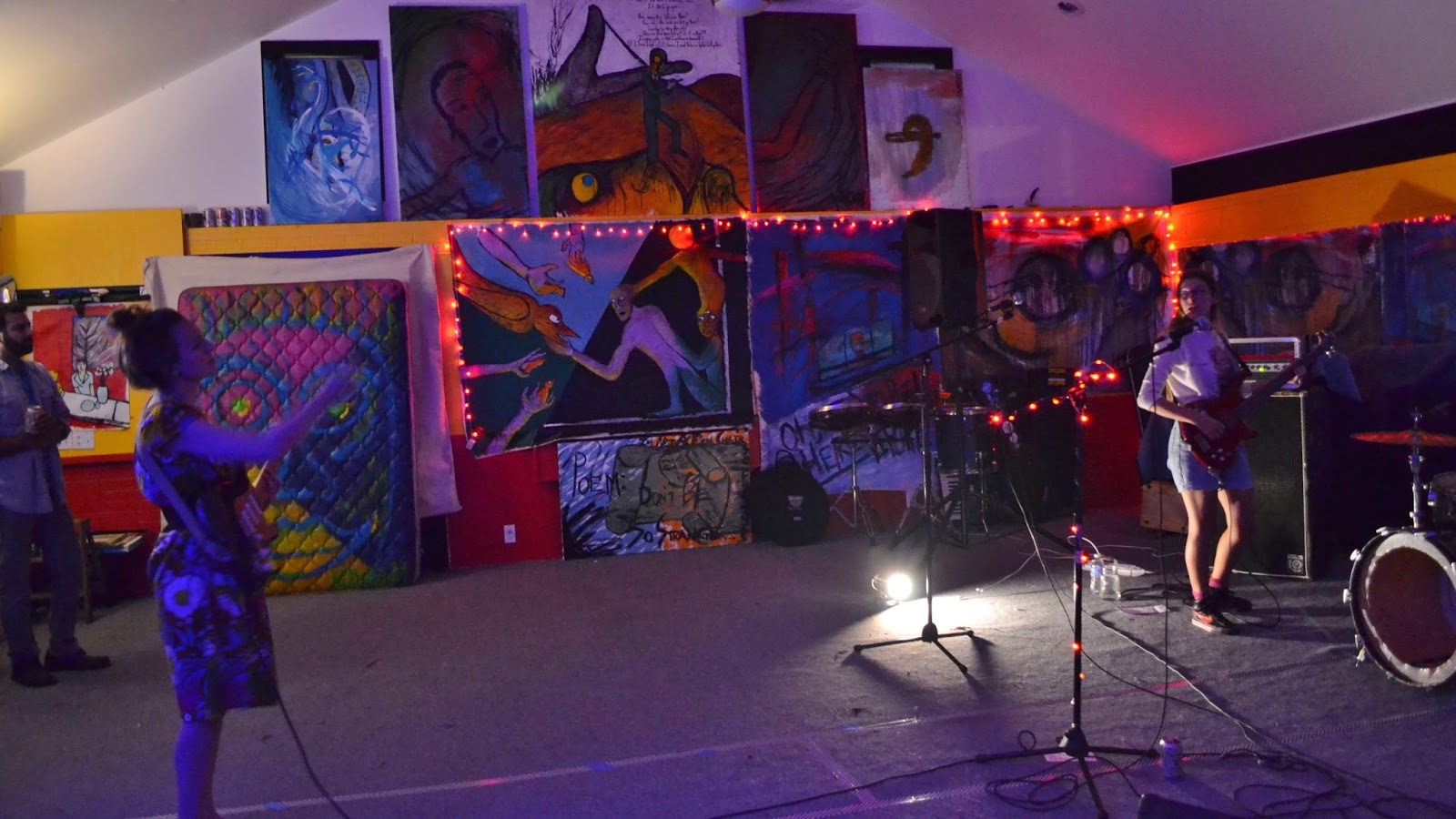 Silent Lunch kicked in first with their three-piece old school punk.  Singer Emily O'Sullivan's aggressive warble is arresting, and you're a little afraid of her as she screams "You're DEAD MEAT" in the revenge tune from their debut EP, Late To Bloom.  But while they definitely harbor an affinity to SST/K Records punk/indie catalog, there are little melancholy melodies buried in the noise, and some nice surfy guitar and harmonies (of course, there were with those bands, too).  I'd say Silent Lunch is coming along quite nicely. 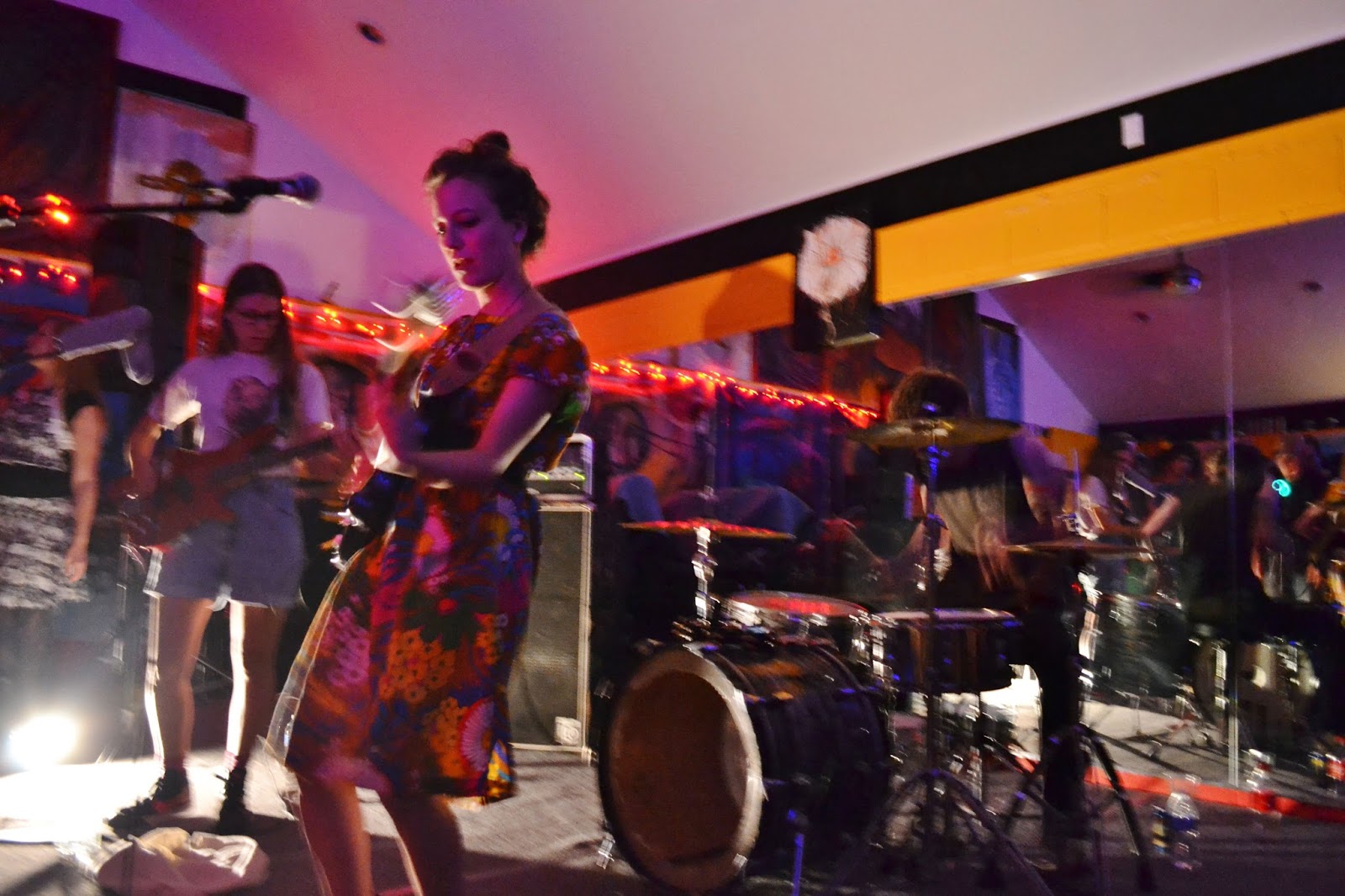 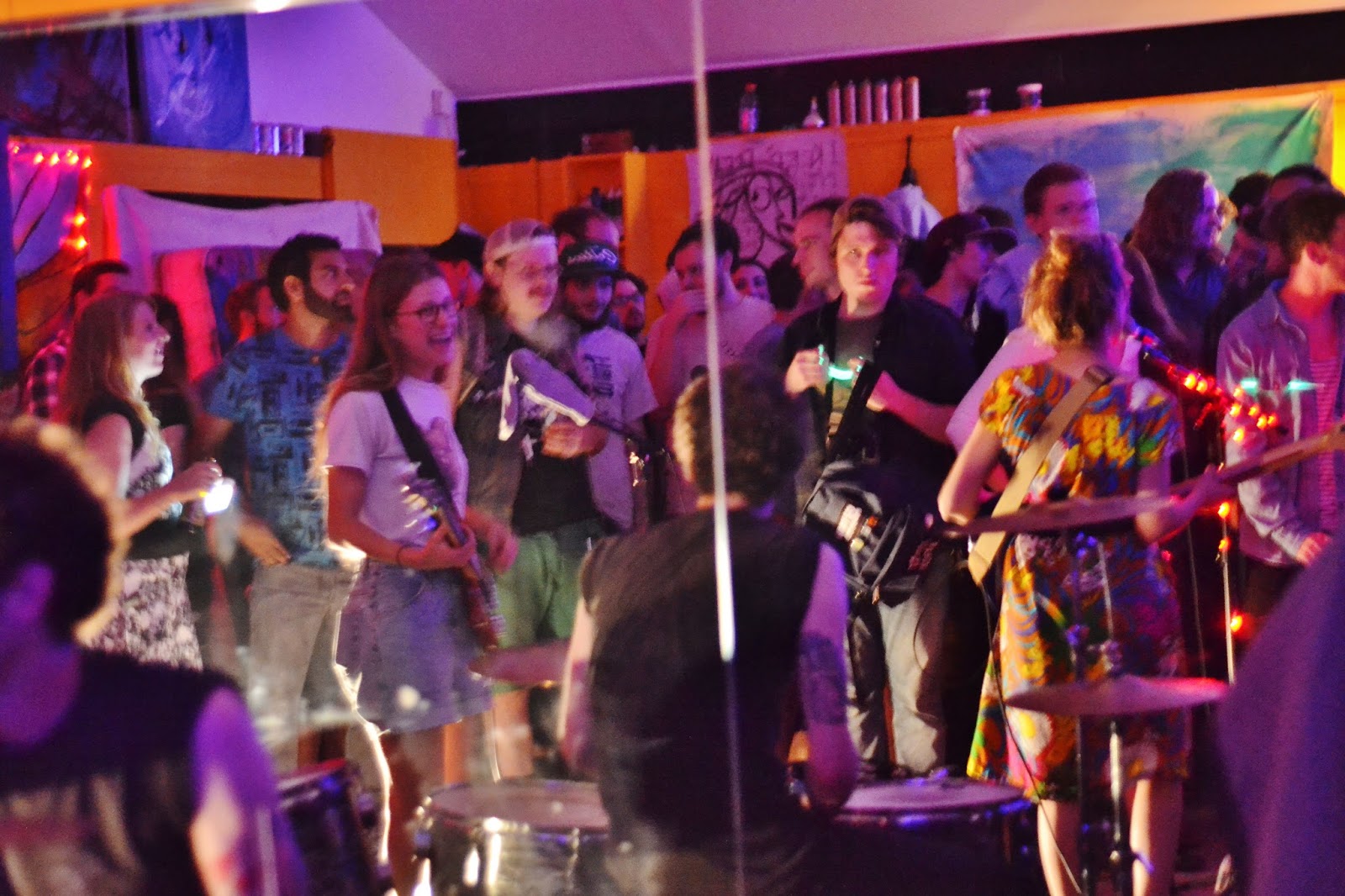 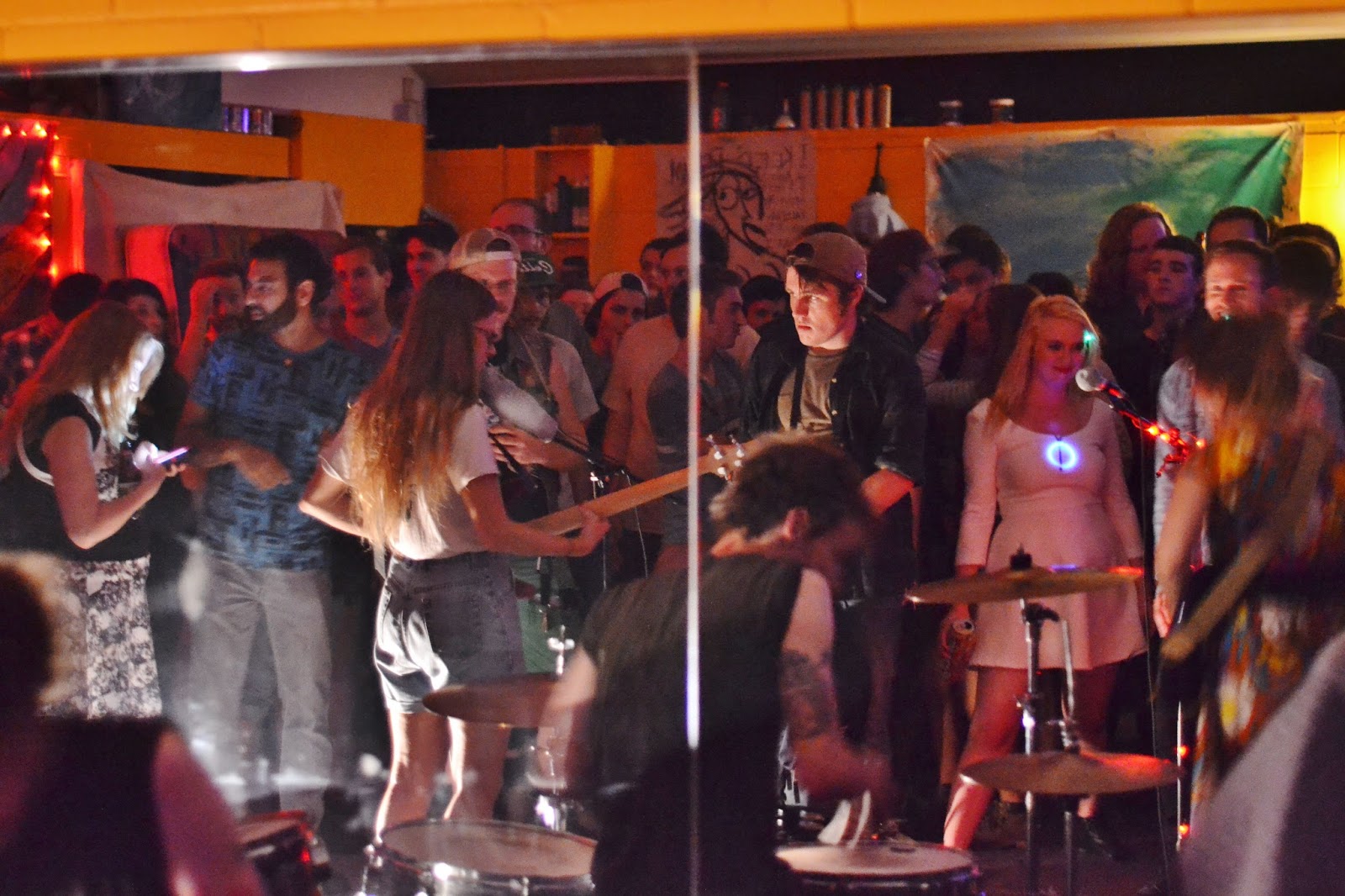 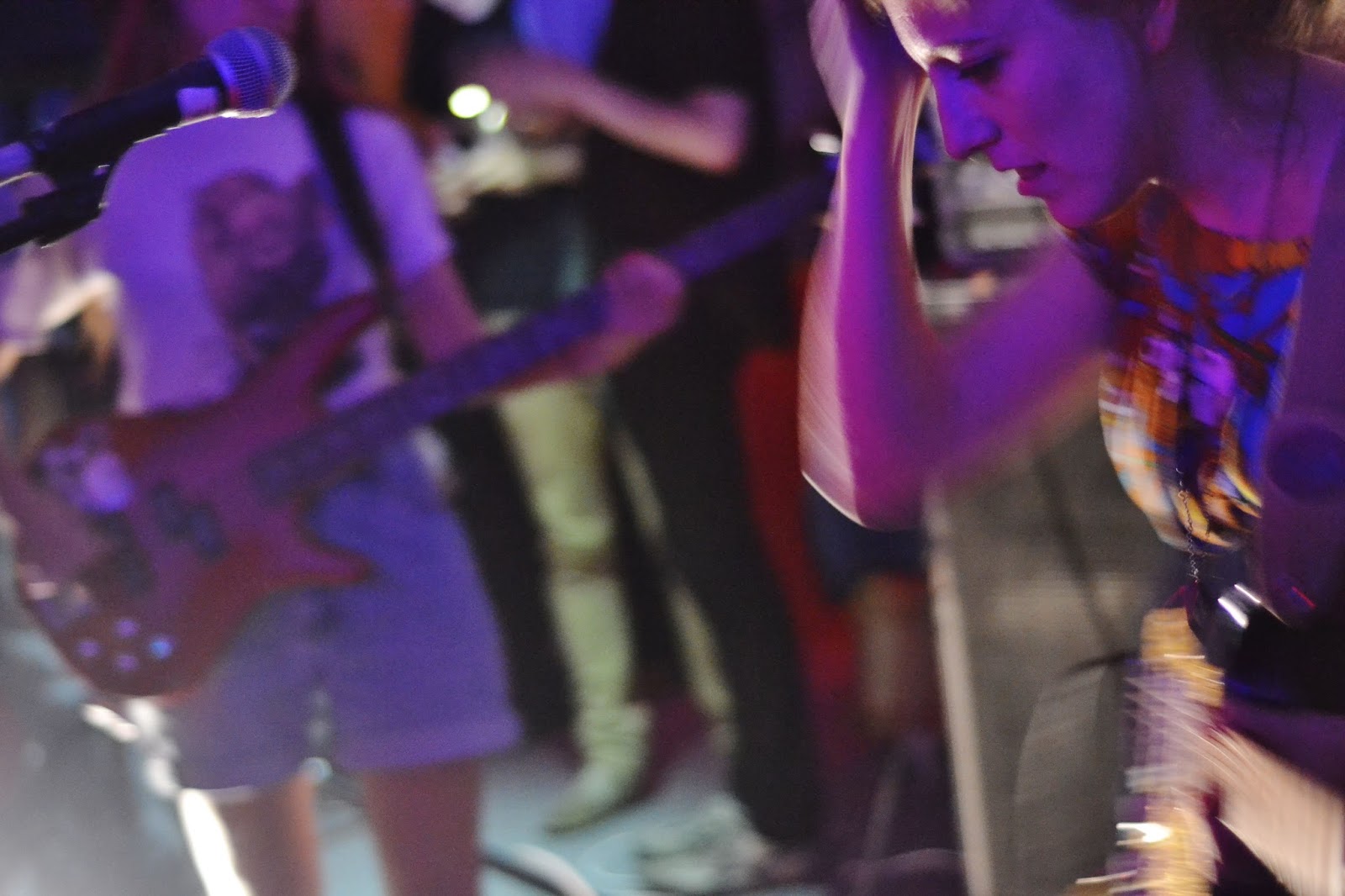 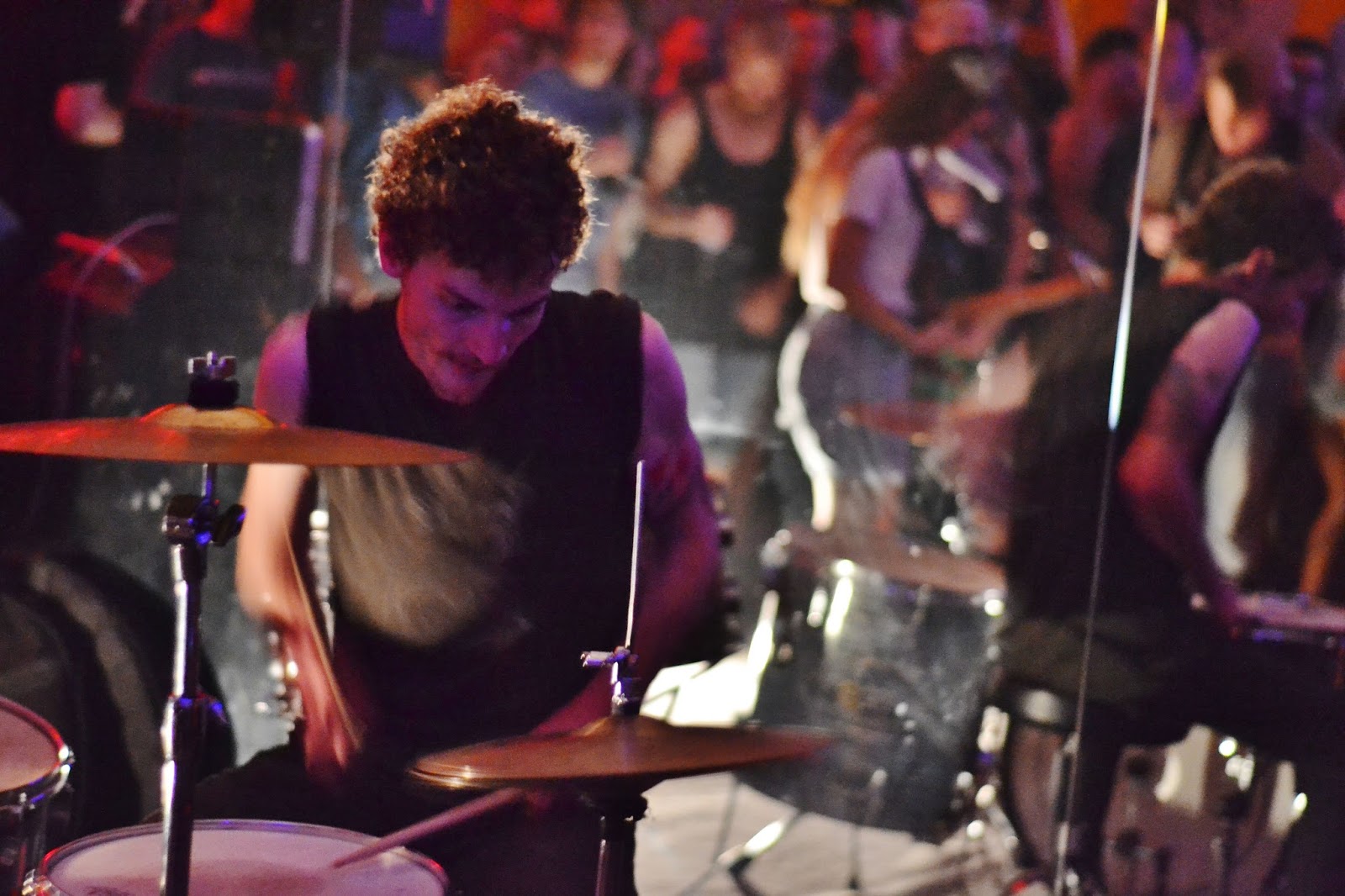 Now, Alex G, I hadn't yet listened to.  But hearing how he was this up-and-coming wunderkind, I checked out his new album, DSU, on bandcamp.  I really, really like the sound of this Alex Giannascoli from Philly.  He writes a great song, and while I haven't listened a whole lot yet, I know I'll be doing so in the future.  I've got as lot of catching up to do... he's already put out 6 albums and he's barely out of his teens.  I love the down-beat, off-kilter melodies.  I hear some Big Star, Built to Spill, Brian Wilson... all the good "B" stuff.  A little Elliott Smith, too.  What sounds on the surface like pretty stripped down instrumentation is layered with all kinds of unexpected twists from piano, banjo, bells, strings, and other assorted tools.  See this band next time they pass through. 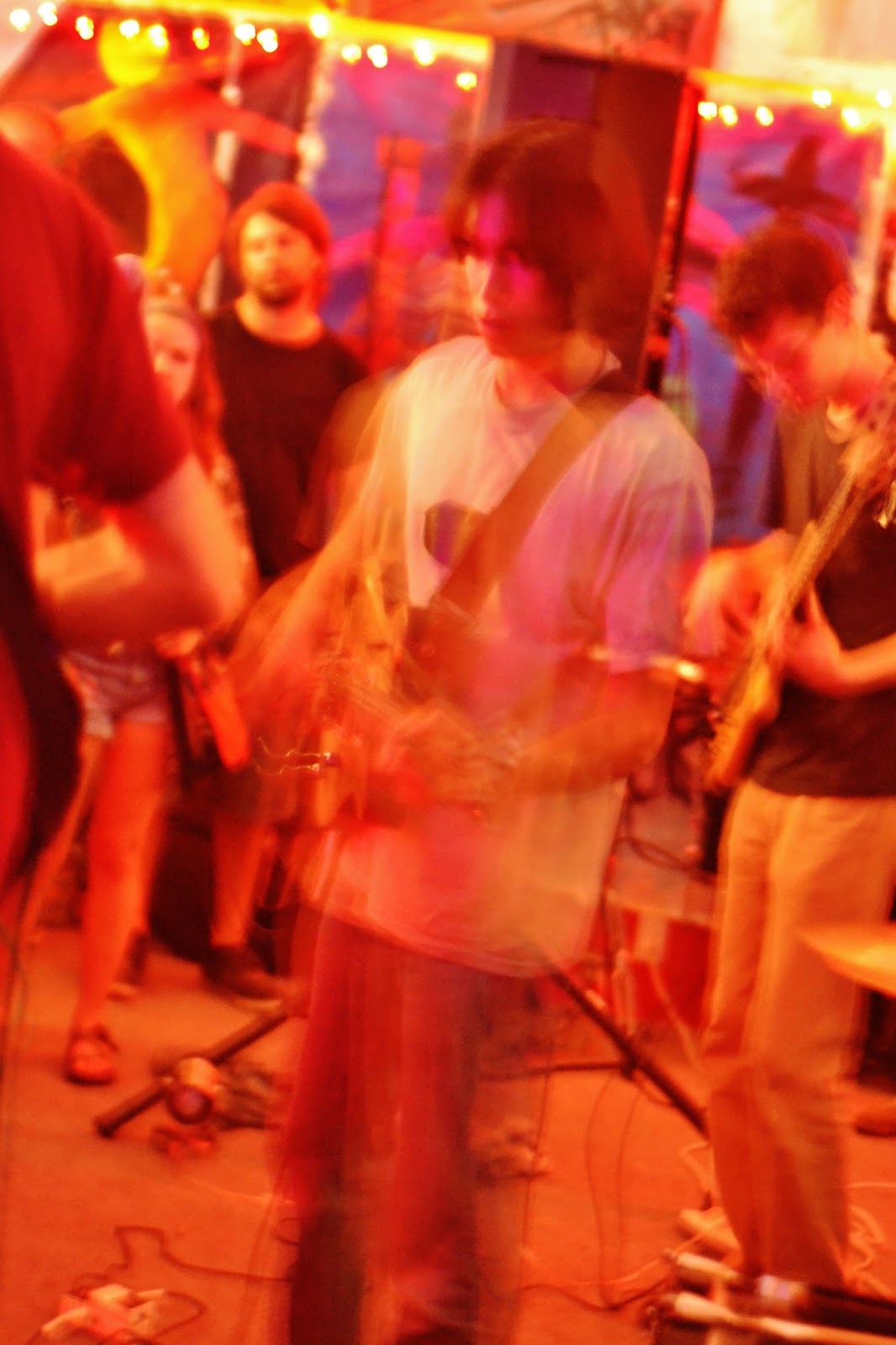 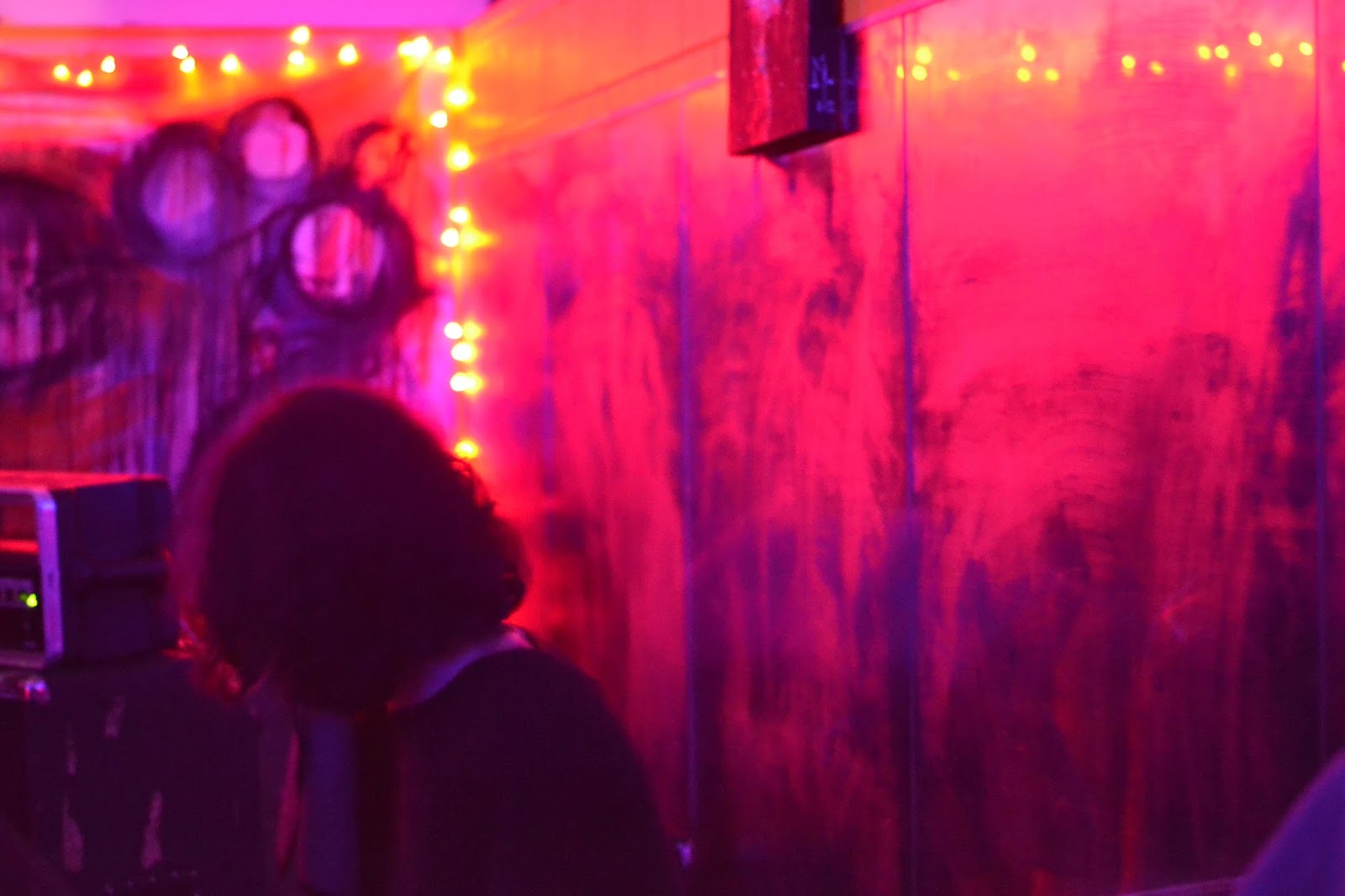 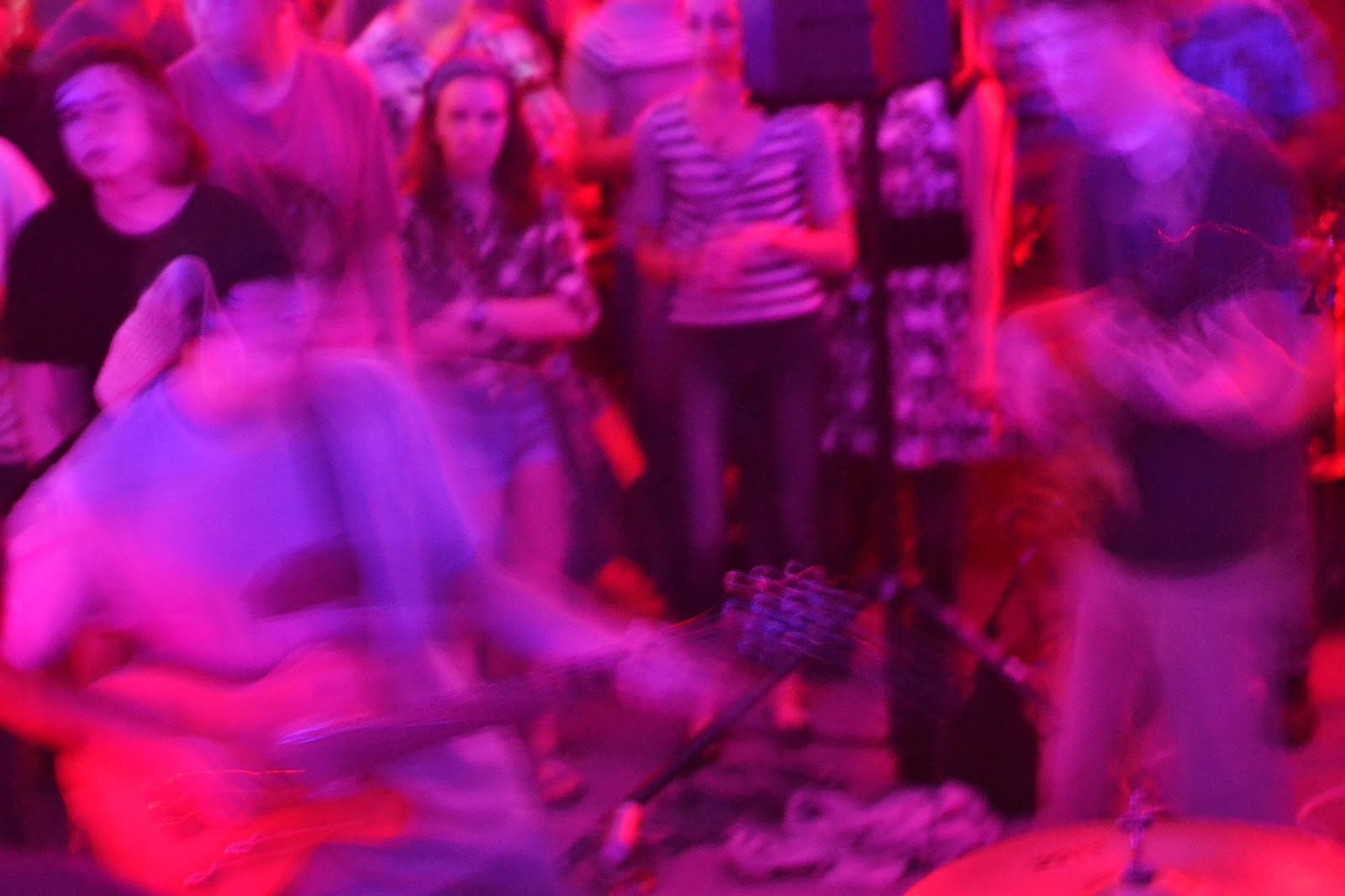 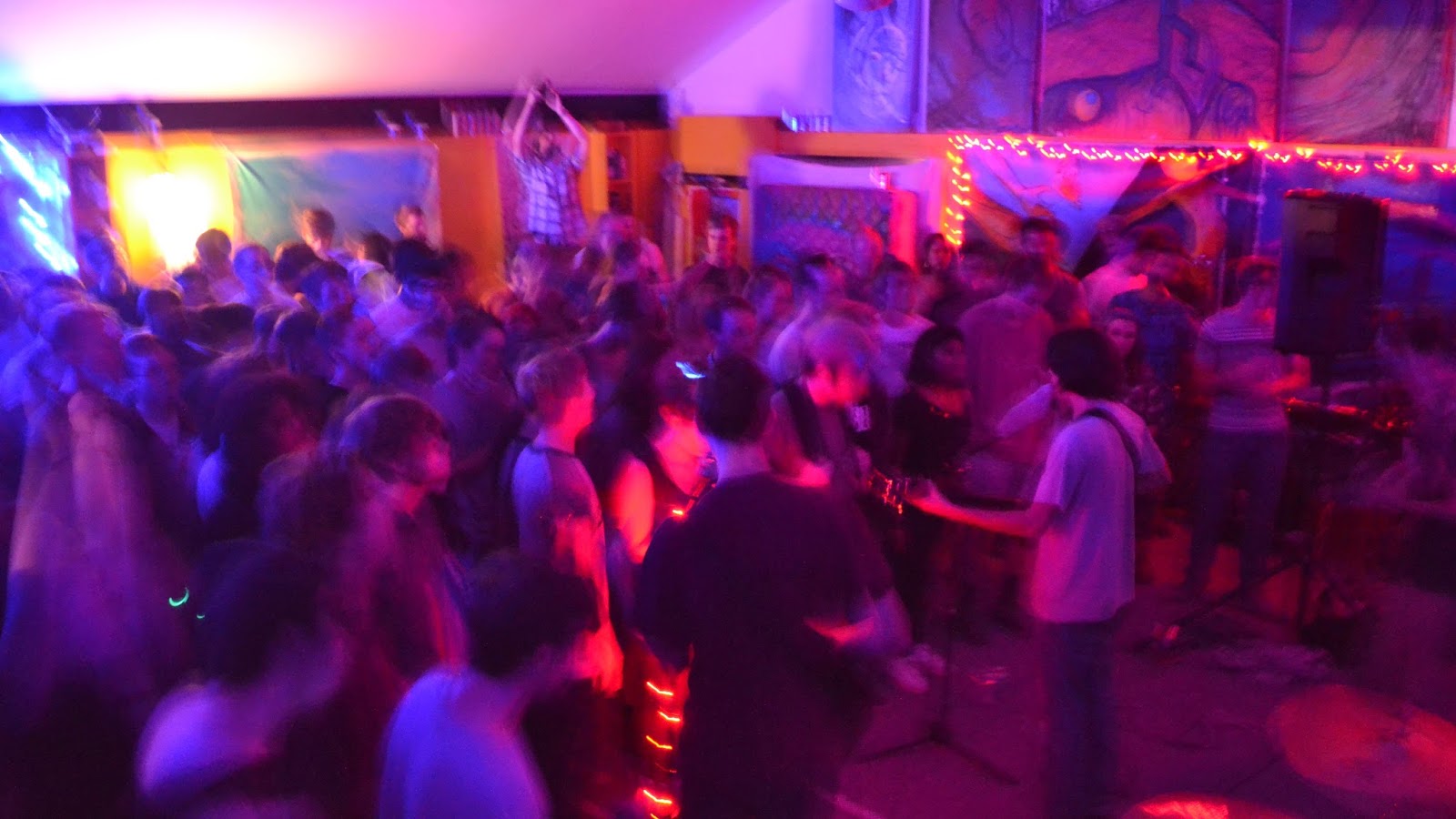 Maybe it was the 100% humidity imparted by the pouring rain outside that, I'm sure, most of us were unaware of.  Maybe it was the sardine can-like environs.  Maybe it was the punk juice flowing from everybody's pores. But it got darker and foggier as the night wore on (okay, maybe Whatever Brains brought a fog machine, but that didn't start 'til their set).  You could track the weather with one look at the mirrored stage backdrop... 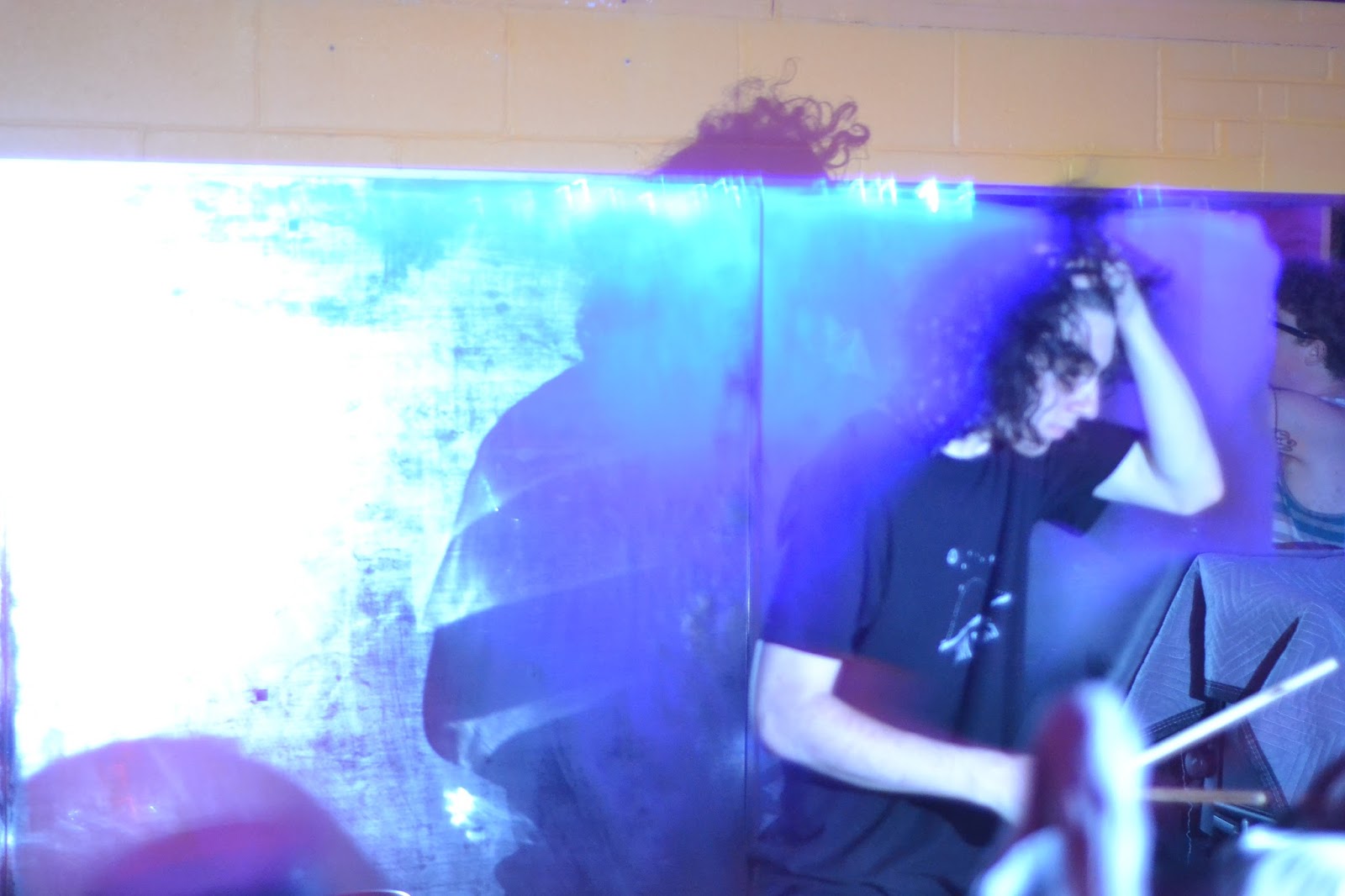 Now, it's hard to describe the sound of Whatever Brains... intense, punk, electronic, techno-on-steroids.  Scary, as the Facebook page for this show had earlier described their sound.  They're truly unique, but I always think of probably the best band out of little Pensacola, Florida, when I used to publish a zine there:  Neutronic.  They had the hammering, punk guitars complemented by screaming vocals and heavy electronics. But Whatever Brains can't be derivative of them; nobody's ever heard of them.  I'm just glad someone has taken up a similar style and taken it beyond, because it's great!  This, my ashamedly only second time seeing them, completely lived up to my expectations from  their Hopscotch set a couple of years back. 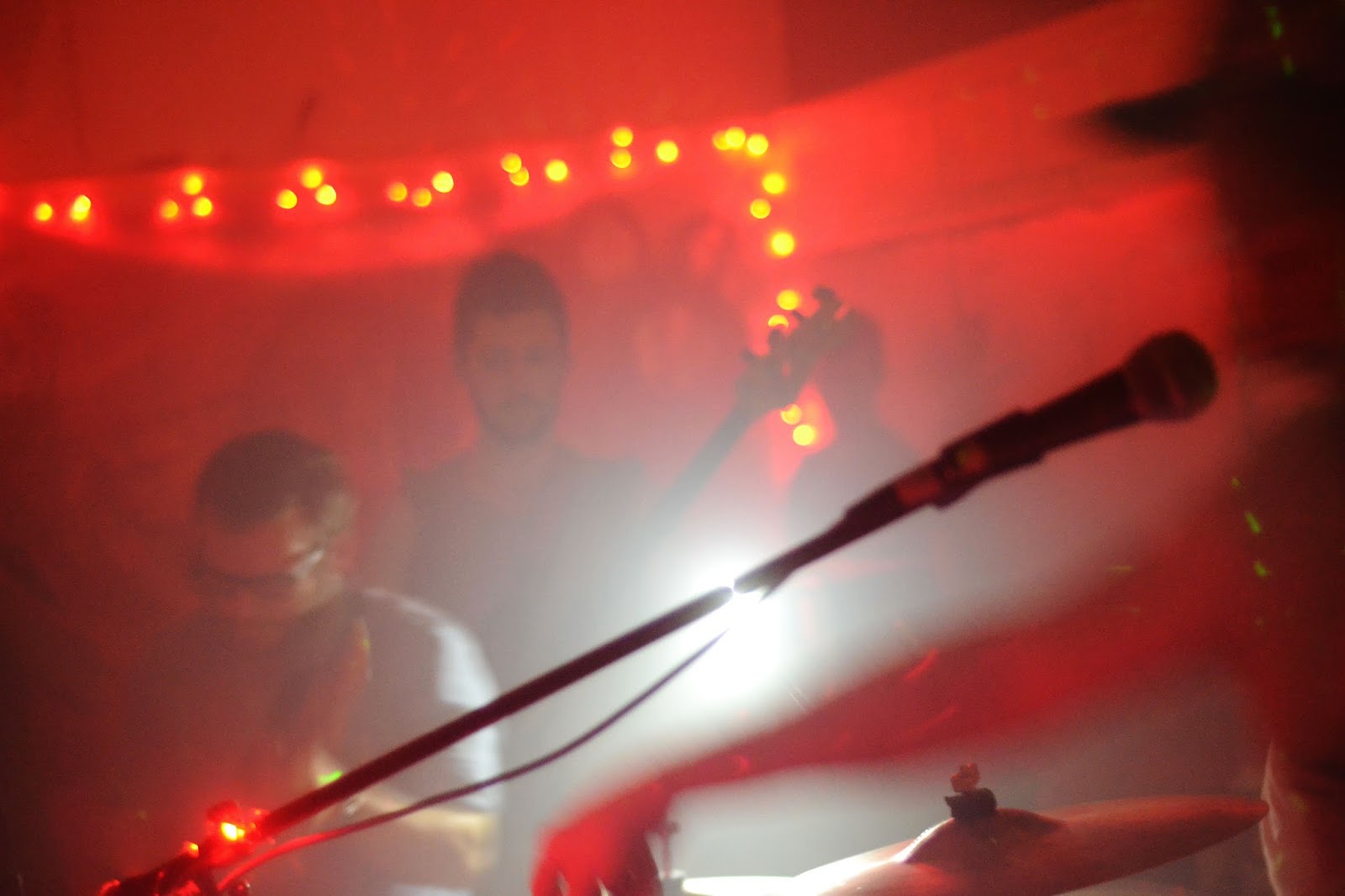 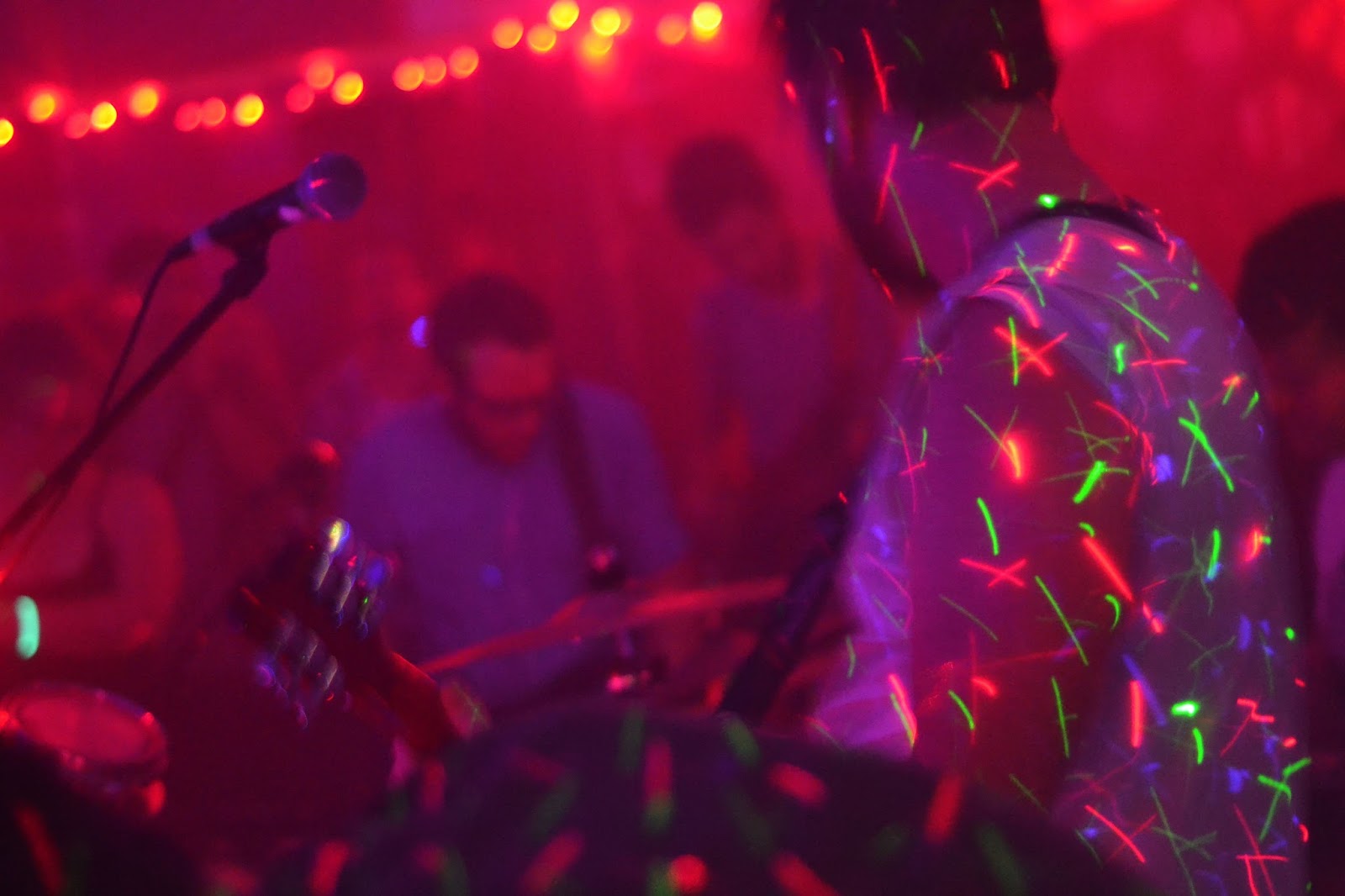 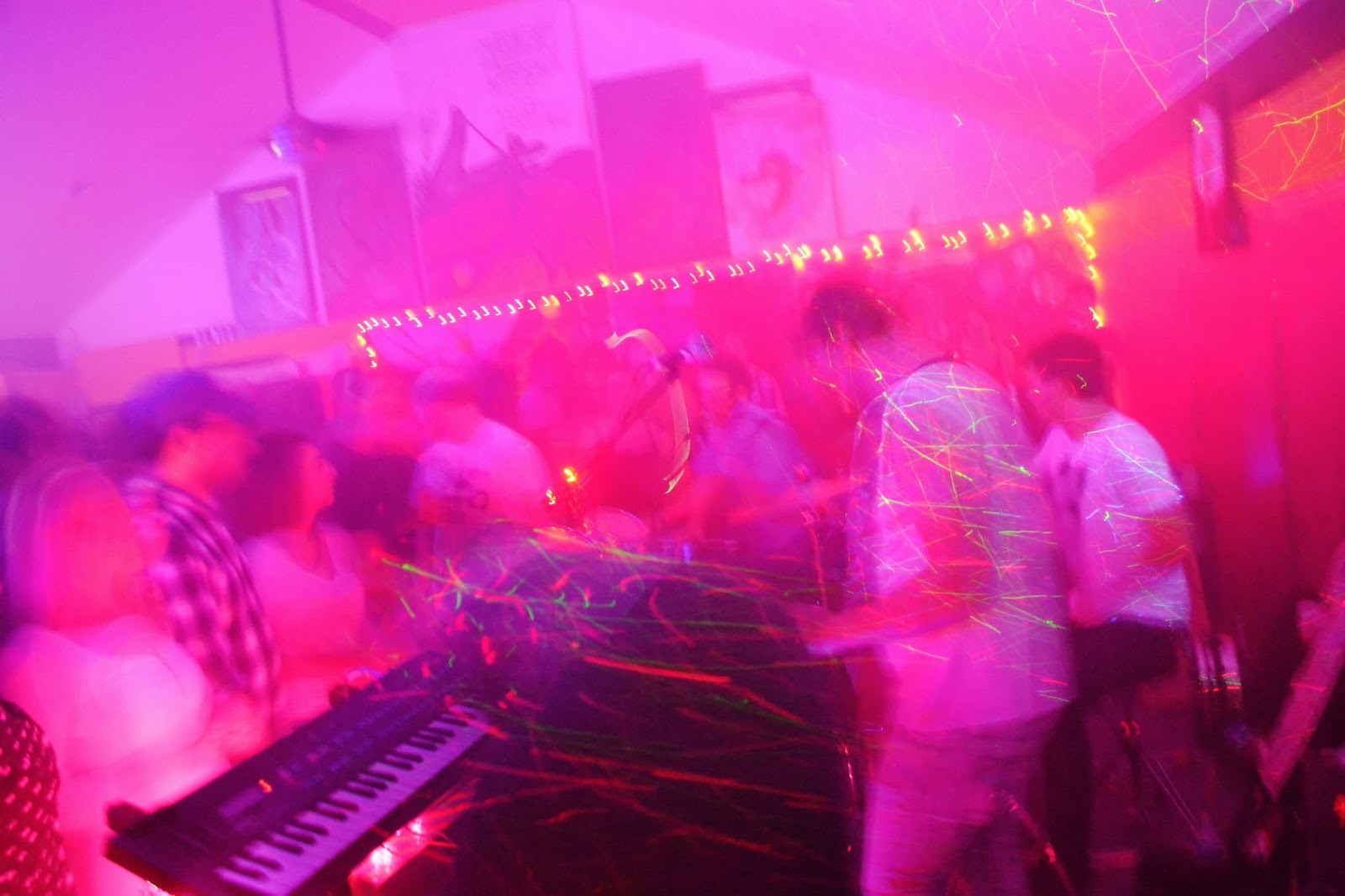 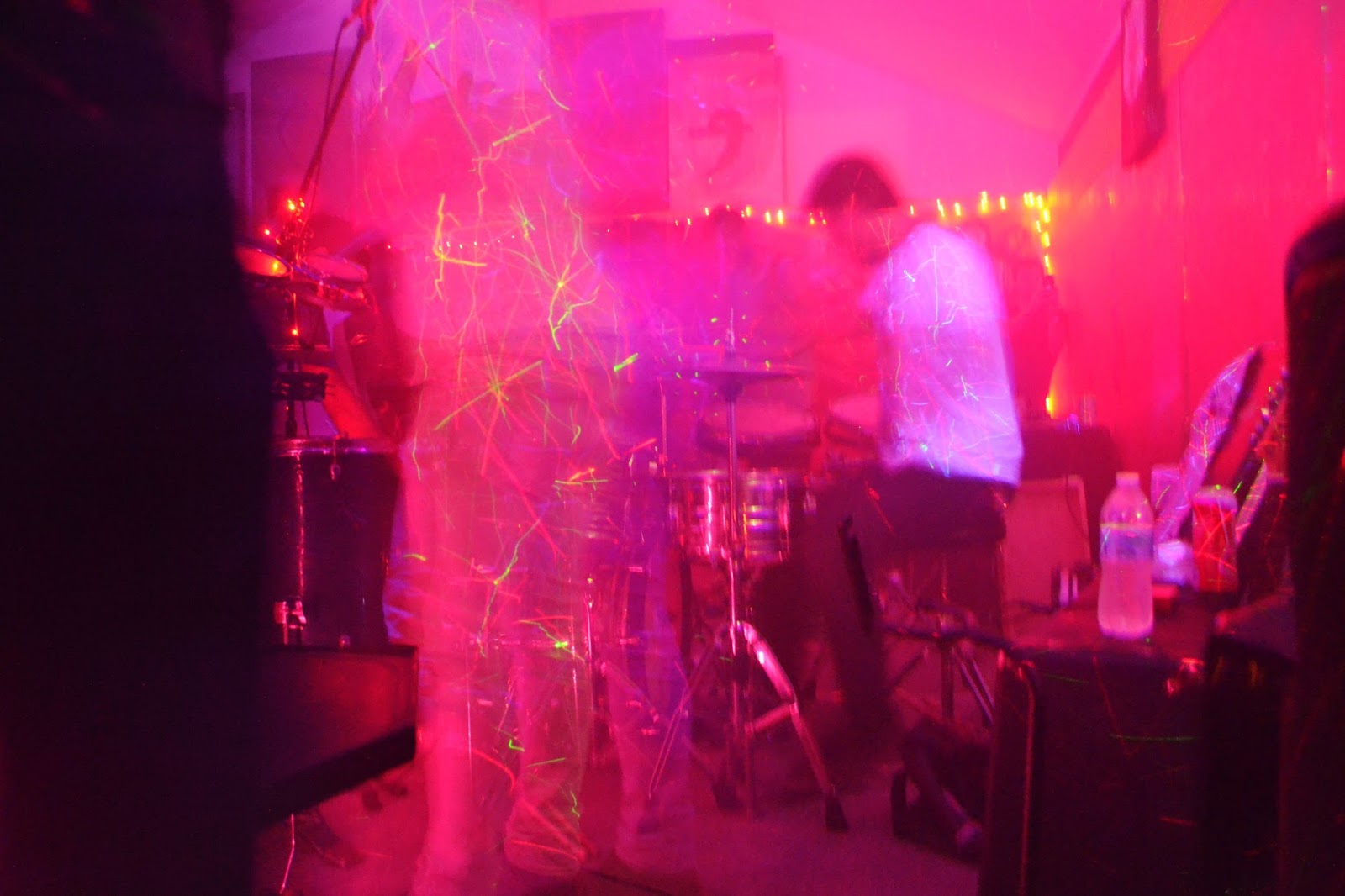 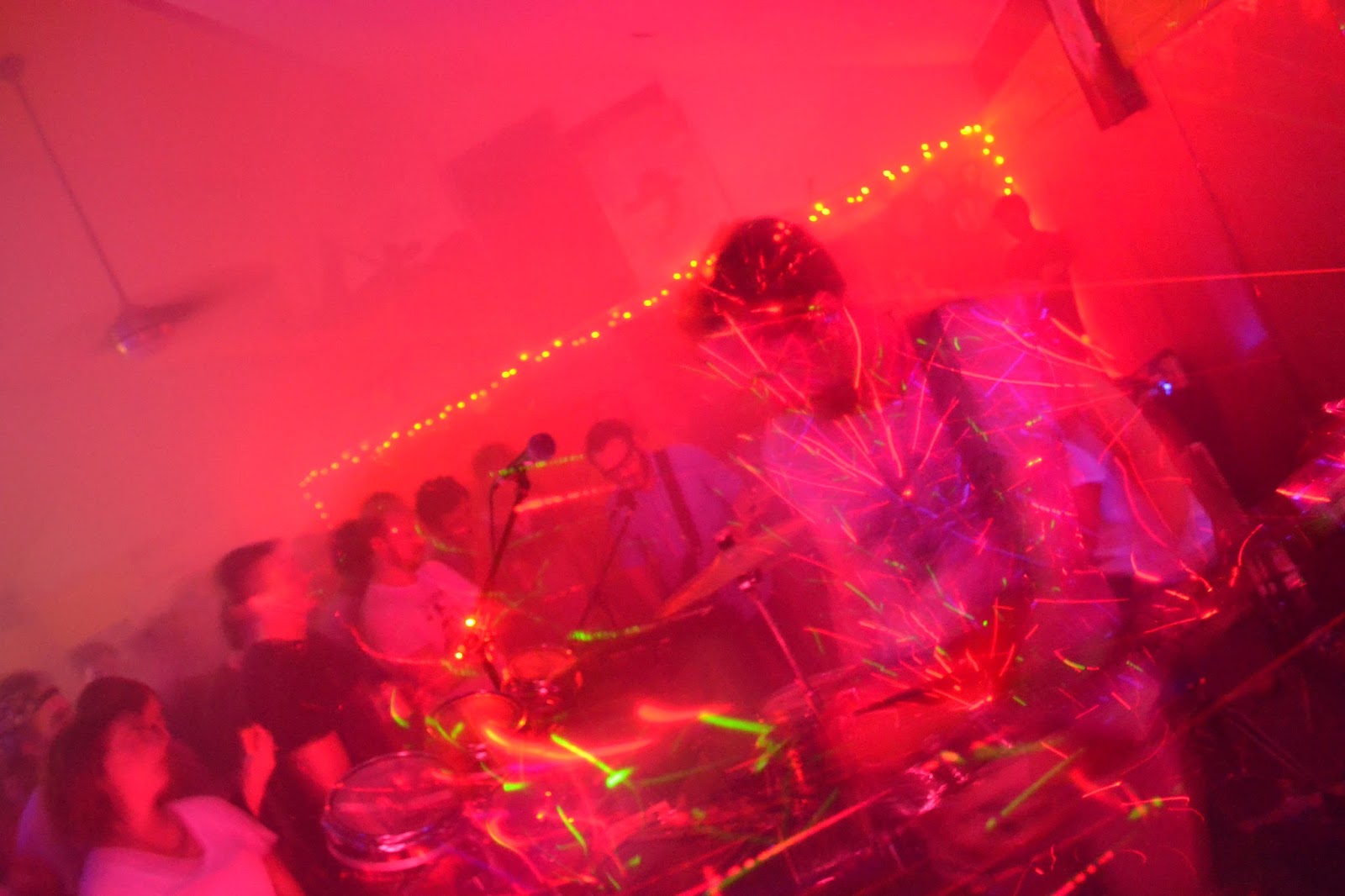 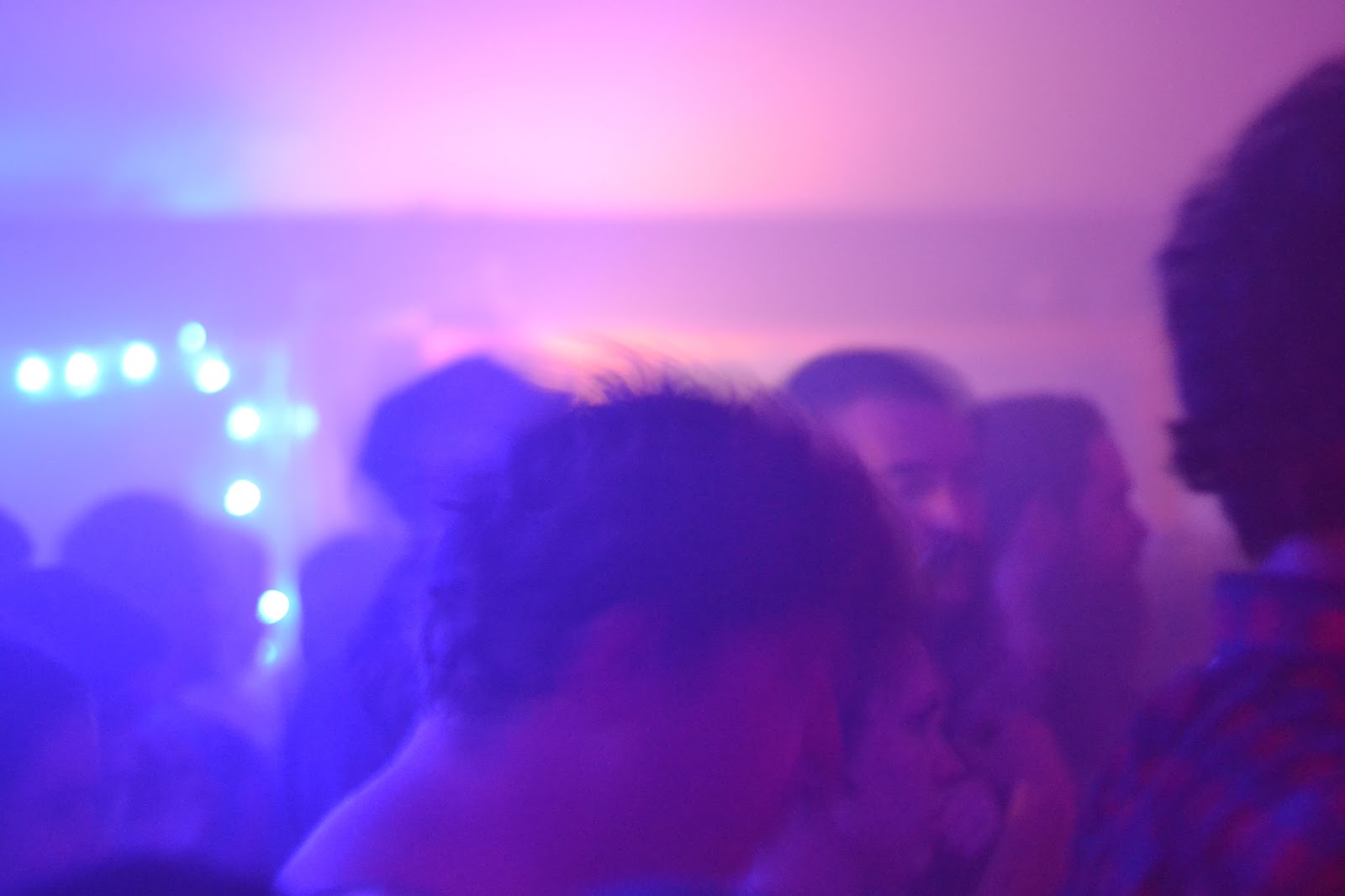 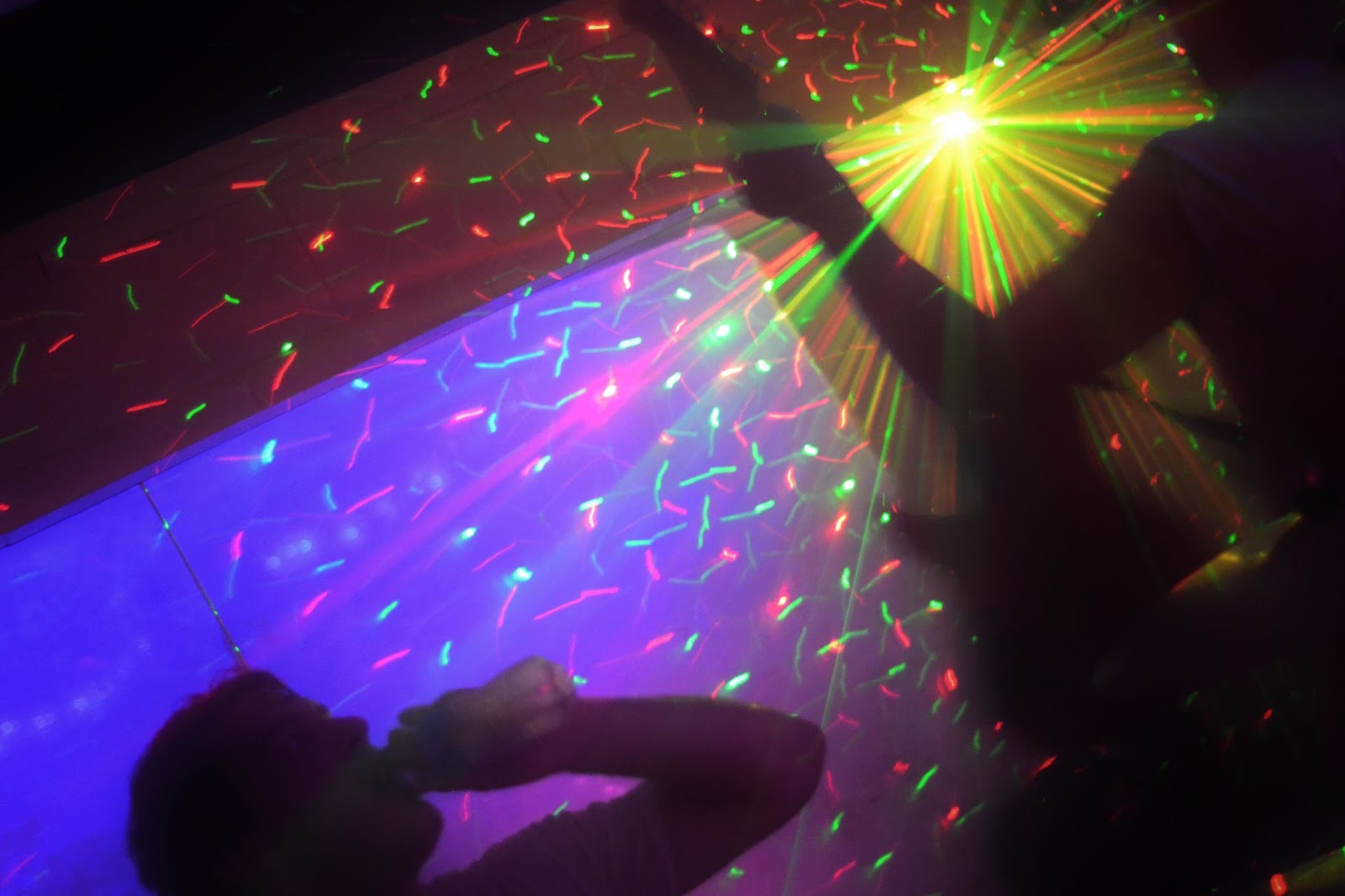 Look on the Facebook page soon for more Whatever Brains photos from this show.  I took way too many of them to post here.  To me, with the light show and fog and darkness, they look like... I don't know... ghosts.  Filled with lightning.

"Ghosts filled with lightning."  Now I think THAT's a pretty good description of what Whatever Brains sounds like.