In Defense of Kooky Small Towns: The New Media and the Rush to Judgement 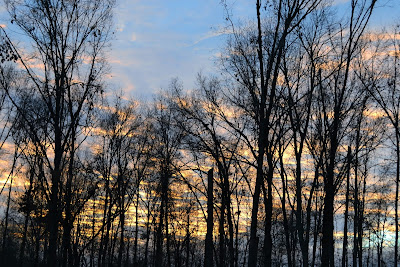 A short time ago, the story circulated of a small North Carolina town, Woodland, and its zany residents.  They refused to allow a solar power farm in their sleepy hamlet between the coast and the piedmont.  Among other complaints expressed by the townies were that the solar panels would cause cancer and would “suck up all the sun’s energy.”

I admit that I too had a laugh at statements which revealed such a stunning lack of scientific knowledge.  Scientific ignorance, and the increasing denial of science (often in the face of mountains of evidence), are issues close to my heart.  The stakes may be no less than a return to a kind of Dark Ages.  By the way, this ignorance and denialism cuts clear across the political spectrum… and even the more educated among us are not immune.

But despite the laughable clickbait, even then, I assumed there was more to this story than the opinions of what were, basically, just two people.  Two kooky residents with backwards ideas on science.  Two residents who were, at least, politically engaged (when was the last time most people reading this spoke at a town council meeting?).

This was a story of loss:  loss of the rural south, loss of a way of life.  Because I can’t put it in any better words than that, I’ll quote from one of several follow-up articles, this one written by David Roberts on Vox:
"It's easy to mock goofy and irrational of fears about solar farms, but they are only an expression of deeper anxieties. The land that Woodland is being asked to rezone is currently zoned residential and agricultural. Rezoning it to allow solar panels amounts to admitting that it's currently going to waste. People aren't going to be living or farming there. The town is not going to grow — not now, not any time soon."

But besides the complex issues specific to this story, this tale also speaks to the wider issue of today’s media and how we ingest, and digest, it.  In today’s instantaneous society, we should all be careful when we get our news from social media, and the web in general.
Briefly, this is how media works these days:


In what can sometimes even be worse than inaction, mini-movements crop up, protests are begun -- action is DEMANDED! -- based on little more than one or two cleverly constructed memes.

This is not to dismiss the value of the internet and social media in calling to light truly important issues and injustices.  Unjustified killings of unarmed (mostly minority) citizens by law enforcement has been an all-too-common occurrence.  But it probably wouldn’t be an issue discussed much outside of inner city community organizations were it not for the prevalence of cell-phone videos and repeated postings of them online.  However, this is a case where time and further investigation revealed a troubling pattern.

And there’s the rub.  Time.  In the speed-of-light world we now live in, anyone can post anything, anyone can say anything, and it’s instantly available to everyone.  That’s great in many ways.  It allows for many voices to enter the discourse.  It equals the playing field.  But there’s no filter save what we each choose to put in place ourselves; and that filter is all-too-often colored by our preconceptions.

When a news story crops up, an informed populace has always had a responsibility to read objectively, to verify, to seek out other sources, to get the bigger picture.  We have seldom ever taken enough time to do so.  But even less so now, so overwhelming is the tsunami of information that scrolls across our screens with every refresh.

Occasionally, as in this case, the new media does its (vague, undefined) job.  Follow-up stories and opinions -- not all the same -- crop up over the interminable time-course of (gasp!) days.  If you’re patient, you start to get a more complete picture than what the original story/meme presented.  It’s piecemeal journalism, sure, but don’t blame the messengers.  The egalitarian information buffet will give us a lot of choices.  But the job isn’t over.  We have to take it further.

As it has always been (even when there were just three corporate-controlled networks), our job as to gather all the pieces and form a coherent opinion.  Our job isn’t to simply ingest the first bite and move onto the next course.  That’s not a job. That’s simply consuming.

No, North Carolina is not some backwoods derelict inhabited by technophobes.  North Carolina actually ranks fourth in the nation for solar energy (there are three solar farms already in Woodland).  No, 10,000 terrorist immigrants didn’t just come ashore in New Orleans.  Fourteen have, over the entire year.  Families with children, being aided by Christian charities.

Despite the speed at which information comes our way these days, we all need to slow down, wait a few of what passes for news cycles these days, and form opinions with more reason and information.  Just because information now moves at lightning speed doesn’t means our judgement has to as well. 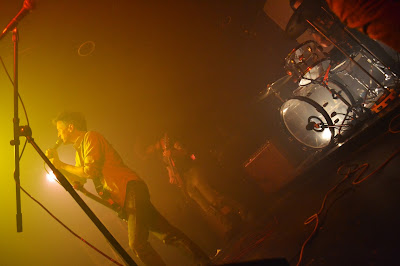 Mac McCaughan's new album, Non-Believers, to me sounds closer to his Portastatic catalogue than his Superchunk one.  It's (usually) somewhat mellower, even atmospheric at moments.  Fine by me, as I've been a fan of Portastatic almost as much as 'Chunk over the years.

But knowing his backing band are the members of primordial garage rockers Flesh Wounds, I was curious how they would manage to, well, frankly... rein themselves in.  Flesh Wounds as a band simply explodes on stage.  That kind of energy could simply swamp McCaughan's finely crafted pop tunes.

Short answer:  they do just fine.  And so does Mac.  Restraint by good players really goes a long way, and can be as important as balls-to-the-wall punk. They played 2 sets, the first of which was mostly stuff from the new album, and a few Portastatic tunes.  I LOVED the amped up version of Angels of Sleep.  The second set was, I think, mostly covers (Iggy Pop, Tall Dwarves, Superchunk... would that count as a cover?).  It gave them all a chance to cut loose a little more, and Mac was clearly having fun with the covers. Dan McGee from Spider Bags got up to sing along on one tune.

Speaking of balls-to-the-wall, openers Blackball (from Raleigh, NC & Richmond, VA) brought the primal energy.  Their singer Ericka screams vocals as if her lungs were twice their size... she is pure id.  Intense hardcore from a very tight band.

Some photos, and a couple of videos of Mac's band, follow (yeah yeah another version of Slack Motherfucker).  As you can see, fog machine was stuck in overdrive. 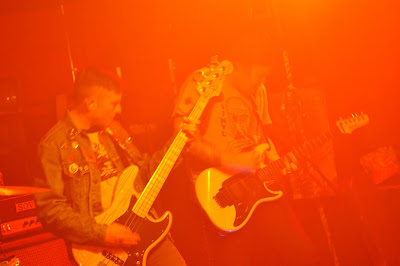 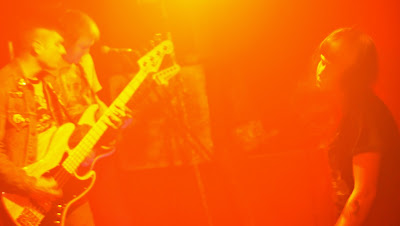 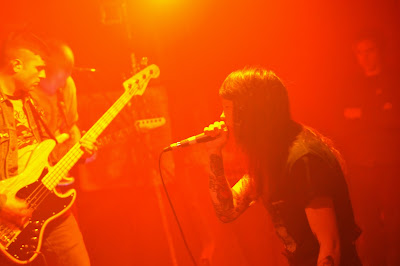 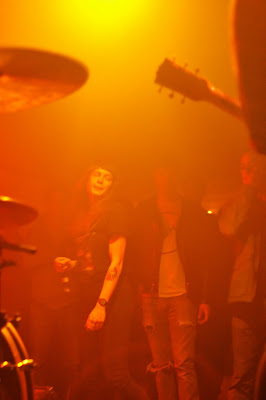 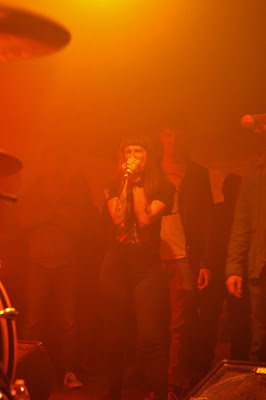 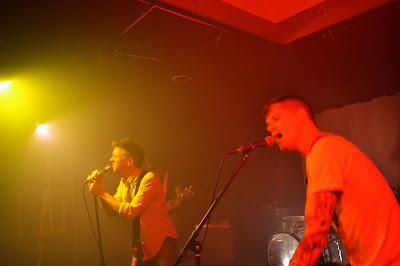 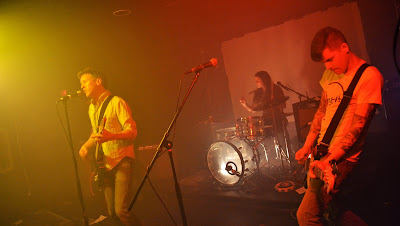 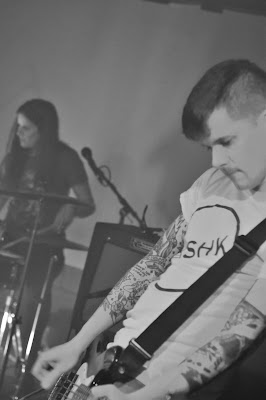 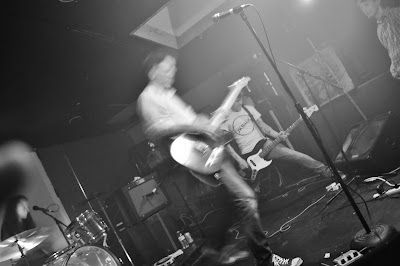 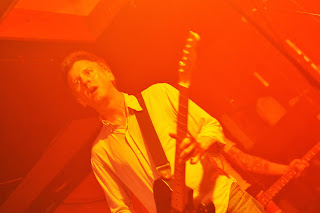 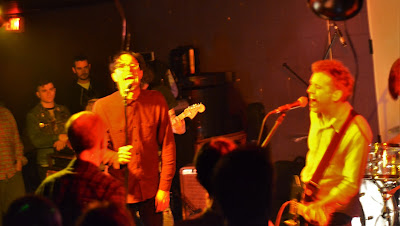 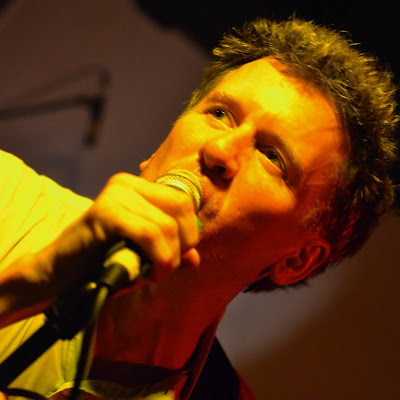 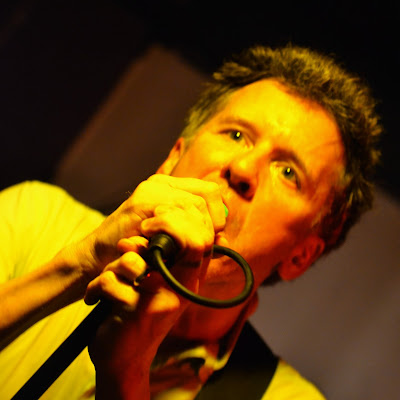