Take a Deep Breath: Dallas, #BlackLivesMatter, and the Culture of "Us vs. Them" 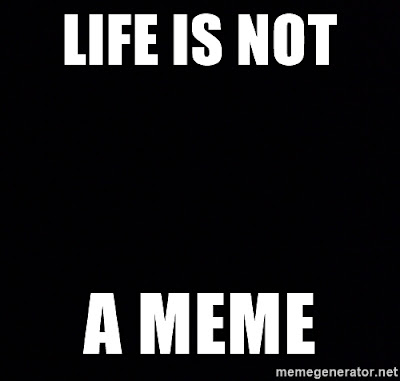 Yesterday morning, on my personal Facebook page, I posted “Folks, the hyperbole has got to stop. This is what it leads to.”  I posted it along with an article about Trump supporters calling for Hillary Clinton’s death at a Trump rally.  That post was not so subtly aimed at the far right, who have been exaggerating Clinton's perceived negatives to claim she is, basically, evil incarnate.  I’ve seen some ridiculous memes and articles coming from the right in recent months, and this was the inevitable result.  This kind of demonization could lead to her assassination, and possibly even violence on a larger scale.

But it was also directed, in part at least, at the rest of us.  Social media and the quick/clever meme lend themselves to broad generalizations, to the demonization of “other.”  They lead to cherry-picking, false equivalencies, and many arguments which sound good, but in fact are rife with logical fallacies.  Our current ratings-driven “news” media doesn’t help matters.

This morning, as I absorb the shocking news that five police officers were killed last night in Dallas, I’m thinking of that post again.  I didn’t expound upon the idea as much yesterday.  But a few yahoos spouting inflammatory rhetoric at a rally pale in comparison to the events of last night.  And what applies to one must apply to all.

Let me say first that I’m in very strong agreement with the ideas and goals of the #blacklivesmatter movement.  I was horrified by the videos in the past few days of shootings of black men by police, as I have been by every one of these “isolated incidents” that have been occurring all-too-frequently.  I think saying #alllivesmatter is an insult to those presenting the #blacklivesmatter idea, and to minorities in general.  It blatantly dismisses what is an obvious societal problem.  This idea is, frankly, so self-evident that you wouldn’t think would require further explanation.  But here goes:  “Black lives matter… TOO.”  Of course we all know that all lives matter, and that police lives matter.  But the problem is the disproportionate aggressive treatment of African Americans by police relative to other ethnic groups.  This reveals that, perhaps, society doesn’t think black lives matter AS MUCH.

You also wouldn’t think this required elucidation, but pointing out there is a problem with disproportionate use of force against minorities by police is NOT mutually exclusive with the belief (which I also hold) that the vast majority of men and women in blue are hard-working, honest civil servants willing to put their lives on the line to keep us all safe.

But back to my post from yesterday, then about Trump rallies.  “The hyperbole has got to stop. This is what it leads to.”

After the horrific events in Dallas last night and my unrelated post from yesterday, I find myself thinking about the many times in the recent past when I’ve consciously worried about the tone of some comments I've heard, in this case, from the left.  These comments have come from people who are (justifiably) frustrated and angry at horrific incidents in which fathers, sons, CHILDREN, have been (unjustifiably) killed… murdered by the very people meant to protect them.

But with a depressingly increasing frequency, I’ve heard people portray police as “the enemy”, speaking as though a revolution were in the making… people using broad generalizations and demonization.   I have wondered to myself, “Is that where we want to go?  Will that improve anything at all?  Or will it simply result in more escalation, more justification for police abuse of power, militarization, and overreach?”

I am not at all saying that the vast majority of people aligned with the goals of the #blacklivesmatter movement (among which I consider myself, albeit one of white priviledge) are anything but honest citizen activists, true Americans, trying to foster peaceful change on an issue which leaves us all very frustrated, angry, and sad.  I must stop here to make the point that this applies to every one of the people engaging in peaceful protest at the time of the shootings in Dallas last night.  These protesters were engaging in their rights as American citizens, peacefully, in a way we should ALL be able to appreciate.  They are not, nor is the movement in general, remotely to blame for the actions of a crazed, extreme few.

But what I am saying is that language (by some), while out of understandable anger and frustration, should not go so far as to resort to broad generalizations and demonization of ANY large, diverse group of people as “other” or “the enemy.”  This can only encourage extremists who want nothing short of open warfare, as the shooter or shooters last night seemed to.  And the exact same thing can be said about Right or Left, Trump haters or Hillary haters, #blacklivesmatter or #alllivesmatter.

The facts bear out that minorities, particularly African Americans, are disproportionate targets of police brutality and shootings.  That is something that this has got to stop.  I believe the problems are systemic, but also deeply complicated.  They will take much more than pointing the camera at individual incidents of unjustified shootings to solve (although that’s a start).  Making progress on these issues will require a change in the culture of police departments (see this police officer’s emotional thoughts on the issue).  It will require a focused attempt at improving training in community policing, conflict resolution, and de-escalation (ironically, issues that the Dallas Police Department has been aggressively addressing, and with some success).

Protest peacefully.  Keep the heat on, most certainly.  It is a good sign that the Justice Department was called in immediately on the Sterling case, and got involved in Ferguson.  Walter Scott’s killer in South Carolina faces both murder and civil rights charges.  Progress often comes too slowly, but it comes nonetheless, and thanks largely to the peaceful protest movements like #blacklivesmatter.

But fostering change on these issues, on ANY issues, will not be helped by generalizing and demonizing the “other” as “the enemy.”  Everyone should take as much time today to mourn the five officers shot as they have for Alton Sterling, or Philando Castile, or Freddie Gray, or Tamir Rice.  And everyone… I was going to say “on all sides,” but really there should BE no sides here, it’s sad all around.  So everyone -- all of us, EVERY AMERICAN -- should stop and take a deep breath, and think about ways to HEAL.  Think about what police go through on a daily basis.  Think about what young black males experience on the street every day.  Greet a police officer when you see one.  Talk to people with different beliefs, in different socioeconomic situations.  THINK about ways to foster peaceful change where you believe it is needed. 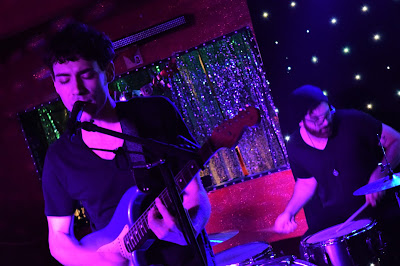 Every once in a while, a great band hatches fully formed.  That happens more around here than some places, due to the deep pool of talent we’re lucky to have in NC.  In this case, veteran musicians Missy Thangs (Love Language, Birds of Avalon), Ellis Anderson, and Noah Dehmer broke -- apparently not very amicably -- from the band Toddlers and formed No One Mind.  They "hatched" -- live birth -- at downtown Raleigh's new-ish backdoor venue, Ruby Deluxe, a couple of weeks back, and had already recorded their debut LP (out September on Third Uncle).  Missy and Ellis play keys and guitar, respectively, while Dehmer remains a songwriting partner.  The rest of the stage roles are filled by Joel Willis on drums and Sam Logan (Lilac Shadows) on bass.

While Anderson fronts the band, No One Mind (as the name suggests) is an amalgam of its parts.  Just within their recently-released 7-inch, the sound ranges from the heavy, bass-driven pop of Born Again to the psychedelic, synth-laden, Moody Blues-y mini-opus, Baron Gain.  The overall vibe is restlessly brooding, but not too dark.  Live, they’re a bit more upbeat, though still intense and fun.  Keep an eye out; guaranteed to be a good show. 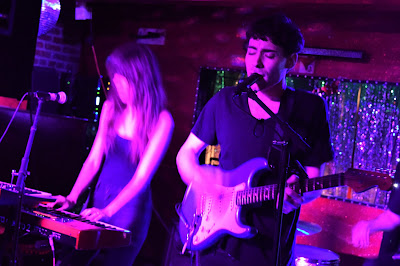 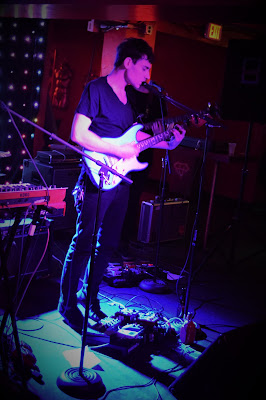 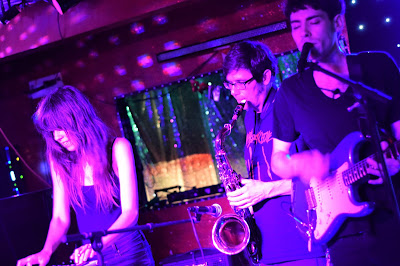 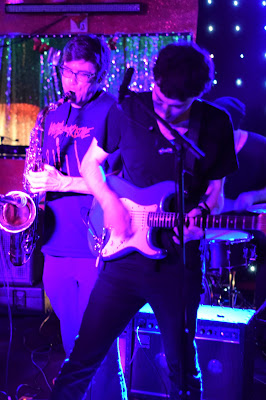 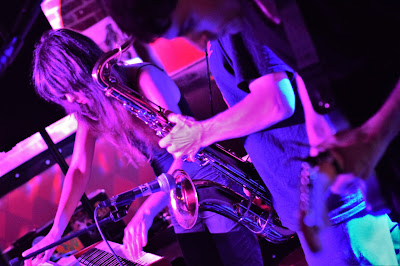