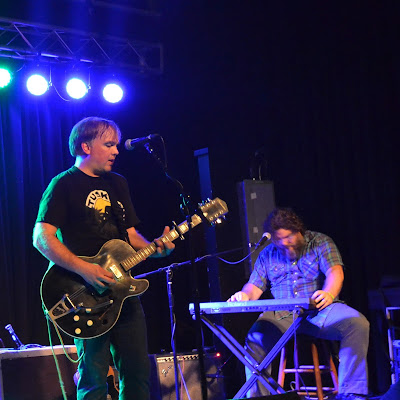 Last weekend, there was yet another Potluck Foundation release show:  to celebrate a split 12" featuring Jphono1 and Lakes&Woods (also playing were Hectorina and the Little Books).  This Triangle collective of like-minded folks just keep'em coming, supporting music of a slew of the better local bands.  As much music as they share with us, they share band-members with each other even more.  Case in point, Jphono1, the formerly-solo alter-ego of North Elementary's John Harrison, plays keys in Lakes&Woods.

Jphono1 has been playing off and on as a solo act for a while, complete with lots of looping and other assorted effects to fill in his sparse, atmospheric songs. The result has been a rather psychedelic, rolling, drone of a sound.  While this single ("Castles")  is similar to that, the full band is just coming into its own.  Heavier and less reliant on effects and more on the usual guitar-bass-drums ethos, providing a different outlet for what are good songs either way. 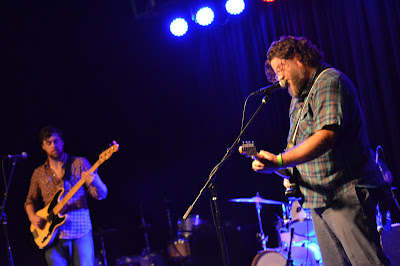 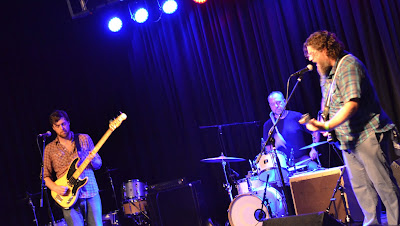 Hectorina are a Charlotte band that I think has been around for a while.  I caught them briefly in Wilmington some time ago, and was a little taken aback at first by a somewhat poppy and schizophrenic sound; are they funky? Are they Animal Collectiv-ites?  Wasn't sure what to think.  On second listen, I gained a greater appreciation.  Maybe if Interpol had more funk and a sense of humor, Hectorina might be the result.  They were sorta mathematical and jazzy, too.  Definitely not like anything in the Triangle. 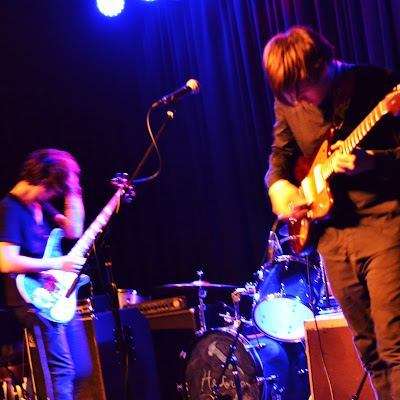 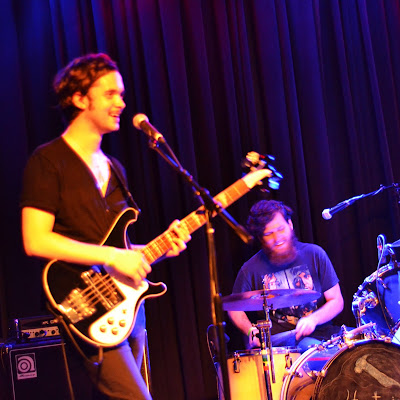 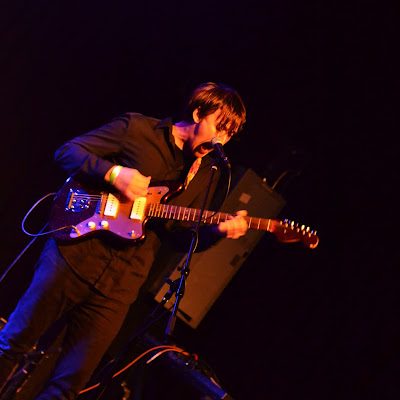 Lakes&Woods have a clean, jangly sound that traces it's lineage back through the Connells, dBs, Big Star, maybe all the way back to the Byrds.  Really, though, front-man and songwriter Matt McMichaels' earlier band, Mayflies USA, were  practically contemporaries with the later bands in that lineage, so he's just continuing to do what he does.  Also not a lot of stuff like this in the Triangle (anymore).  Occasional ukelele & harmonica, and organ from Harrison, provide nice depth to their straight-ahead power-pop songs. 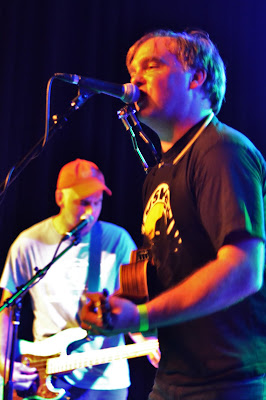 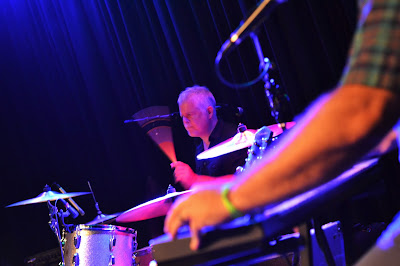 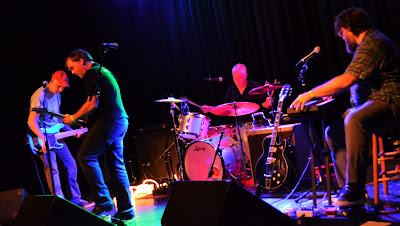 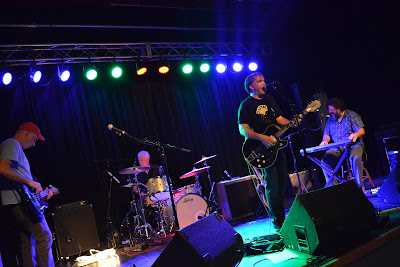 The Little Books were a touring band (from Jacksonville, FL) added to the end of the bill, which made for a very pleasant surprise.  They're just a duo, a fact belied their sound.  Though they would sometimes settle down for a sweet folk number or two, they alternated this with frenetic, punky, K-records-style rippers.  I wonder if they  remember Crowsdell, another Jacksonville band from the late 1990's (or subsequent solo music by that band's frontwoman Shannon Wright).  Little Books kind of reminded me of them... especially on the song "The Cure" (see video below).  Dig up the song "Sugar-Coated", from Dreamette, Crowsdell's debut LP produced by Stephen Malkmus of Pavement.  Nevermind, I've done it for you.  And watch the Little Books video below to the end to see what they do to their equipment when they get carried away.  Also, see the other video below, of Lakes&Woods performing "The Future of the Payphone".

This weekend, there's another Potluck joint going on:  See Gulls' much anticipated EP release show at Kings!  'Course, if you saw the Indy this week, you could not possibly have missed that. 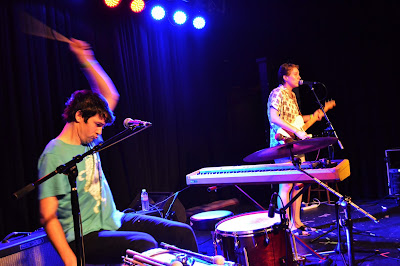 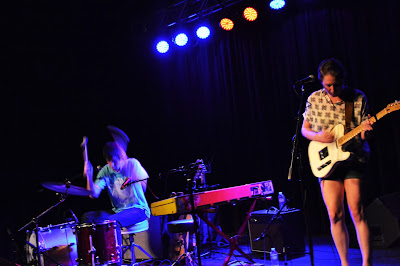 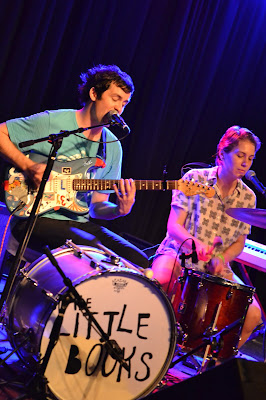 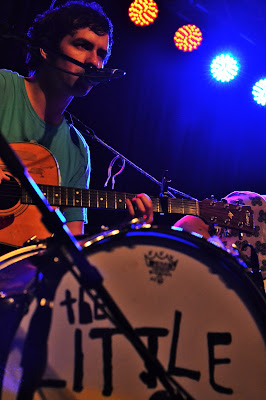 This weekend, there's another Potluck joint going on:  See Gulls' much anticipated EP release show at Kings!  'Course, if you saw the Indy this week, you could not possibly have missed that.

A couple of videos from the show...

So I snuck away from the Jphono1/Lakes&Woods 12"release show at the Cradle Backroom (more on that later) to finally see SOON.  Being a fan of the soaring pop of the Love Language, I was always intrigued to see what a band made half from them (Stu McLamb and drummer Thomas Simpson), and half from vets of local metal bands GROHG (Mark Connor) and Bitter Resolve (Robert Walsh), sounded like.  Short of some old hardcore, my tastes don't usually run metallic, or especially heavy.  But within the 3 songs I managed to catch, SOON won me over.

What stood out from the first song I saw were the multiple vocals... downright operatic (or at least dramatic).  A thunderous kind of melody.  The penultimate cover of Pink Floyd's the Nile Song showcased the vocals even more.  Their last tune (don't know the name) began as a thudding crawl, and was taking so long to build I was wondering when the pay off would come.  Starting very low and slow, teasingly... almost torturously... building gradually, into a long, slow explosion.  But it didn't stop there.  It ramped up to a cathartic barrage of guitar, bass, drums, & voices.  Sometimes ya gotta hold back before the payoff.  Yeah, this one definitely paid off.

I'll have to catch a full set by these guys soon (no pun... well okay, pun intended). 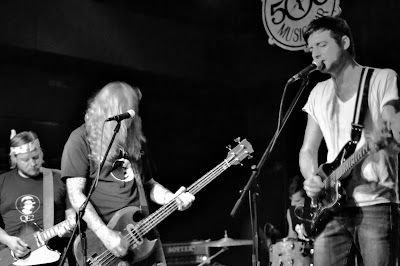 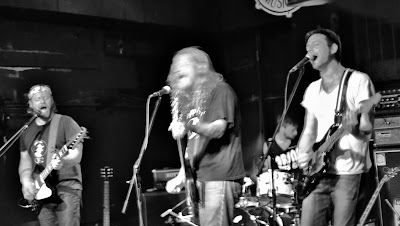 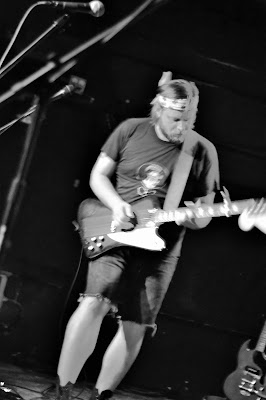 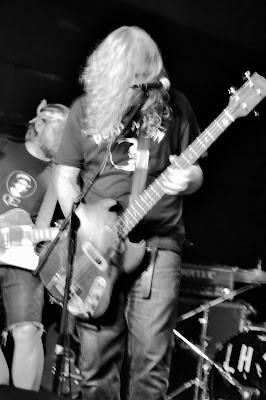