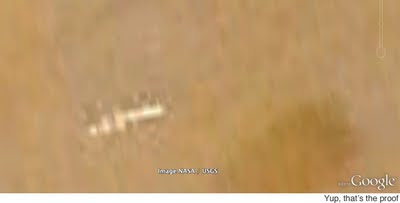 Recently, we've all been reading about the discovery of a "station" of some sorts on Mars by self-described "armchair astronomer" David Martines (and really, people, much more than just a "guy who recently discovered Google Mars and has way too much time on his hands"). This has been making waves throughout the scientific community... see here and here (nothing on Google Scholar yet). The station, named "Bio Station Alpha", is pictured above.

As a scientist (with a laptop), I have taken it upon myself to pick up the mantle of this rather important and astounding research. Believe me, I am as suprised as anyone to now report to you that I have already stumbled across what is perhaps an even more momentous discovery than that of Mr. Martines.

This isn't pixels, or "cosmic ray streaks" ("experts" pfahhh!!). There is NO doubt!

They appear bipedal, and seem to travel in pairs. And by my estimate, they may be as tall as 800 feet! Perhaps the lighter gravity on Mars allows such a massive organisms to survive without collapsing under the their own weight.

While I am not quite the astronomer that Mr. Martines is (my PhD is only in zoology), I believe the approximate Martian coordinates at which these life forms were spotted earlier this evening are as follows: 1°13’14.59” S, 3°20’50.42” W (although judging by their scale and presumed locomotory ability, they may have moved several hundred miles from that location by press time).

So without further ado (I'm sorry, this can't wait on "peer review"), here is the first unequivocal photographic proof... not simply of a "space station", or some unknown structure... but of LIFE on MARS!! 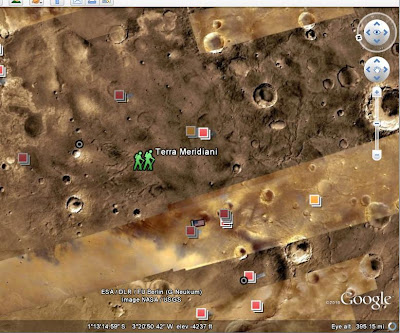 And here's a zoomed in image: 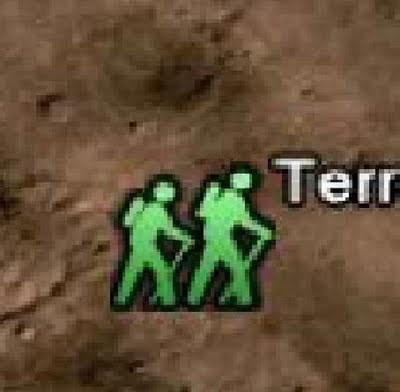 Looking at the relative scale of these Martians, I now believe that the "station" discovered by Mr. Martines may not be a permanent structure such as a station. It may, in fact, be some form of temporary shelter from the sandstorms and otherwise harsh conditions and cold nights of the Martian desert.